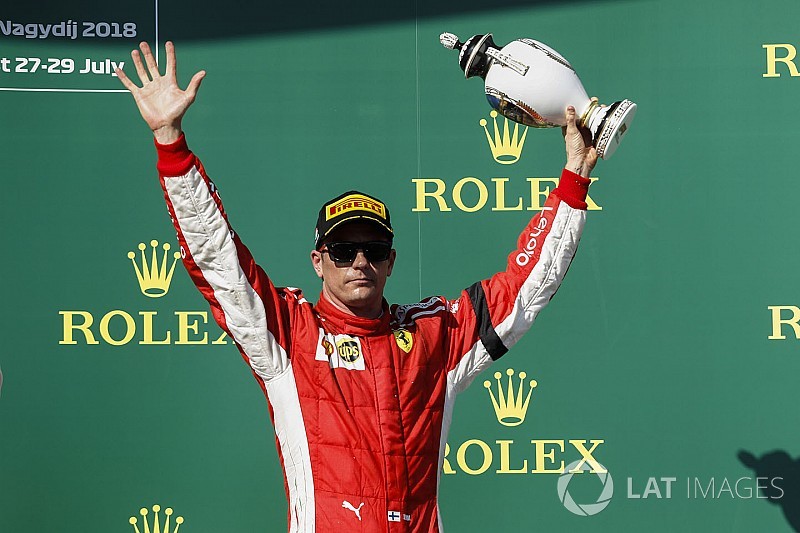 Kimi Raikkonen says he does not feel his Hungarian Grand Prix podium was "a very happy finish" or a "very good" Formula 1 race.

The Ferrari driver was third at the Hungaroring, one place behind teammate Sebastian Vettel as Mercedes' Lewis Hamilton took a second successive victory.

Ferrari was favourite for the Hungarian GP as the circuit suits its car better than Mercedes, but its two drivers were only able to salvage second and third late on as Valtteri Bottas's tyres faded.

"It doesn't really feel like a very good race, even being in third place," said Raikkonen, who scored his ninth podium at the circuit with an alternative two-stop strategy to the other leaders' one-stop.

"I think we had very good speed but what happened [in qualifying] and after the start we were [only] able to use our speed when we were catching up.

"Apart from that you are offset in the position and you know you're going to be stuck when you catch up.

"It worked out kind of OK, because I was giving a hard time to Valtteri and Seb so they never had the freedom to slow down and take care of their tyres and it paid off, it bought one place.

"It was fun to push, because I stopped twice [the tyres] lasted well and was able to go full speed.

"It doesn't really feel like a very happy finish, but as a team we scored decent points."

Raikkonen said Ferrari needed to improve and "tidy up" a few things to ensure it maximises the speed of its 2018 package, which has been quicker than Mercedes two weekends in a row but failed to turn that into victory.

The Finn also had to complete the race without being able to drink from his water bottle as Ferrari had forgotten to connect it before the start.

Asked how demanding that was, Raikkonen said: "It wasn't really.

"It's nice to get some water in the mouth sometimes, a drink every now and then. It didn't happen today but it wasn't an issue, not a big deal in the end.

"The race went pretty quickly, we were pushing all the time."

How Mercedes stole a win in Ferrari territory