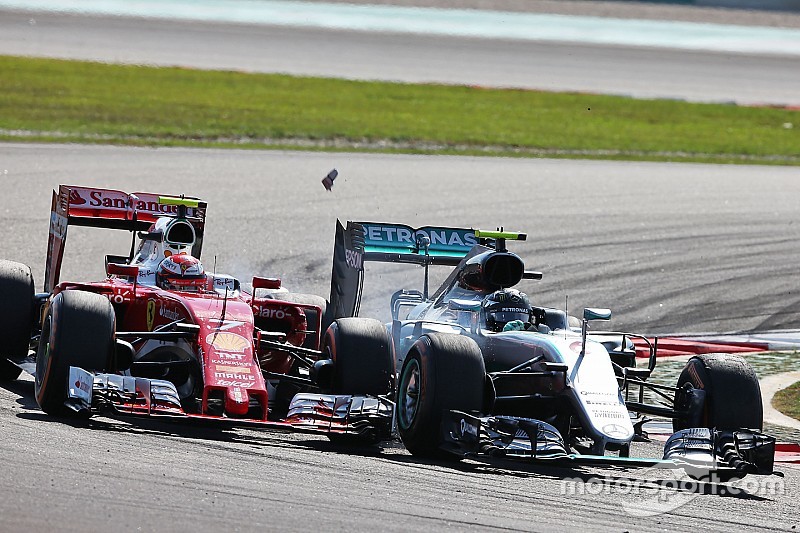 Ferrari has revealed that Kimi Raikkonen's car was losing three tenths of a second per lap following his clash with Nico Rosberg at the Malaysian Grand Prix.

Rosberg barged his way past Raikkonen at Turn 2, with the impact being enough to earn the Mercedes driver a 10-second penalty.

But with Raikkonen's pace subsequently hampered by the bits that broke on his car, Rosberg was able to open up around a 12-second advantage, enough to ensure that he did not lose a position.

Ferrari team principal Maurizio Arrivabene has revealed that Raikkonen ultimately had little hope of holding on to his Mercedes rival with his pace suffering each lap.

"From the calculations we have now with the engineers, he lost more or less 10 points [of downforce] - so it was quite impossible for him to catch up in this situation.

"But having said so, he was making a very good lap even with damage in the car. We tried from the pitwall to do all our best also with the strategy, but the others were doing the same - we were aggressive, they were aggressive, we slowed down, they slowed down.

"So it is a pity that Kimi was not able to go to the podium. But after the impact, all the chances they were gone."

As a rough calculation, three points of downforce is equivalent to one tenth of a second, so Raikkonen's lost 10 points would equate to just more than three tenths of a second.

Massa says Bottas result shows what could have been