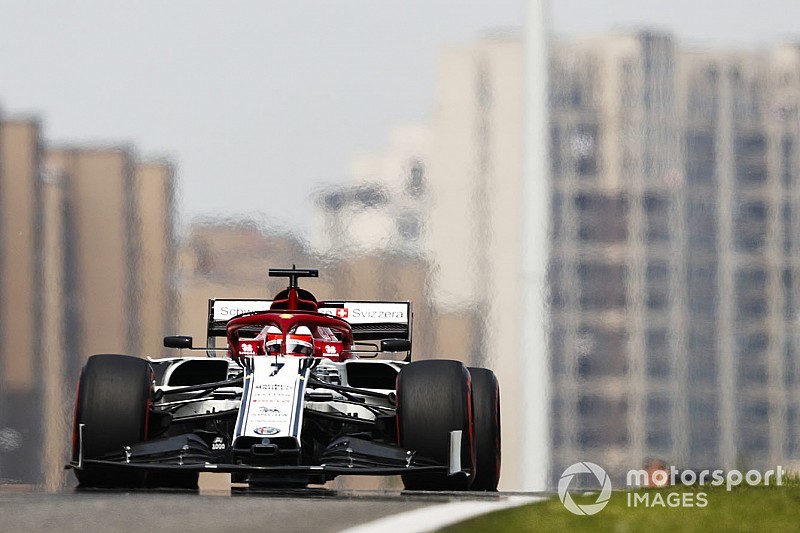 Kimi Raikkonen reckons losing temperature in his front tyres cost him the chance of finishing as best of the rest behind the top three teams in the Chinese Grand Prix.

The Finn came home right behind seventh-placed Daniel Ricciardo and eighth-placed Sergio Perez in Shanghai to claim the ninth spot.

But he reckons he would have had a chance of overhauling the pair of them if he had not lost temperature in his rubber in the closing stages.

Speaking to Motorsport.com, Raikkonen said that his Alfa Romeo felt strong on race pace as he pushed through the field following a disappointing qualifying.

"Obviously we at least got a few points and it is better than yesterday for sure," he said. "The car was handling pretty nicely, but in the end I just lost temperature in my front tyres.

"I think with my tyres the wear was very good, but it got too cold and I lost the grip in the front so I couldn't any more push.

"It was a bit of a shame as I felt we could quite easily have caught up with the other cars, but it didn't work out at the end."

While Raikkonen added to his points tally that leaves him seventh place in the world championship standings – just one point behind Red Bull's Pierre Gasly – his teammate Antonio Giovinazzi failed to finish in the top ten again.

After a frustrating weekend that was hampered by reliability woes, Giovinazzi came home 15th after failing to make enough progress from the back of the grid.

"I think China was not my weekend, to be honest," said the Italian. "It was a difficult weekend so far, and today we tried to make a different strategy compared to others to try to gain positions, but in the end it didn't work. This is it, and I just want it to be Baku."