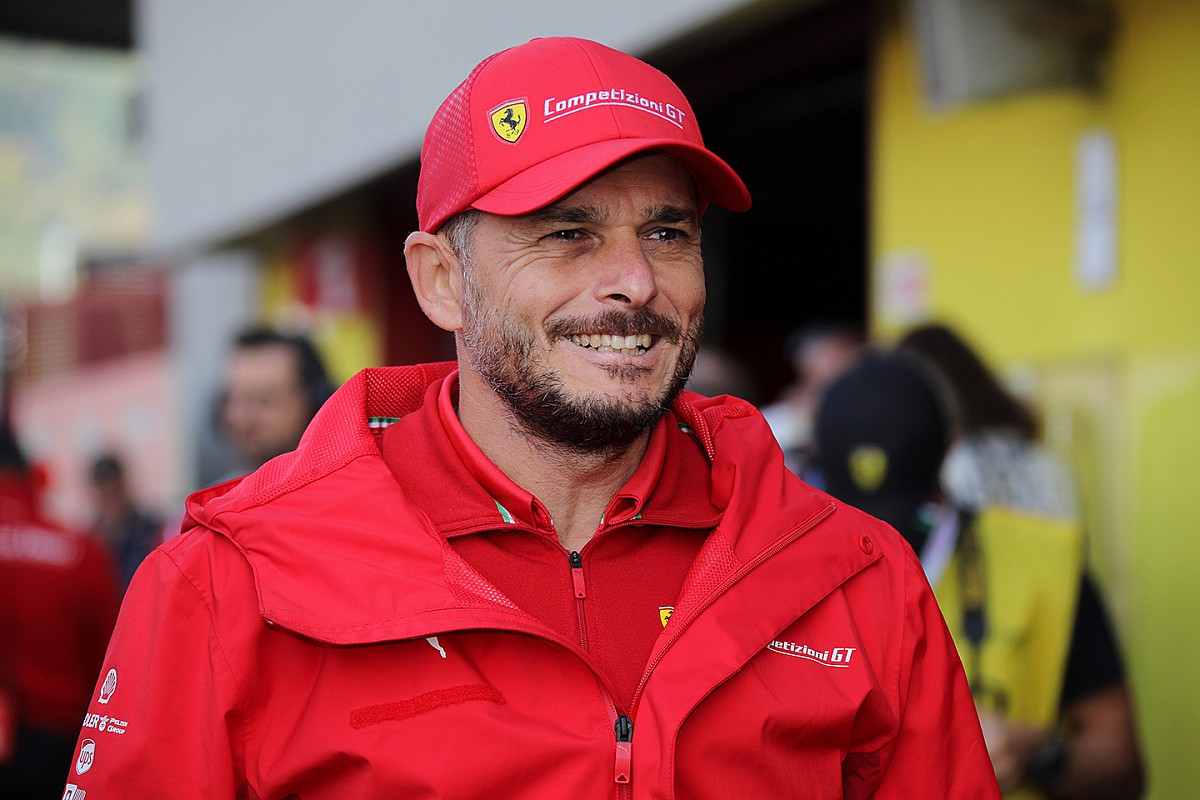 This week back in 2008, Lewis Hamilton took a famous victory in wet conditions at the Monaco Grand Prix. But on an afternoon when there were three different leaders, 21 overtakes, 37 pitstops and two safety car periods, there was another important statistic landmark: Giancarlo Fisichella started his 200th F1 race.

Although his afternoon ended in disappointment as he retired his Force India with gearbox problems on lap 36, we will take this moment to look at what the Italian got up to after calling time on his F1 career following five races with Ferrari in 2009. 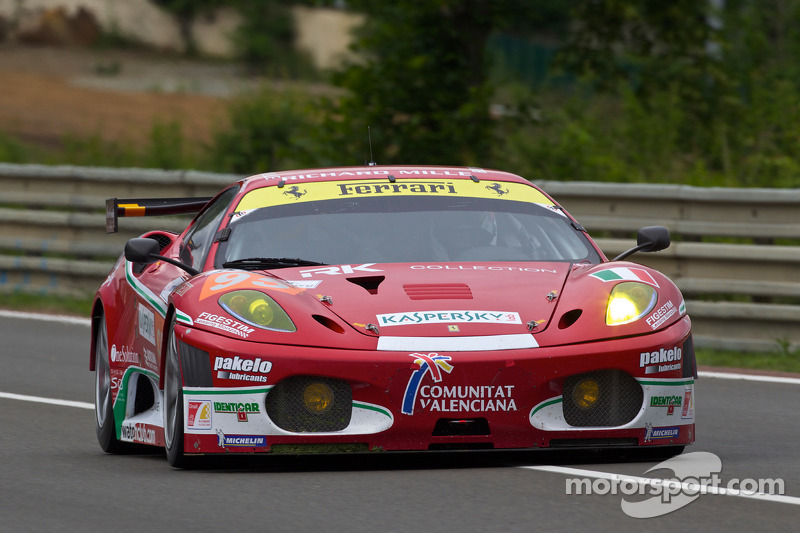 Having finished his F1 career with Ferrari, Fisichella had a good relationship with the Italian manufacturer and soon he was offered the opportunity to race Ferrari GT machinery in multiple series: ILMC (now WEC), American LMS (now IMSA), Le Mans Series (now ELMS) and the Le Mans 24 Hours.

He almost finished on the class podium in his first participation in the Le Mans 24 Hours. Driving for AF Corse together with Jean Alesi and Toni Vilander, the trio managed to bring their car home in fourth in the LMGT2 class (16th overall). With the same teammates, he was second in the standings in the Le Mans Series GT2 class. 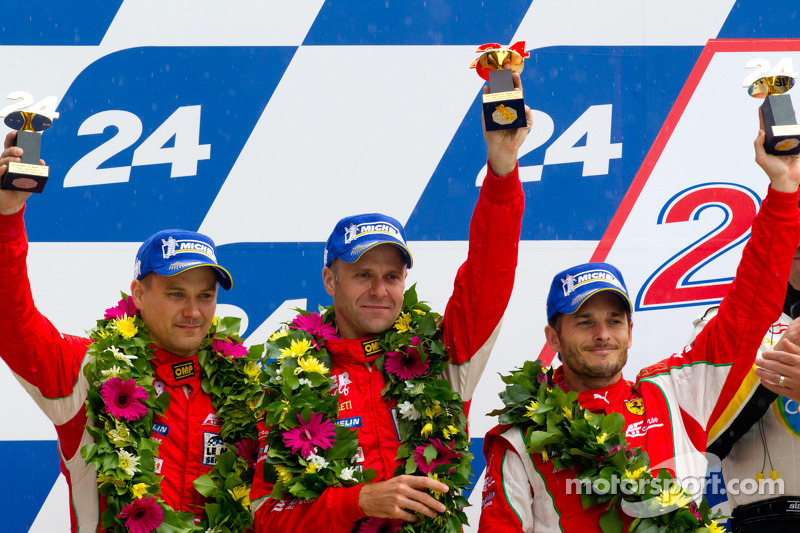 Fisichella on the podium at the Le Mans 24 Hours with Bruni and Vilander.

Fisichella had a very similar programme in 2011 as the previous year with AF Corse but this time he scored much better results. In the Le Mans Series he became champion together with Gianmaria Bruni, winning two races and taking two other podiums out of five races in the GTE Pro class.

In the Le Mans 24 Hours, he scored a second place in the GTE Pro class (13th overall), with he and Bruni joined by Toni Vilander. On the other side of the Atlantic, he finished his first Sebring 12 Hours in fifth place in the GT class. 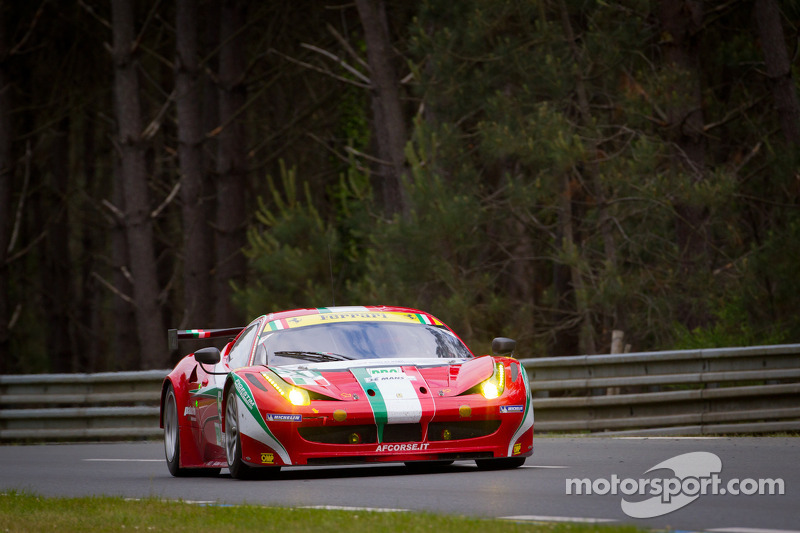 The winning Ferrari 458 Italia of Fisichella, Bruni and Vilander in the Le Mans 24 Hours.

In 2012 sights were set on the teams’ title in WEC (GTE Pro) with AF Corse. And with five wins and seven podiums, Fisichella and teammates Bruni and Vilander did the job with brilliance.

They also won the GTE Pro class in the Le Mans 24 Hours, three laps in front of another Ferrari. In the United States, the results didn’t come as hoped, 54th overall in the Daytona 24 Hours and a DNF in the Sebring 12 Hours. Fisichella raced sporadically in touring cars too that year, with two races in the Superstars series. 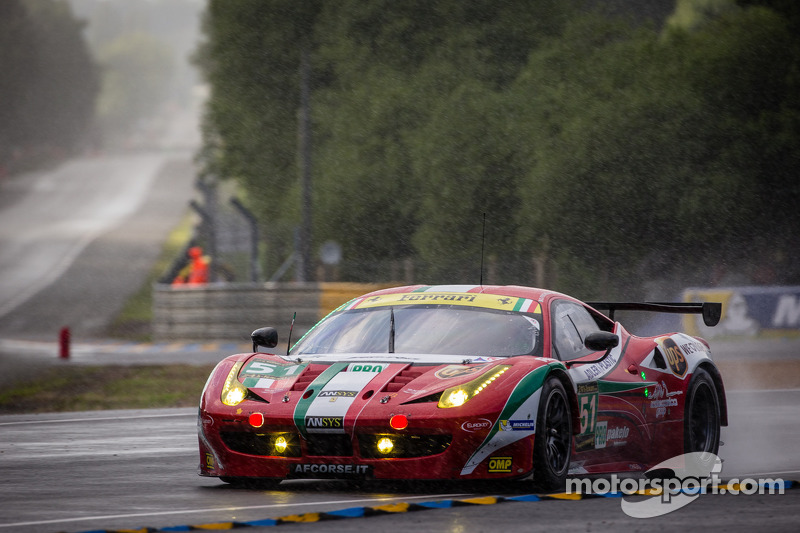 Fisico had clearly found his mojo in GT racing and endurance races in general. Defending AF Corse’s GT Pro ’12 title in the 2013 WEC season wasn’t easy, but together with Bruni, Vilander and Matteo Malucelli they managed to beat Aston Martin Racing in the end with two wins and three podiums.

The most important event though, the Le Mans 24 Hours, wasn’t for Fisichella and his teammates this time. They were only sixth in class with four laps fewer than the winning Porsche. It was a painful year in the Daytona 24 Hours race too, with a retirement after almost 23 hours. 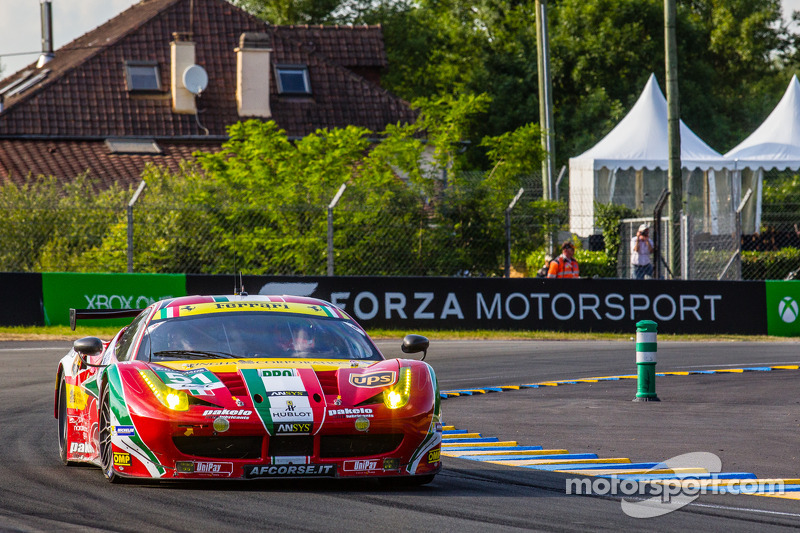 Nobody could beat the #51 Ferrari 458 Italia of AF Corse in the GTE Pro class at Le Mans.

In 2014, Fisichella’s focus changed towards the IMSA Tudor United SportsCar series with Risi Competizione in the GTLM class. Together with Bruni and Malucelli he had some up and down results.

From 11 races they won twice, stood four times on the podium and finished 13th in the standings, although neither the Daytona 24h nor the Sebring 12h races were a success. He also raced in the Le Mans 24 Hours. His experience and familiarity of teammates (Vilander and Bruni) made a big impact and helped deliver another class win with AF Corse. 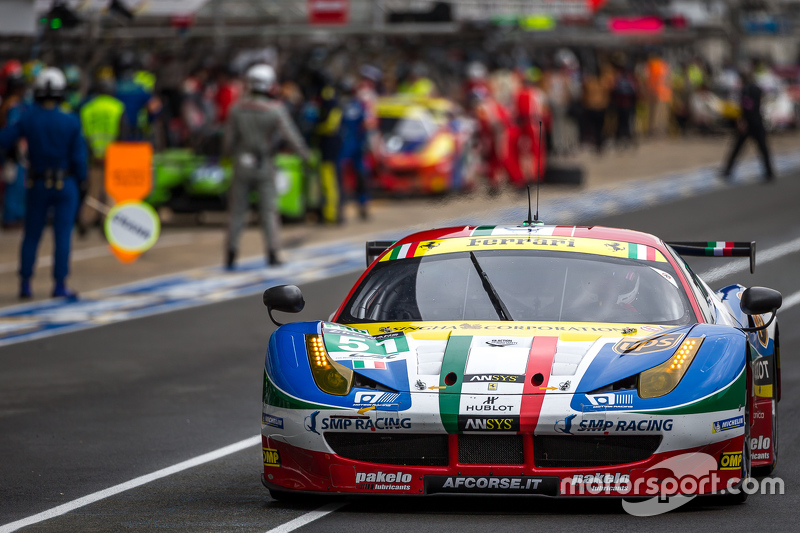 Another podium finish for Fisichella, Bruni and Vilander in the Le Mans 24 hours with AF Corse

An almost identical racing programme for him in 2015 with Risi Competizione, but the results were less good with only five podium finishes and no wins in the IMSA GTLM class. With Pierre Kaffer he finished fourth in the IMSA GTLM standings. Together with Andrea Bertolini, he and Kaffer managed a second place in the Sebring 12 Hours GTLM class, but once again the Daytona 24h was a disappointment with another retirement. His return to Le Mans with AF Corse was good for third in the GTE Pro class. 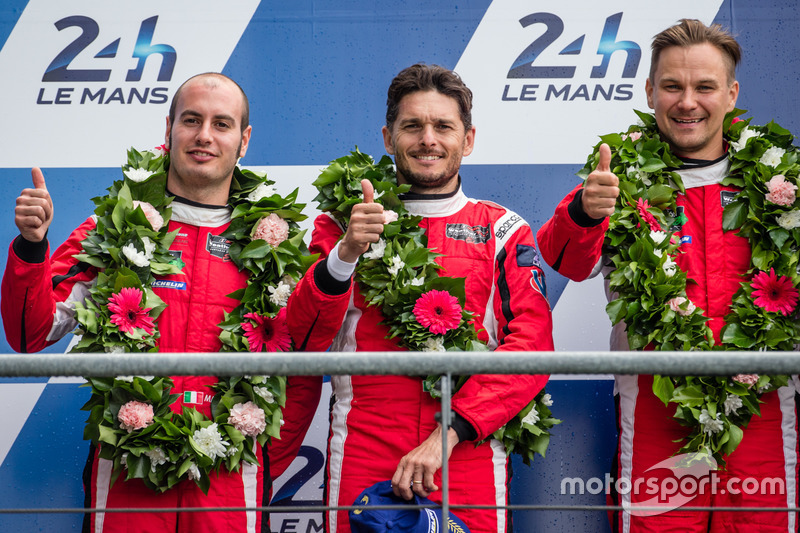 A bigger schedule was presented to Fisichella in 2016 as Ferrari wanted to win again in the Spa 24 Hours. His year started as usual in the IMSA GTLM class with Risi Competizione, but he had to wait until the final round at Petit Le Mans to score a class win with Vilander and James Calado.

With only one other podium finish together with Vilander, he and the Finn finished fifth in the GTLM standings. Back at Le Mans, things turned good again with his usual class podium finish. He was second in GTE Pro.

However, the attack at the Spa 24h with AF Corse in the Ferrari 488 GT3 was a disaster. Together with Motoaki Ishikawa, Lorenzo Bontempelli and Olivier Beretta they qualified 40th and their race was over after just 90 minutes. 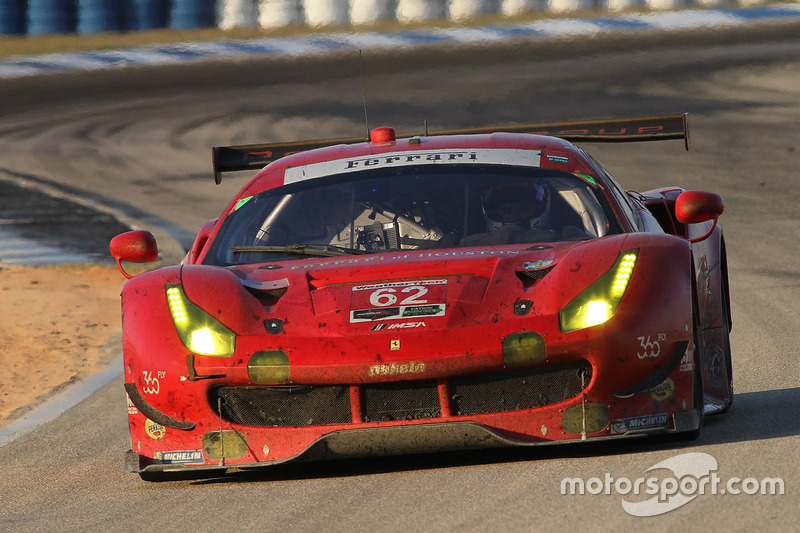 Photo ID: 1014764634 – At last a class podium finish in the Sebring 12 Hours for Fisichella with Risi Competizione.

2017 was similar to 2016 for Fisichella, but with more racing in Europe than in the USA. He finished both the Daytona 24 Hours and the Sebring 12 Hours third in the GTLM class with Risi Competizione.

He scored five podiums in the IMSA GTLM class and ended ninth in the championship together with Vilander. At Le Mans, for the first time in seven participations he had to retire after almost five hours of racing.

Together with Marco Cioci and Calado, he started from pole position in the Spa 24 Hours but they retired the Kaspersky Motorsport Ferrari 488 GT3 after 299 laps. Fisichella also entered four other Blancpain GT races with a fourth place at Monza as the best result. 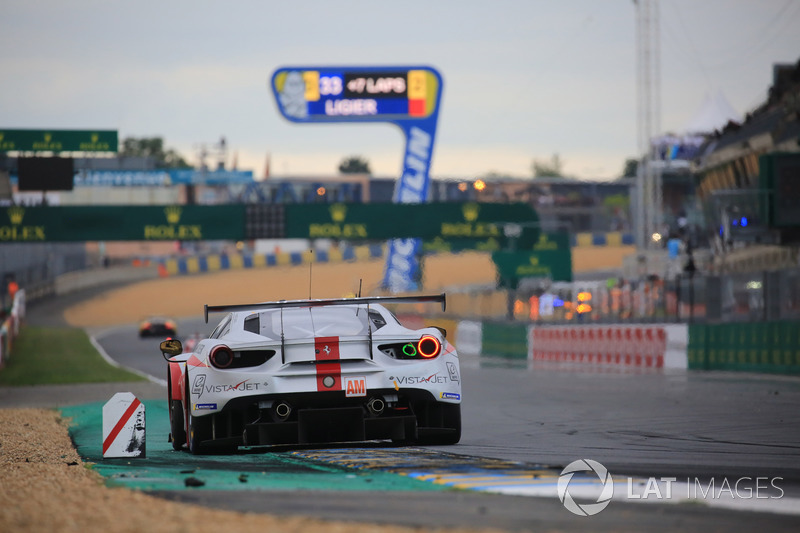 New teammates for Fisico in 2018 at Le Mans with Thomas Flohr and Castellaci but another class podium in the end for the Italian.

In 2018, he stopped racing in the IMSA series and raced for the first time in the Italian GT championship. With the Scuderia Baldini team, he won four races, scored five podiums and started twice from pole position. But he was only fifth in the points at the end of the year.

In the Le Mans 24 Hours, he raced this time in the GTE Am class as the Platinum driver with Thomas Flohr and Franco Castellacci. It was another Le Mans class podium for Fisico.

Next to the European action, he travelled to Australia in March where he raced in the Australian GT series on the support programme for the Australian GP. A podium in the first of the two races with Maranello Motorsport was a nice bonus. 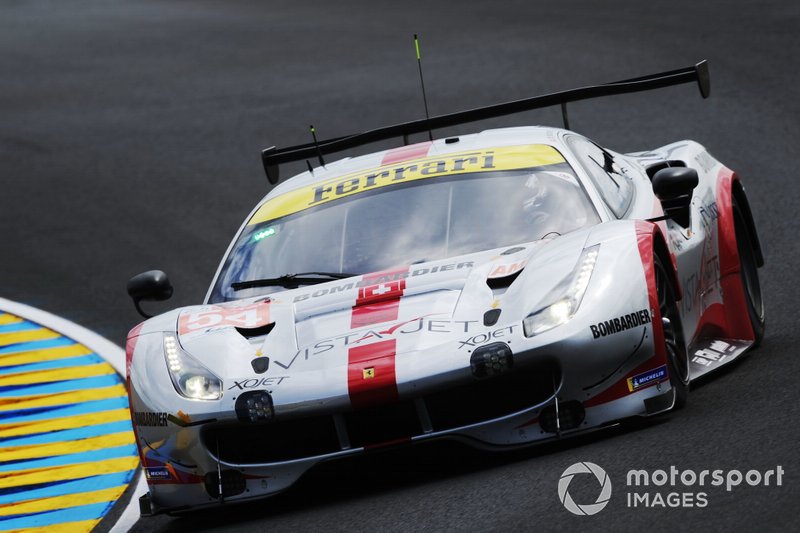 With Spirit of Race, he entered the WEC series in the GTE Am class. However, apart from a  Le Mans and another Sebring 12 Hour class podium, things didn’t work out as well as he hoped for. With Flohr and Castellacci he finished fourth in the 2018-2019 GTE Am standings. 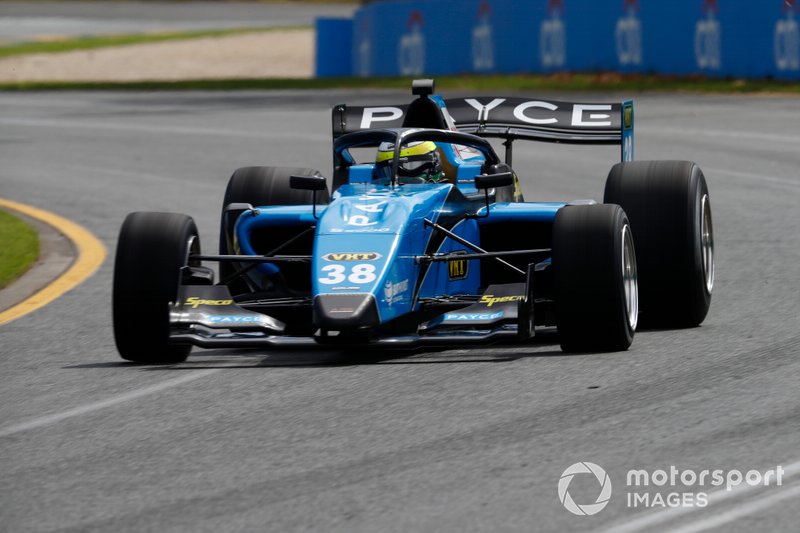 Giancarlo Fisichella’s comeback in a single seater, S5000 practice in Melbourne before the Australian F1 GP was cancelled.

Last year, Fisichella’s racing programme was similar to what he did 2018 apart from the addition of the Spa 24 Hours with Tempesta Racing.

In the WEC 2019-2020 season, he races with Flohr and Castellacci as he returned to the AF Corse team in the GTE Am class but there hasn’t been much success yet with five of the revised eight races completed.

In the Spa 24 Hours, he finally managed to finish on the podium in the Pro-Am Cup with Jonathan Hui, Eddie Cheever and Chris Froggatt, although they were only classified 40th in the overall result. Fisichella also raced again in the Italian GT3 Championship, scoring one podium out of three races at Vallelunga.

This year, apart from his WEC action, he was going to make a comeback in single seaters. He entered the S5000 series with GRM/Borland in the support programme for the Australian GP before the event was abandoned.

Fisico’s racing career at 47 is far from over though and it looks like there is plenty of good chances for him to add further trophies before he hangs up his helmet.