Räikkönen has taken his 19th GP victory in Abu Dhabi 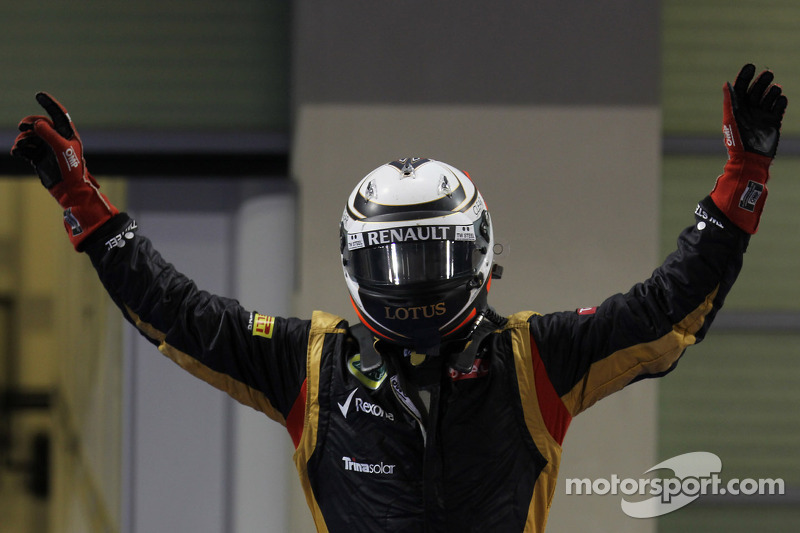 Kimi Räikkönen has taken his 19th Grand Prix victory - the 48th win for an Enstone team - with a glorious day-to-night victory in the Abu Dhabi Grand Prix. 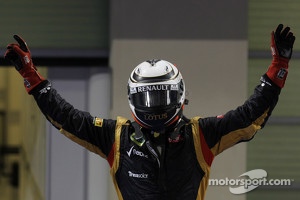 Kimi made an excellent start to take second place at the start from fourth on the grid, then capitalised when Lewis Hamilton's McLaren retired.

Romain Grosjean did not finish the race after being involved in an incident for which Sergio Perez was deemed responsible.

Kimi Räikkönen (P1, E20-05): "I'm very happy for the team, and for myself also. You never know what's going to happen during the race ; the safety cars made it quite tricky, but I've had similar races many, many times this year.

Today we had a clear circuit to be able to use our speed. Perhaps we were not the fastest at the end, but we were quick enough and consistent enough to win so it's great for the team.

We've had some difficult races in the second half of the season so it's fantastic to come back with a win."

Romain Grosjean (DNF, E20-03): "I am very happy for Kimi as it's the win we were waiting for and it's an unbelievable result for the whole team. For myself I'm disappointed as I was running pretty well.

It was a tight battle with three of us in a row at turn eleven, then Sergio [Perez] went off track at turn thirteen and came back on the inside at turn fourteen leaving me with no room to go anywhere else.

Mark [Webber] then came from behind and we touched; it was a big shame. A great day for the team, but an unlucky one for me."

Eric Boullier, Team Principal: "I have one word first of all : Great. Then there are many words such as 'relief' and 'deserved'. It's obviously a very well deserved result for the team.

I'm pleased for Kimi and he did a very good job. We've been pushing very hard all season and we've nearly had it before.

There's a little frustration not to have had a win sooner, and we have been waiting for it, but it's a fantastic feeling to finally take that victory and a superb reward for the team. It's great for Formula 1, it's great for Kimi and it's great for our team."

James Allison, Technical Director: "When you are as happy as this it is hard to avoid lapsing into cliché. Despite being tantalisingly close several times this year, we have waited a long time to return to the top step of the podium.

It is a massive tribute both to a flawless drive from Kimi and to the tenacity of the entire Enstone team for never having taken their eye off the prize all year.

With two races left in the season we go on to Austin with a spring in our step, invigorated to do it all over again and see what we can achieve."

Ricardo Penteado, Renault Sport F1 Team Support Leader: "It's just an awesome feeling to finally win a race ; the first victory for the Enstone-Viry partnership in its present configuration.

All season the chassis-engine package has been strong and everyone has worked incredibly hard in the last few weeks to successfully introduce new parts to get that last piece of performance.

It all worked out beautifully today and hats off to Kimi for judging it perfectly."

A remarkable comeback from Vettel to finish on Abu Dhabi's podium