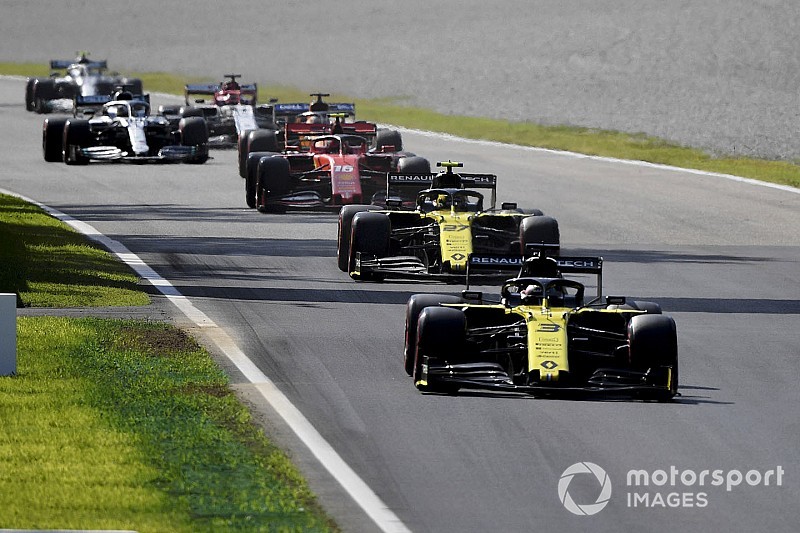 Formula 1 teams will meet with race director Michael Masi at the Singapore Grand Prix to try to find a solution to the problem of drivers backing each other up in qualifying.

The Q3 session at the Italian Grand Prix descended into a farce when the nine drivers left running all deliberately went slowly to try to not be at the front of the train – but in doing so most managed to time themselves out and not get another flying lap in.

While Nico Hulkenberg, Carlos Sainz and Lance Stroll were reprimanded for driving unnecessarily slowly, the race stewards also asked the FIA to seek ways to avoid a repeat scenario in the future.

Masi says that teams have already started working through simulations of ideas to resolve the matter after problems were first highlighted in Belgium, and a get together had been scheduled for the next F1 event to discuss the next steps

"It is something we discussed following Spa and I think everyone in the room, sporting directors and drivers, acknowledged that there is not a simple regulatory fix for it," explained Masi.

"We will have a more in-depth discussion in Singapore and a few of the teams have already come up with simulations and ideas of how that could possibly be rectified, because it is everyone's best interest."

Although Masi had warned drivers before qualifying in Italy that anyone going excessively slowly would risk being penalised, that was not enough to stop drivers trying to play games.

Masi that that it was hard to feel too let down by how the drivers behaved, though, because the competitive benefits of getting a slipstream were so obvious.

"At the end of the day they are all elite sportsmen trying to get the maximum out of it," he said. "We can all talk about gentleman's agreements and the rest of it, but the facts are, we can all acknowledge once the visor comes down they are all out there to do their best.

"I don't know if frustration is the right word but it's something we need to look at in more detail."

Back in 2013, a similar qualifying farce at a WTCC race at the Salzburgring, when drivers backed each other up and failed to complete a second flying lap, prompted the stewards to come down hard and charge them with bringing the sport in to disrepute. Fine and grid penalties were handed out to 14 drivers.

Masi said he could not judge why the stewards at Monza only opted to hand out reprimands for what happened, but pointed out that how the sport is dealt with nowadays is very different from six years ago.

Asked by Motorsport.com about the comparisons between the 2013 affair and what happened last weekend, Masi said: "I can't say what was in the stewards' mind because I wasn't in there. And it would be silly of me to try to comment about what was going through their head and what was happening.

"But I think the advantage that we have 2013 to 2019 is technology has evolved. We are very fortunate at an F1 GP in that we have a whole lot of different angles of cameras, telemetry, data, radio: every pretty much imaginable input.

"Times have changed a little bit generally. Looking at it even three years ago, there was a standard penalty: it was a drive through effectively for everything, and we have evolved as a sport as a whole

"I think trying to draw analogies to six years ago, and even in some regards trying to draw comparison with 12 months ago, things have really moved on and attitudes have changed."

Why the Ferrari dream is as good as over for Vettel