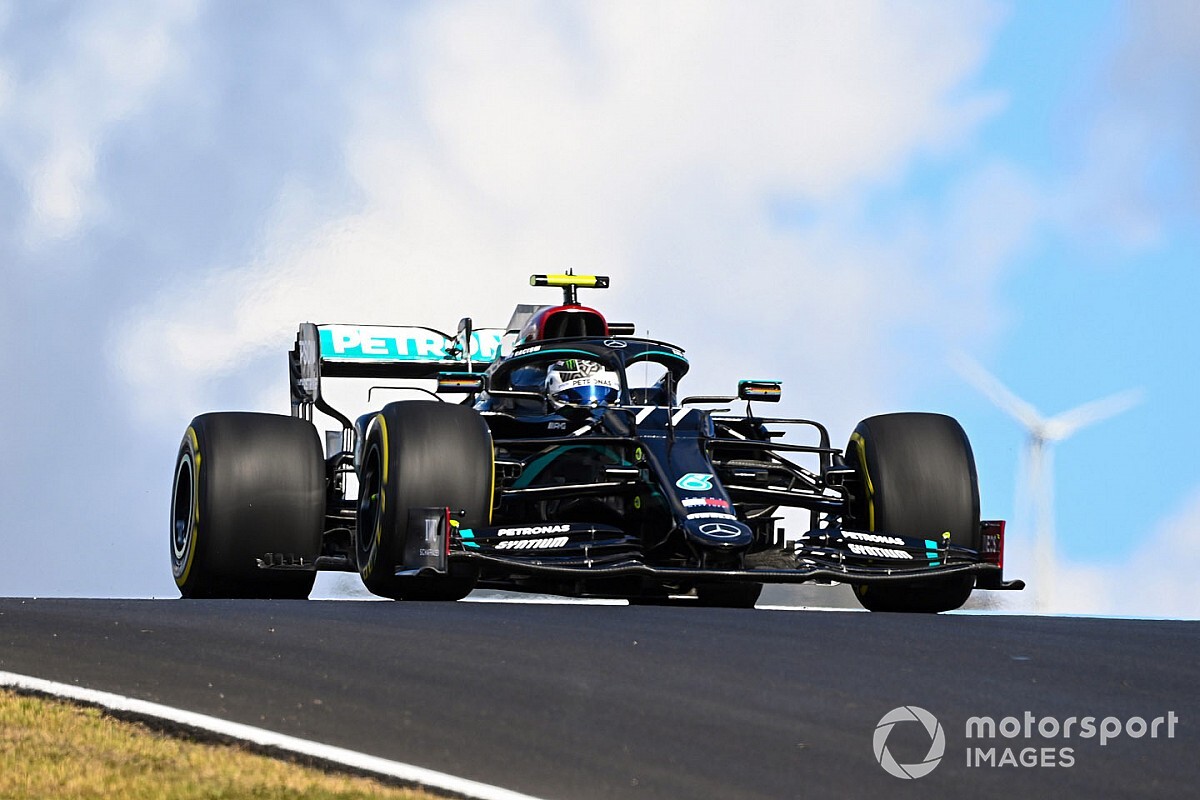 Bottas finished ahead of Verstappen and Lando Norris, with Lewis Hamilton sixth after having his first run on the soft tyres disrupted by traffic.

The first 30 minutes of the session were dedicated to running Pirelli's prototype C1 rubber that the manufacturer is working on for use in 2021, with all the drivers heading out early-on to try the unmarked tyres.

Hamilton and Romain Grosjean, who had a tripped through the gravel exiting the sharply downhill right of Turn 11 during these laps, scattering stones onto the track ahead of the uphill left of Turn 12, were among the drivers complaining about handling on the sample tyres.

The Mercedes driver reported a "big vibration" that meant he came in after completing just 12 laps on the experimental rubber, the least of any driver, while Grosjean reported "the balance is going out of control".

Verstappen ended up as the quickest driver on the 2021 tyres, with a 1m21.575s, which he set just before the opening 30 minutes were up.

After a brief lull as the pack came in to swap their 2021 tyres for the standard rubber in use for the rest of the weekend – Pirelli's C2 and C3 compounds – Gasly took the top spot before losing that time for exceeding track limits at Turn 4.

Vettel and George Russell then swapped places at the head of the times on the medium tyres before Gasly again went quickest – this time with a lap that stood, a 1m19.197s that was then usurped by Vettel's 1m19.175s.

Nicholas Latifi became the first driver in the event to fit the soft rubber after 40 minutes had passed, just before the Verstappen went back to the top on a 1m19.033s on the mediums, with the Williams quickly joined by the two Mercedes drivers on the red-walled tyres.

After Vettel and Daniil Kvyat had had brief spins at Turns 14 and 13 respectively, the attention turned to how much the Black Arrows would lower the FP2 benchmark.

But Hamilton quickly discovered that he would need two laps to warm up the C3 rubber sufficiently, and as he was having a second tour before starting his flyer Leclerc took the top spot on mediums with a 1m18.838s.

When Hamilton did finally start a flying effort he immediately posted the fastest time in the first sector, but had to back out of his lap after coming across a slow-going AlphaTauri at the tight right of Turn 8.

Bottas was following behind Hamilton but was able to complete his flying lap without interruption and took the P1 benchmark down to a 1m17.940s.

But that remained as the sessions quickest time as, shortly after Bottas crossed the line, the first red flag was called after Gasly's AlphaTauri caught fire as he rounded the Turn 13 hairpin early in the third sector.

The car had just lost drive as Gasly coasted through the turn, but then quickly became engulfed in flames, which led to a 15-minute disruption as the fire was put out and the car removed.

When the session restarted with just under 30 minutes remaining, the Mercedes drivers returned to the track on the softs, with Hamilton able to set his personal best with a 1m19.30s, which put him sixth at the time and 1.368s adrift of Bottas.

FP2 was then stopped again a few minutes later when Verstappen, who had also found he needed to take two warm-up laps to get the softs fully up to temperature, and Stroll clashed at the high-speed right of Turn 1.

Verstappen had let Stroll go by to complete a flying lap on the softs as they rounded the final turns on the lap before, and they ran side-by-side down the straight starting the next tour.

Both were using DRS as Verstappen stole to the inside, with the pair coming together at the apex and Stroll being spun off at high speed, into the gravel on the outside and out of the session.

Verstappen fumed on his team radio about the incident, which is currently under investigation by the stewards.

It took until there were just eight minutes remaining before the session restarted, with few drivers subsequently improving as the teams scrambled to gather what high-fuel, long-run data they could and left some without full qualifying simulations completed.

Verstappen's best time on the mediums from before the first red flag stood as his best in second behind Bottas, with Norris one of the few late improvers as he jumped to third, winding up 0.803s on the softs.

Leclerc's medium tyre effort was shuffled back to fourth, with Carlos Sainz, who had incurred Verstappen's ire by overtaking him down the pit straight at one stage before the Gasly red flag, also jumping up in the closing minutes to take fifth.

That pushed Vettel's best on the mediums down to sixth, ahead of Gasly's own best on the yellow-walled rubber, with Hamilton also moved down to eighth.

Esteban Ocon and Alex Albon were able to complete soft-tyre runs and ended up rounding out the top 10 with their efforts.

Daniel Ricciardo could only jump from the foot of the times to 13th during his closing-minutes run on the softs, as his first flying lap was ruined by a Williams exiting the pits as he came flashing into the right-hander.

Stroll's early best time on the hards remained his best in the session, which put him 19th in the final standings.