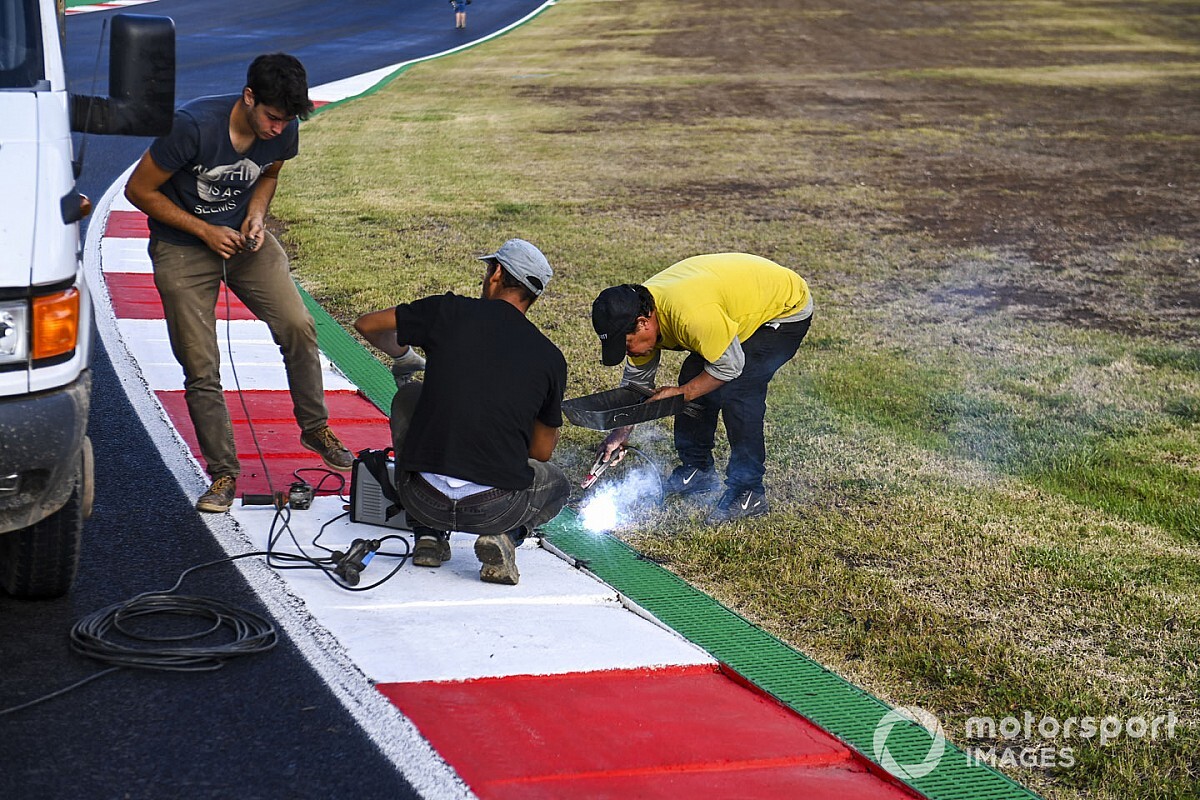 FIA Formula 1 race director Michael Masi believes the drain issue that stopped FP3 and caused qualifying to be delayed in Portugal had never been seen before.

The problem occurred at the final corner in the closing minutes of FP3, after Sebastian Vettel ran wide and appeared to flick the cover up.

While there have been instances of drain covers coming loose in the past on this occasion the problem was the concrete casing in which the cover sits. The start of qualifying was delayed by 30 minutes while repairs were made, and the rest of the circuit was checked.

Because the casing or frame around the cover was broken the decision was made to put a piece of plastic pipe in the opening and cover the whole thing with concrete to effect a speedy repair.

“It wasn't actually the drain cover per se, it was actually the concrete case underneath that collapsed.” said Masi. “And then what we saw sticking up was the drain cover itself. As soon as it was noticed, FP3 was obviously suspended, it couldn't continue, and a repair was undertaken to that area. Further checks were undertaken for a number of other drains at exactly the same point in time.

“It's something we haven't really seen before, a collapse of that nature. So we checked all the other drains with all of the officials around the circuit, that was the most efficient way to get that done. There were a couple of other cracks that were identified and repaired immediately.

“And, obviously, where the drain itself was at the Turn 14 on the left-hand side repair was undertaken with putting plastic pipe in and filling it with concrete, and then a quickset concrete on top of that, and trying to get that dry as quick as possible. So that meant a slight delay to qualifying. But in the circumstances, better to have that done and everything else checked.

“As soon as the last activity was completed today, further checks were undertaken around the entire circuit for all drains, just as a further precaution.”

Masi believes that the problem came to light because of the downforce generated by F1 cars.

“I'd suggest so,” he said. “We probably don't appreciate the forces that an F1 car generates. And it was certainly unforeseen, is probably the best way to put it, considering the circuit has had a significant number of upgrades done to it for this event, including the entire resurfacing of the circuit, as well as a number of safety barrier upgrades. And all of the drains were also checked at the same point in time.”

GPDA director Romain Grosjean, who hit a loose drain cover with his Haas in Malaysia in 2017, said he was confident before returning to the track that the repairs had been properly completed.

He added that it wasn’t the job of the drivers to get involved in inspecting tracks.

“I think I was confident the job was done properly and that everyone at the FIA and the circuit sorted the problem out,” said the Frenchman.

“I think the GPDA does the maximum that we can do. But the FIA has got a track inspection section. They do the job. You know it's not up to us.

"After coming to a racetrack we can give our feedback. But I don't think it's up to us to come and do it. Unless we start getting paid as a job, because that is a job, and we would have to send someone. I don't think that would happen.”