Vettel stopped four times en route to a sixth place finish, having lost time with a spin and sustained damage following contact with another competitor on the opening lap. 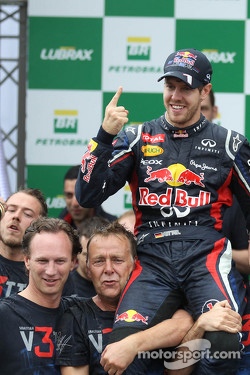 The P Zero Silver hard tyres and P Zero White medium were nominated for the race, while the Cinturato Green intermediates and Cinturato Blue full wets were also used.

All the drivers started on the medium tyre apart from Michael Schumacher (Mercedes), Kamui Kobayashi (Sauber) and Romain Grosjean (Lotus), who began on the hard tyre.

The race started in ambient temperatures of 19 degrees with light drizzle, but the rain intensified during the first 10 laps. Lotus driver Kimi Raikkonen was the first to pit for Cinturato Green intermediates, on lap five, followed progressively by many other drivers all the way down the field.

Button, who claimed an early lead from second on the grid, stayed out on the medium tyres while the rain fell.

The different strategies shook up the established order: the Caterham of Heikki Kovalainen running as high as sixth overall, ahead of the Marussia of Timo Glock in seventh – who also both remained on the slicks until laps 15 and 14 respectively.

When the safety car came out for 10 laps, Button pitted on lap 23 for hard tyres while the track still remained damp as the rain eased off. In the closing stages of the race, the rain returned with a vengeance, meaning that it was no longer possible to stay out on the slicks.

On lap 50 Mercedes driver Nico Rosberg went onto the intermediates, while Vettel stopped for medium tyres on lap 52 and then two laps later for intermediates as the rain fell harder.

On lap 57 Button made his second and final stop onto intermediate tyres without losing the lead. Toro Rosso’s Daniel Ricciardo and Kovalainen ended the race on the Cinturato Blue full wet tyre.

The regulations state that drivers have to use both slick compounds during the race unless they have used either the intermediate or wet tyre. Button was the only finisher to stop just twice: all the others made at least one more stop.

Pirelli’s motorsport director Paul Hembery concluded: “On this day 11 years ago we won the World Rally Championship with Richard Burns, so it is quite fitting that today we have seen another truly dramatic title-decider, here in Interlagos.

The weather played a huge part in proceedings, forcing the teams to alter their strategy and react to the changing conditions.

The teams faced a particularly hard task because conditions in free practice and qualifying were a lot warmer and much drier, so today was a step into the unknown.

With the weather so unpredictable, some teams used strategy by putting one driver on slicks and the other on intermediates, in order to have real-time data about the relative performance of the tyres.

A further variable affecting the tyre strategy was also the lengthy safety car period in the first half of the race, which reduced the amount of wear with the cars still on heavy fuel.

Even when the rain was falling hard in the first half of the race, the medium tyres still generated enough heat and grip to enable Jenson Button to maintain control without going onto the intermediate.

Congratulations to Red Bull and Sebastian Vettel, who adapted their strategy calls brilliantly to changing circumstances, as well as to Fernando Alonso and Ferrari, who pushed them every inch of the way.

We’d also like to congratulate Jenson Button, who got the very best out of both the slick and the intermediate tyres, and take this opportunity to pay tribute to Michael Schumacher: a great champion and fantastic ambassador for the sport, who ended his final grand prix in the points.”

Sahara Force India's Hulkenberg competed for the victory at Interlagos