Competition on the one hand, and 'the show' on the other - Mark Webber

After the winter test period and the first two races of 2013, countless drivers and top teams including Red Bull and Mercedes complained loudly that disintegrating tyres are now overly and artificially dominating the sport.

Mark Webber sees it as a balance between competition on the one hand, and 'the show' on the other. 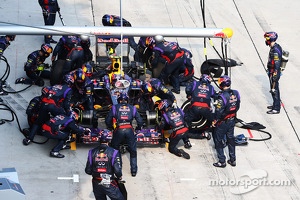 "I think it's quite good for the neutral, good for the fans and probably good for new people that are following Formula One," said the Australian.

"But for the old, let's say people who have more of a grasp of the sport and more education of where the sport was, it's still a little bit hit and miss."

The plain-speaking Red Bull driver's gripe is that F1 drivers are now becoming experts at tyre management, rather than flat-out sporting superstars.

"But at the moment we're driving at eight and a half tenths, eight tenths. The racing is completely around nursing and trying to make the tyres survive rather than driving a car on the limit. You don't see us really pushing on the limit (now).

"That's my little rant," he concluded.

Understandably, Pirelli is copping the brunt of the blame for the situation.

But former driver turned television pundit Brundle insisted: "They (Pirelli) have only done what was asked of them -- to make the race more exciting.

You don't see us really pushing on the limit (now).

"They could easily come out with hard tyres for the next Grand Prix. But do we really want that?" he is quoted by Speed Week.

"The balance has to be right. I don't think anybody wants to see boring one-stop races. On the other hand, five stops would be farcical.

"I think two to three stops is a good compromise," Brundle added.

"I can understand if some drivers are not happy -- we do want to see the fastest guy win, not the best at managing the tyres.

"It is a dilemma: should the sport have the upper-hand, or (should) the entertainment value? We must never forget that the first could not exist without the second," he said.

Amid the criticism and the pressure applied by big-hitters like Red Bull, Pirelli has agreed to "review" the situation after the Bahrain Grand Prix later this month.

But, in the end, Pirelli has the support of the ultimate decision-maker.

"Do you prefer the racing today, or when nobody was overtaking and everybody knew before the start, with a fair degree of certainty, who would win?" F1 chief executive Bernie Ecclestone told Brazil's O Estado de S.Paulo.

Ecclestone not worried about Bahrain unrest