Pirelli has revealed the teams' tyres choices for the first race of the 2016 F1 season, the Australian Grand Prix.

Under new regulations for this year, Pirelli chooses three sets of tyres for each grand prix, and the teams have freedom for the remaining 10 sets.

On Tuesday, Pirelli revealed all the choices for the season-opening race, showing some variety among both teams and teammates.

World champion Lewis Hamilton has selected just one set of medium tyres, while Mercedes teammate Nico Rosberg has opted for two sets of the white-marked rubber.

Hamilton will have six sets of softs to Rosberg's five, while both have chosen the same amount of supersofts (six).

Mercedes said that split tyre strategy was simply a team decision to help it evaluate all options on Friday.

"For tyre compounds, we’re just covering all our bases in terms of our Friday programme, to properly evaluate the available compounds," a team spokesman said.

Only Manor drivers Rio Haryanto and Pascal Wehrlein have opted to pick more than two sets of medium tyres, going for four each.

Apart from Rosberg and Hamilton, the only other two teammates to chose different sets are Sauber's Felipe Nasr and Marcus Ericsson and Haas drivers Romain Grosjean and Esteban Gutierrez. 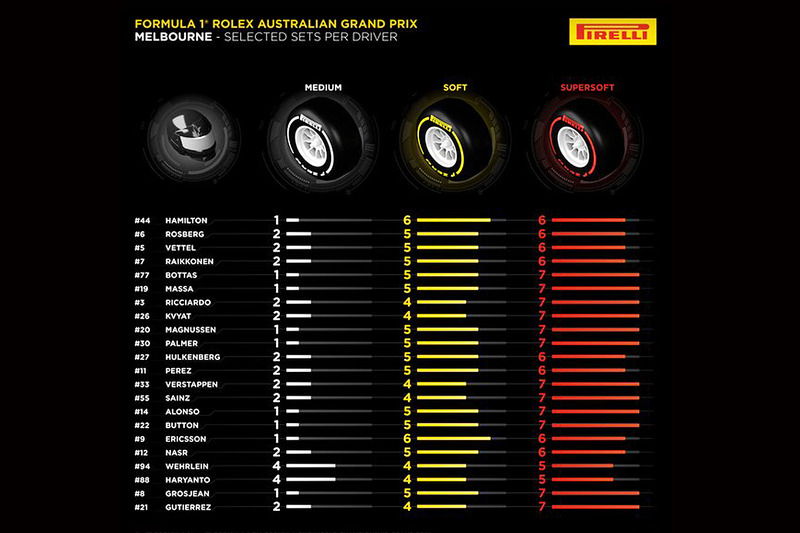