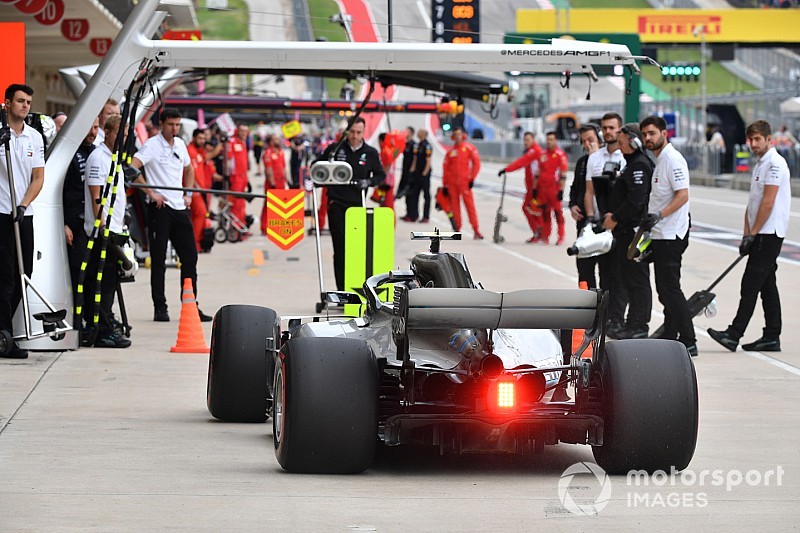 Pirelli has raised the minimum rear tyre pressures for the United States GP from 20.0 to 21.5 psi between qualifying and the race.

The unusual decision means tyre performance in the race could be a step into the unknown for the F1 teams.

Warmer weather on Sunday also means that information gathered by the teams yesterday could have less relevance.

Before a race weekend, Pirelli issues prescriptions that include minimum pressures and camber limits, and it reserves the right to make adjustments if necessary.

Usually that happens after Friday running, but because of the rain it had no dry tyre information until Saturday.

Due to parc ferme regulations, Pirelli can't mandate a camber change after qualifying, and thus has to rely solely on adjusting pressures to protect the rears, which suffered more than expected.

"We need to guarantee the integrity of our product, the system is just for that," Pirelli F1 boss Mario Isola told Motorsport.com.

"When we have a wet Friday like it was here we collect data from FP3 and qualy. The procedure is the usual one, so we compare the data we receive from the teams with the simulations.

"We started to analyse data immediately after FP3, and we were in a position to give feedback after a few hours, that is the usual system.

"We had a higher severity on the rear tyres compared with simulations, so we had to raise the pressure. It's not very big, but it's a sensitive change. If it happens on Saturday, we don't change the camber, we just review the pressure."

Asked what the impact might be in the race, Isola added: "It's not a big change in terms of balance.

"It's difficult to predict any effect also, because we don't have much data coming from the weekend. I didn't have any complaints or feedback from the teams."

After qualifying, Mercedes boss Toto Wolff made it clear that rear tyres could be the key to the race, especially with Kimi Raikkonen on a different starting tyre to the Mercedes drivers and his Ferrari teammate Sebastian Vettel.

"I think we've seen today in the long runs that the tyres are rear limited, so the car's rear limited," he said. "And that will be a topic tomorrow in the race, how to make the tyres last.

"Because strategy wise it's not completely clear what the optimum strategy is."