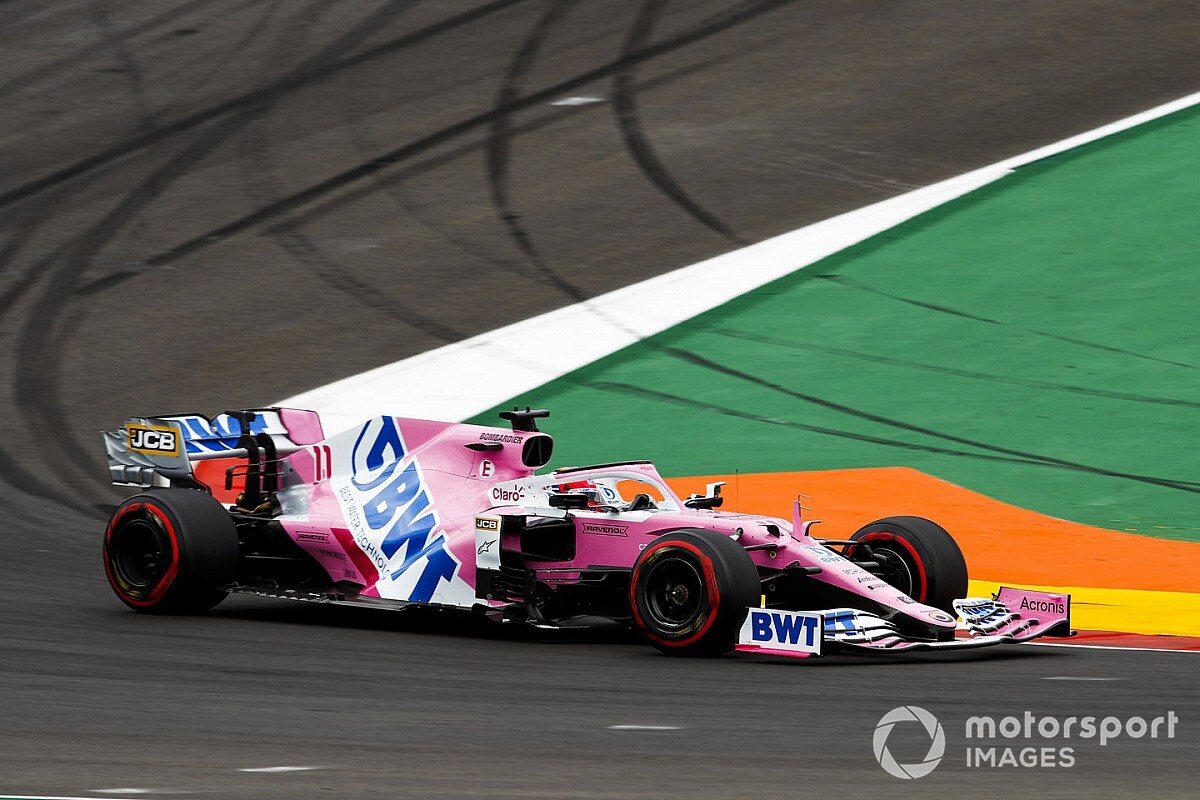 Racing Point Formula 1 driver Sergio Perez has received his second reprimand of the Portuguese GP weekend after a blocking incident involving Pierre Gasly towards the end of the race.

The Mexican also received a reprimand after an impeding incident in Saturday's qualifying session, and a third received within this season will trigger a 10-place grid penalty.

Perez was defending his fifth place in the closing laps when Gasly drafted up behind him on the run to the first corner. Perez moved to the inside when Gasly did, forcing the Frenchman to back out.

The AlphaTauri driver, who described the incident as "sketchy", was able to complete a passing move on the next lap to claim the position.

Blocking moves, and considered to be made too late, have been an ongoing talking point in drivers' briefings in recent seasons.

After speaking to both men the stewards made the unusual observation that Perez's move was not late and "fundamentally okay", but at the same time was "too close to the limit" given the speed differential. He was thus given a reprimand, rather than a more serious sanction.

In their decision the stewards noted "that on lap 64 of the race at the end of the main straight, Perez moved in defence at the exact same time that Gasly who was overtaking to the right having slipstreamed Perez down the straight. Gasly's move was made before the braking zone and was entirely reasonable.

"As Gasly was moving to the right with significantly greater speed, Perez moved to the right and then continued to move in front of Gasly for a significant portion of the track but stopped having left a car width to the inside.

"The Stewards noted that earlier this year, the drivers discussed 'late movement in reaction' moves and agreed that they were potentially very dangerous.

"The Stewards considered that this move was at the fastest portion of the track, but also noted that Perez did not move in reaction, but rather moved first or simultaneously. Further he is entitled to make a single defensive move, but such a move cannot constitute a danger to another driver.

"In the hearing, both drivers agreed that while on the limit, this manoeuvre was fundamentally okay and constituted racing at the limit. The Stewards however, believe that this was too close to that limit and that Perez had not sufficiently accounted for the speed differential.

"In selecting a penalty, the Stewards have taken into account the views of the drivers involved and ordered a Reprimand (Driving)."

Gasly admitted that he thought the incident would end with both cars off the road.

"It was a bit sketchy," he said after the race. "I don't know how it looks from the outside, so I need to see the footage, but the difference of speed at that moment is so big, I was probably 30kph faster than him.

"I decided to commit to the inside, and he really moved at the last moment. I jumped on the brakes but I did think, 'OK, we're both in the gravel.' I don't know how we managed to avoid contact.

"I was quite pissed off with him, so the next lap I really sent it round the outside, which was pretty good."