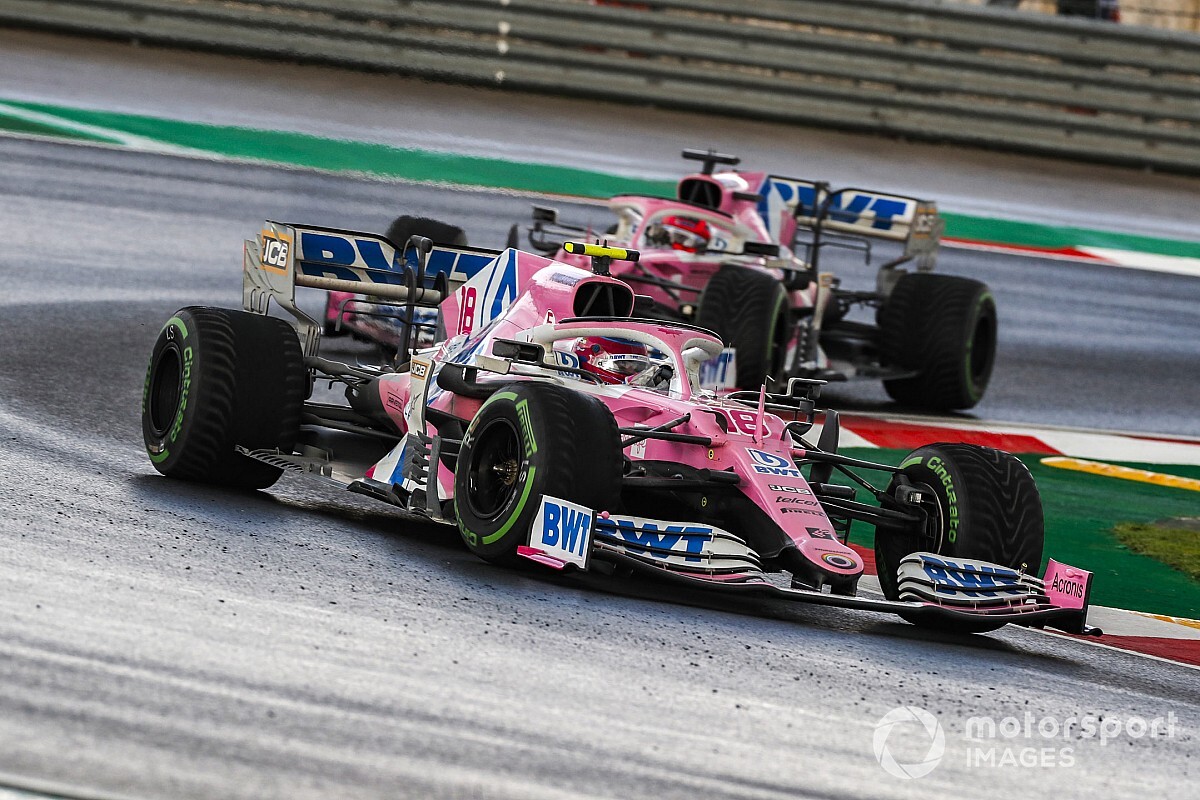 Sergio Perez says there were no team orders in place with Racing Point Formula 1 teammate Lance Stroll as they ran 1-2 in Sunday's Turkish Grand Prix.

Racing Point looked on course for a shock result at Istanbul Park on Sunday after Stroll and Perez surged into a healthy lead over the rest of the field in the opening stages of the race.

In low grip, rainy conditions, pole-sitter Stroll led Perez by more than 10 seconds at one stage, but came under pressure from his teammate as his first set of intermediate tyres neared the end of their life.

Just as Perez closed on the leader with 20 laps to go, Racing Point called Stroll into the pits for a second set of intermediates, only for them to grain quickly and cause the Canadian to fall back down the order.

Stroll ultimately finished the race ninth, while Perez went to the end of the race without pitting, taking second place behind Lewis Hamilton.

Perez stressed there were no team orders in place between the two Racing Point drivers during Sunday's race, and that their focus was on securing as many points as possible for the team to aid its bid for third place in the constructors' championship.

"No, we are in a very fight for third in the constructors, and that's really what matters to us," Perez said.

"So it was all about getting both cars as high as possible. I think the lead car at the time was Lance and at that time, we thought the best was to stop.

"That didn't work out for him, but in the end we managed to score good points. We outscored our competition and there's still three very important races for us in the championship."

Stroll was left puzzled and frustrated by his drop down the order after taking his second set of intermediates, saying they had grained immediately.

Racing Point was able to use the feedback Stroll gave them about the graining on the intermediates to aid Perez's strategy call, keeping the Mexican out and running him to the end on worn tyres.

"It was all about surviving on those inters, we were a bit stuck," Perez explained.

"We were expecting some more rain towards the end of the race, and at the same time we were suffering quite a bit with the inters.

"We were going through the graining phase, and I was able to control it after that. When he pitted, I was also [thinking of] the idea of trying another set because my set was pretty worn out.

"But then the team informed me that he grained straight away, and the pace was not coming so we decided to stay out.

"But in hindsight, probably, even how much we suffered in the final laps, we probably could have pitted for another set."