Throughout practice and qualifying drivers found that there is no grip if they stray off the rubbered-in racing line.

The consensus is that the prospect of an entertaining race will be compromised because drivers cannot move off line to attempt a pass.

“I think most importantly the surface is a joke,” said Perez when asked by Motorsport.com if there will be any passing in the race.

“On Sunday the racing is going be difficult. And you're going to have the drivers making mistakes because we've been put into this situation.”

In addition to Perez's comments, Fernando Alonso said that the track surface was “not F1 standards”, while Lando Norris suggested that it was “not good enough.”

Alonso revealed that the subject had been discussed in Friday night’s drivers’ briefing, and that the lack of grip had not improved on Saturday.

“It's still very difficult to go offline,” he said. “There's like rubble out of line, so it's going to be difficult. We said yesterday that the track, the tarmac, is not F1 standards.

“Nothing we can do. I think this weekend we need to put the show, but this has to change for next year. It's very difficult to race like this.” 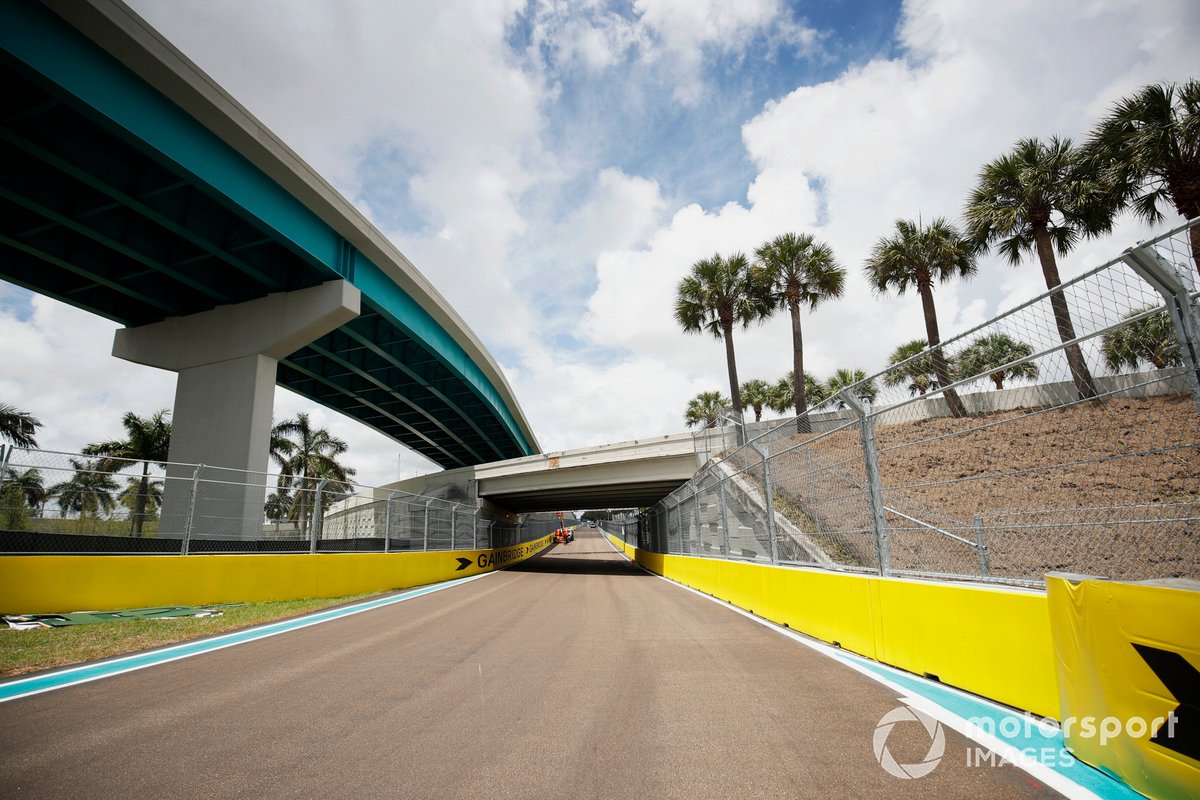 A view of the track

McLaren's Daniel Ricciardo agreed that it was not possible to stray off the racing line.

“You literally have to just stay on that one line,” he said. “Otherwise, you're not not really on the track anymore.

“So actually instead of kind of making it a kind of a good challenge, it just makes it a little bit, in a way, like one-dimensional, because you only have kind of that one option of that one line where a little bit of rubber building up. So I don't want to lie and say I like the surface.”

Ricciardo’s view was shared by his McLaren teammate Norris, who rued the fact that the race may not be as entertaining as fans had hoped for.

He also suggested that the organisers were “winging” it by trying something different with the track surface, which is made from local materials.

“On the racing line it's not bad grip, is reasonable-ish,” said the Englishman. “I think it's just very hot, which makes it feel even worse. The fact is just offline it's really, really terrible.

“And we come to the races, and there's so many fans here. And everyone expects such an amazing race. So when you come to it, and then they're trying something new with the surface, and something they've not really done before, then I think we end up in a position like we are.

"You don't want everyone to be exactly the same, every track, you like the differences, you like them to be unique.

“But when there's so much expectation, and you want good racing, and you want us to provide good racing and entertainment and everything, and then there's a surface, which they're trying and they just kind of winging it in a way to see what it's going to be like…

“It’s not good enough, because then we can't do what they require, we can't put on a good show. We can't race. It's not our fault, but it's a shame.”

Norris cited Jeddah as a track with a surface that provides ample grip.

“I think if it was a surface like we have in Saudi, for instance, it's just very high grip in general, it survives in hot temperatures, then I think everyone will be looking forward to an extremely exciting Sunday,” he said.