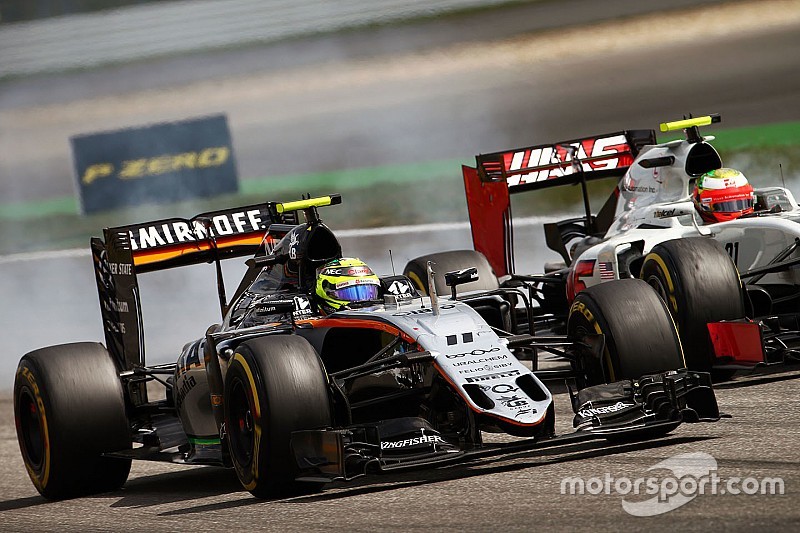 A switch to the Haas F1 team for 2017 has emerged as a serious option for Sergio Perez if he is unable to sort out a deal to remain at Force India by next week’s Japanese Grand Prix, sources have suggested.

Although Perez has a contract with Force India for next season, the deal does depend on the completion of commercial arrangements with his Mexican backers.

Speaking in Malaysia on Thursday, Perez had suggested that time was running out for those negotiations between his sponsors and the team to be concluded – as he hinted there could be possibilities elsewhere.

“It’s not a secret that I want to be here for next year, especially going to a new generation, and I believe in the team,” he said. “But whether it’s what I get in the end, I don’t know. But I’m sure I will find out before next week.

“At the moment I’m just concentrating on one team. There are some other options on the table, quite interesting options. At the moment I hope that it works out with one team, and if it doesn’t, then by next week obviously we will have to look at something else.

“I want to keep my career in F1 going. I cannot wait much longer. I expect everything should be done by next week.”

Although Perez would not elaborate on what the other options are, it is understood that one possibility being evaluated is for Perez and his backers to do a deal to join Romain Grosjean at Ferrari-powered Haas.

With Perez determined to be in the best possible position to secure a Ferrari seat for 2018 – which is why he has turned down a three-year offer of a switch to Renault – joining the American outfit would make sense.

Haas has a strong technical partnership with Ferrari, so would be the perfect place for the Mexican to show what he can do in case the Italian outfit needs to find a replacement for Kimi Raikkonen after next year.

A potential switch to Haas for Perez would be at the expense of compatriot Esteban Gutierrez – but one possibility then would be for him to take Perez’s place at Force India. Such a swap deal could be sweetened by sponsorship deals from their backers.

Sources with good knowledge of the situation have suggested that pulling off such a deal would be ‘difficult but not impossible’ – although they stressed that no formal talks had yet taken place.

Haas team principal Gunther Steiner has made it clear that his outfit is only interested in signing an experienced driver for next year – and was waiting to see whether or not suitable drivers do become available.

“We are in a good position to wait, and therefore we are waiting,” he said in Malaysia. “There is nothing moving a lot up that end, and when we get to hear is maybe the next day!”

Force India remains adamant, however, that Perez will be staying put for next season – as both he and Nico Hulkenberg have firm contracts.

Hulkenberg has been linked with Renault in recent weeks, however, as the French car manufacturer considers its option about who it wants to lead its works outfit in 2017.

But despite the seemingly strong contractual situation, it is intriguing that Pascal Wehrlein has asked his Manor bosses for more time before he makes a commitment for next year because he wants to wait to find out whether or not a vacancy at Force India does open up.

Mercedes Boss Toto Wolff: We don't want to dominate F1, we want to be the Jedis!