Perez: Hamilton "caught me at my worst time" in Turkey duel

Red Bull's Sergio Perez says Lewis Hamilton "caught me at my worst time" during the Turkish Grand Prix Formula 1 as he kept the Mercedes driver at bay after an "intense" battle.

On a wet track, Hamilton was trying to carve his way back through the field after a grid penalty made him start in 11th. By lap 35 Hamilton had moved up to fifth and launched an attack on Perez on Istanbul Park's back straight.

After the pair went wheel-to-wheel through the final corner combination, which almost forced Perez across the pit entry, he managed to hang on to fourth place into Turn 1 and kept Hamilton behind for the remainder of the race.

Perez revealed that Hamilton caught him at the worst possible time as he was struggling to keep his first set of intermediates working beyond the halfway point of the race.

"It was pretty intense at that point, because Lewis really caught me at my worst time of my of my race, because I was struggling so much with my tyres at that point," Perez explained.

"The first stint was so difficult for me, especially towards the end, and Lewis was pretty fast. I think he was at the time the fastest car on track, so to hold him back at that point was pretty challenging.

"We had a good fight, I had to even avoid the bollard on pit entry. But it was a good fight overall, and I managed to stay ahead."

With Hamilton resigned to fifth, Perez eventually finished behind Verstappen in third, taking his first podium since June's French Grand Prix after a rough patch in his maiden Red Bull campaign. 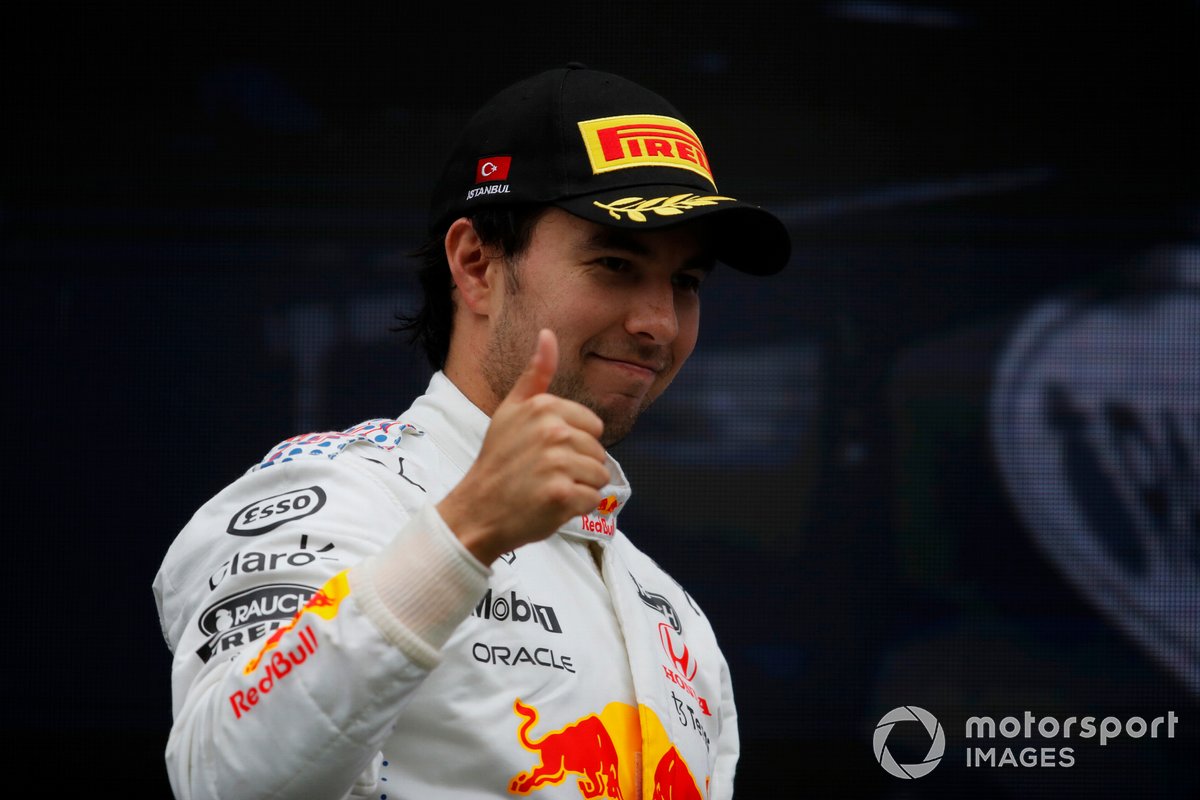 Asked if his first top three finish in nine races came as a relief, Perez said a podium had been coming for a while if it hadn't been for a streak of misfortune.

"Honestly, the last few races I've been so unlucky," he replied. "In Monza I finished on the podium, but I had the penalty. In Russia with three laps ago, I was on the podium.

"It's been coming already for many, many races. But certainly it's nice, especially in a race like today where I felt so uncomfortable with the car, and we didn't have quite the pace to match the Mercedes."

On Saturday Perez qualified down in seventh, half a second off Verstappen, after he was left with only one new set of tyres for the decisive Q3 shootout.

It proved a blip on an otherwise more competitive weekend for the Mexican, who believes he has turned a corner in terms of his own performance.

"Yeah, definitely. The whole weekend has been a lot more competitive," he said.

"In qualifying we didn't get the opportunity to show that because we were very aggressive with our strategy, so that put us on the back foot with the soft tyres in qualifying.

"And I think we just needed those couple of tenths that we had in in hand, because we've shown good pace throughout the weekend and I'm sure we could have had a much better qualifying.

"So, certainly I can see that the understanding [is there] and that I'm getting more together with the car."