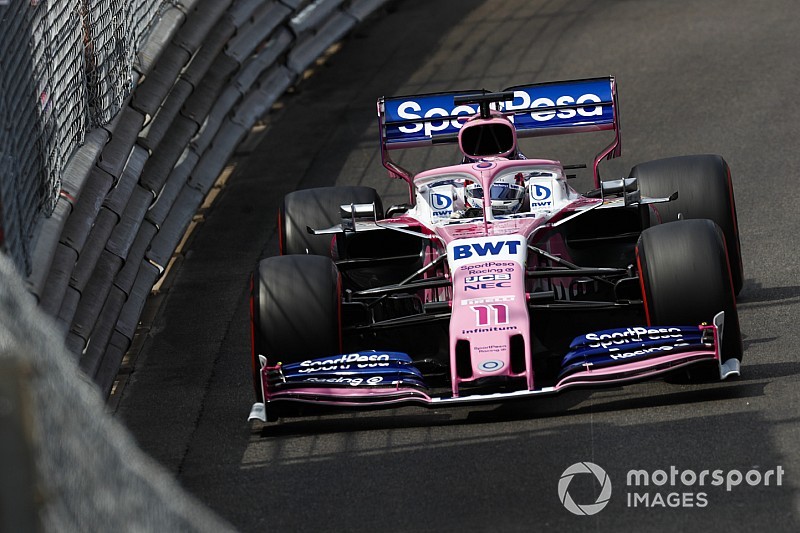 Sergio Perez feels that the Racing Point Formula 1 team will struggle for a good result in the Monaco Grand Prix, suggesting that without rain the race will be a "great pain".

Both Racing Point drivers have been short of pace throughout the weekend in Monte Carlo, resulting in Perez and Lance Stroll exiting qualifying at the first hurdle - ending up 17th and 18th on the timesheets.

Asked if rain was key to his team's fortunes during the race, Perez replied that "it's the only way" to potentially leave Monaco with a result.

"Hopefully the rain can help us and we can score some points. I think otherwise tomorrow, it's going to be a great pain," he said.

Perez felt that both he and Stroll would have made it into Q2 with a couple of extra tenths in performance, citing the close midfield pack in this year's field.

"In the last practice session we never seemed to be competitive enough unfortunately.

"There is a lot of work going on, so hopefully that can help us and we can get some points tomorrow. At the moment it's been a very frustrating weekend up to now.

"It's been quite challenging, very small margins - [if we had] two or three tenths to make it through and that would have changed the picture, unfortunately we were unable to get those tenths we needed today."

Stroll concurred, also finding traffic on his second hot lap, but also conceded that Racing Point was struggling for pace throughout the weekend.

The Canadian driver however refused to be drawn on whether the team's upgrade package had worked, suggesting that the nature of the Monaco circuit did not provide a representative picture of the team's performance level.

"It's not our weekend," said Stroll. "The car's struggling for pace.

"I definitely didn't get a good run, first run was fine - in terms of position it was the same but it was cleaner, but I think we could definitely have improved a lot on our second run.

"We're missing those two or three tenths to get into Q2 and progress our qualifying. Monaco's a unique place and I don't believe that it completely represents where our car is at.

"It's early days for the team and where the team's going, but we have to focus on tomorrow, it's a new day and hopefully a bit of rain will mix things up but ultimately not our weekend. There's things to look at and learn from."