Patrick Dempsey and Mario Andretti christen Circuit of The Americas 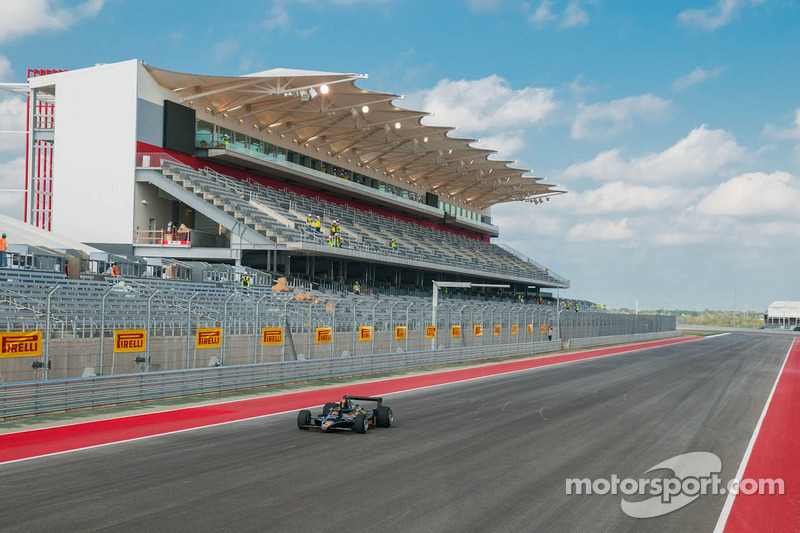 AUSTIN, Texas (Oct. 21, 2012) – Circuit of The Americas today began the final countdown to the 2012 FORMULA 1 UNITED STATES GRAND PRIX by officially christening its new, Grade 1 racing surface with a “First Lap Ceremony,” featuring a collection of celebrity drivers, local dignitaries and VIP clients, and a sampling of the types of race cars that will compete at the Circuit during the 2013 motorsports season. The invitation-only event was presented by Pirelli, the exclusive tire provider for Formula 1™ racing, and featured members of the Lotus F1 Team.

It’s everything I expected and more. The track is phenomenal.

It was a day of exploration and celebration at the premium sports and entertainment facility, which is nearing completion and will host its first F1™ event Nov. 16-17. The Circuit’s official ambassador—and former Formula One World Champion driver—Mario Andretti cut a black-and-white checkered banner that crossed the starting grid area before taking to the circuit in a Lotus 79 Formula 1 car—the very car in which Andretti won his World Championship. The anticipation on the legendary driver’s face was evident as he settled into the familiar vehicle, sped past the pit lane and raced up the steep, 133-foot climb leading to the Circuit’s signature first turn.

“It’s everything I expected and more,” Andretti said after his first practice laps. “The track is phenomenal. It has all the features that you are looking for, giving you the opportunity to overtake, while negotiating some tighter corners. You can tell a lot of thought has gone into it.”

Andretti, who is the last American driver to win the Formula One World Championship in 1978, relished the chance to check out the full circuit, which he did in numerous laps in a variety of cars. Andretti was originally scheduled to drive a modern Lotus F1 Team car, the R30, on the track; however, after technical issues were experienced during initial laps conducted by Lotus F1 Team test driver Jerome D’Ambrosio, the car was unable to run for the remainder of the day. 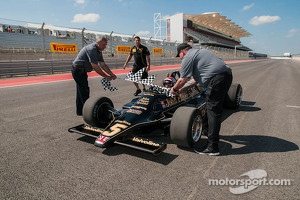 Following his time on the track, D’Ambrosio was excited about the Circuit and its main event, the FORMULA 1 UNITED STATES GRAND PRIX, which gets underway in less than a month.

“It’s been a great day today. There’s a real buzz about the Circuit of The Americas and it was fantastic to get out on track to demonstrate the R30,” D’Ambrosio said. “It’s a very enjoyable layout with a couple of really good places for overtaking, some long fast sweeping ‘S’ corners, and some really good high speed changes of direction like ‘Becketts’ in Silverstone. It was a shame not to get more laps, as an engine issue meant we were unable to continue running, but I had enough time to get a really good feel of the circuit. It’s an enjoyable track for a racing driver and also fantastic for the fans as the viewing areas are very well placed; there should be plenty of action.

“The first corner is quite special and it will be interesting to see it when people are dicing for position in the race. Austin is a superb city with a great atmosphere, and I think the city will live around Formula 1 for the week of the Grand Prix and that’s something we all can enjoy; it’s really going to be something quite special.”

Actor Patrick Dempsey, known for the role he plays on the television series Grey’s Anatomy, is also a sports car driver, road racer and racing team owner. He had his chance to take his turn in a Ferrari GT 2 while giving the “First Lap Ceremony” some star-studded power. 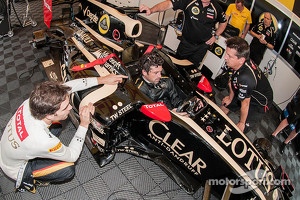 “It’s a very fast track with a great rhythm to it,” Dempsey noted. “For F1 it’s really important. I don’t think they’ve ever had a home base in America that has worked. It’s a really good opportunity for F1 to come back into this country and start a new tradition. This is a market that they need.”

After watching the professionals lay down some rubber, a number of special guests and media representatives had the chance to take a ride around the 3.4-mile circuit in a Pirelli 3-seater modified Jordan F1 car. Additionally, race cars representing series that will compete at the Circuit in the coming months, including the American LeMans, GRAND-AM and Ferrari Challenge series, took to the track for demonstrations.

During opening remarks, Circuit Chairman and founding partner Bobby Epstein thanked the thousands of workers who devoted the last two years to transforming 1,300 acres in Southeast Travis County, Texas, into a world-class destination for competition, entertainment and business. Epstein also expressed gratitude to the numerous public officials who supported the Circuit’s development and the positive economic impact it will have for Central Texas, including Austin Mayor Lee Leffingwell, Travis County Commissioner Margaret Gomez and State Comptroller Susan Combs, who addressed attendees. 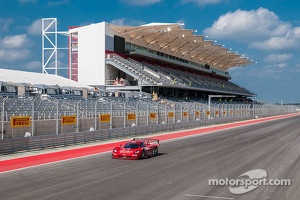 “These individuals had the wisdom to see the potential here in terms of what Circuit of The Americas will mean for job and revenue creation in our region,” Epstein said, “as well as the incredible boost the local tourism industry and business community will experience while hosting a Formula 1 event.”

San Antonio businessman Red McCombs, also one of the Circuit’s founding partners, beamed as he put the entire project in perspective. “It is a very exciting day. I’ve been excited since I was first introduced to this product and the fact that we now have it finished is a joy of mine,” McCombs said. “When I found out how Formula 1 is viewed everywhere else in the world, and the dramatic impact it has on the countries where it is run— it is their Super Bowl each year, it is their World Cup—I realized that Formula 1 has an identity that we need in the United States. And for us to be able to do this here in Austin is so exciting I just can’t wait for the people to be a part of that.

Source: Circuit of The Americas