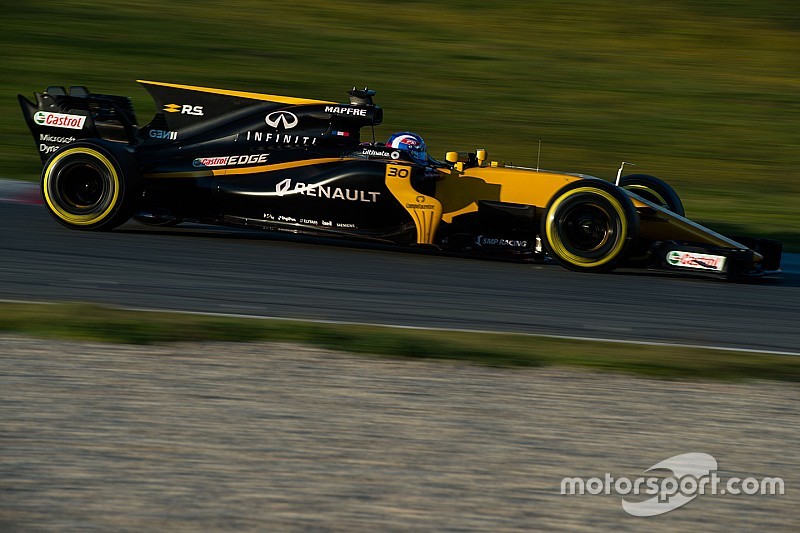 Jolyon Palmer says Renault finishing 2017's first Formula 1 test with both drivers inside the top eight was a pleasant surprise.

The French manufacturer returned to F1 as a works team last year following a protracted takeover of Lotus, and finished eighth in the constructors' championship having only scored points in three grands prix.

It has set its sights on moving up to fifth this year with its RS17, and Palmer and new teammate Nico Hulkenberg finished the first week of running at Barcelona sixth and eighth in the combined order.

After setting the third-fastest time on Thursday on soft tyres - ahead of Haas and Force India on super-softs and Sauber and McLaren on ultra-softs - Palmer said its form was not expected, even within the clouded nature of testing.

"It's a pleasant surprise at the moment," he said. "We still don't really know [the true order], obviously we've got a lot to come next week, but I'm sure everyone's got a lot.

"I think we've had quite a strong week, performance-wise, but we don't really know what everyone else is doing yet and we don't know what everyone's going to bring, updates next week and in Melbourne as well. We'll have to wait and see."

Renault's mileage on the opening day was limited by the lifespan of prototype versions of brake ducts, and the time to fly in and fit replacement parts cost it nearly all of the second morning as well.

Despite also losing time on the third morning when he spun, Palmer was encouraged by what he found in the new car.

"We didn't really get any really clean runs in the first couple of days, it was not a lot of performance running, just trying to build some miles on it," he said.

"I get the feeling that the car feels good, we've made a lot of gains pace-wise, on the timing sheets we look alright. We've got a lot more to come. I feel like we're in a good position."