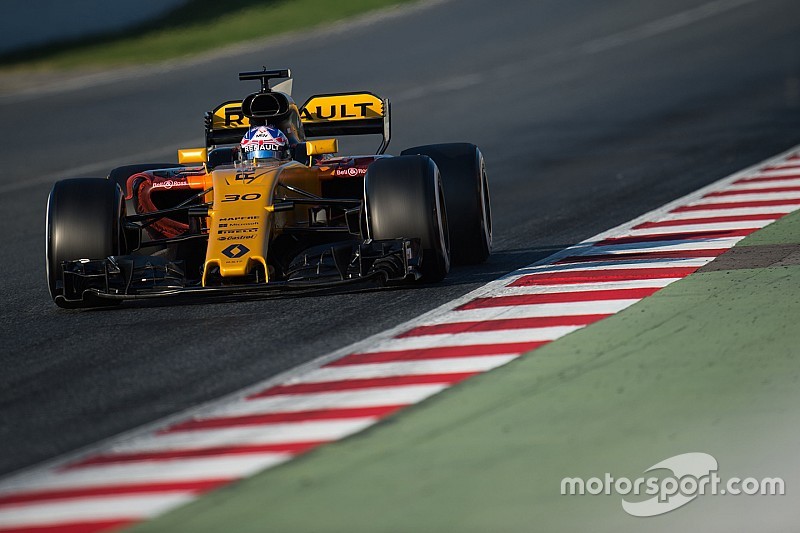 Renault has made a significant step with its 2017 Formula 1 car according to Jolyon Palmer, who has described the RS17 as "very driveable" and "compliant".

Based on its late takeover of Lotus, Renault’s first season back in F1 was run with a scarcely-updated version of the Enstone outfit’s Mercedes-powered 2015 car, and it struggled throughout the season.

The RS17 is not only the first car built to the revamped aerodynamic regulations, but also the first properly designed by Renault since it started rebuilding the team.

Asked about ride quality by Motorsport.com, Palmer said Renault has "made a good gain".

"The ride quality is where we were weak last year," he said. "We’ve made a big step this year. We’ve got much better tools to deal with that now.

"It’s something we learnt from last year, and we learnt the hard way. But clearly [at Barcelona], we’ve made good progress, and even just the balance of the car is very consistent, it’s very driveable.

"Every time I get in it, we know what to expect. It’s a good feeling at the moment."

Ferrari’s Sebastian Vettel compared the new breed of F1 cars to aspirin based on "fixing everything" compared to the 2016 machinery.

When that comment was relayed to Palmer, he stressed Renault’s gains went beyond having more aero and mechanical grip.

"If he had problems with his old car, he doesn’t know what the Renault was like last year," he joked.

"For us, it’s an even bigger step. I’m driving with such a big smile on my face at the moment, because the car feels so nice to drive.

"We know what to expect when we hit the brakes, when we turn in and the tools we’ve got to change the balance and the set-up are working really well."

Renault embarked on a major recruitment drive after purchasing the team that won titles bearing its name in 2005 and ’06, and it has also been investing in its facilities and technical resources.

Palmer made his F1 debut with Renault in 2016, and says the atmosphere within the team is "completely different" 12 months on.

"For a start, last year, we knew it was going to be tough," he said.

"This year, we’re excited about the prospect of having a car we’ve designed properly around the engine, we’ve had a good amount of time as well, because last year we were so compromised.

"There’s been some restructure over the winter, I think everyone in the team really knows their role, we’re very happy with how everyone’s performing.

"The structure’s working well at the moment and we’re excited."