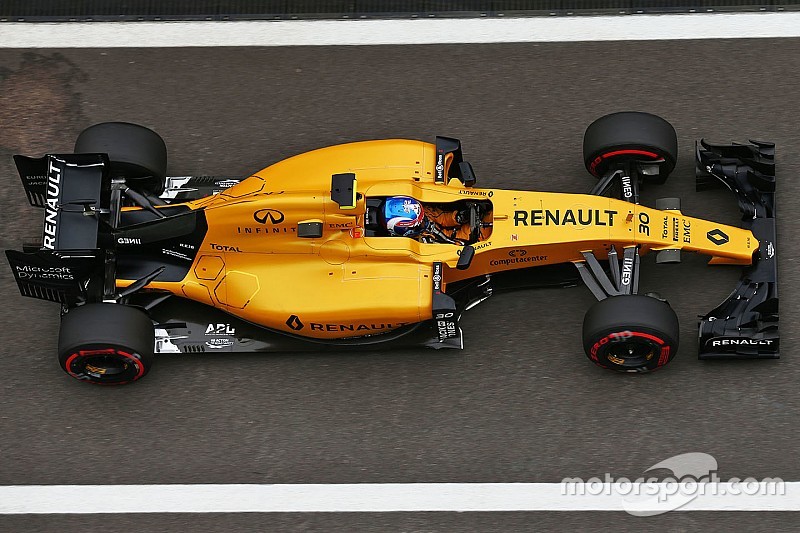 Renault's Jolyon Palmer believes an overnight change on his Renault RS16's floor has finally solved the car issues that have plagued his car on the recent weeks.

After a very anonymous race in China, Palmer was at a loss for his lack of pace during Friday practice in Sochi as he significantly trailed both newcomer Sergey Sirotkin and regular teammate Kevin Magnussen.

However, with a new floor installed on his car on Saturday, the Briton managed to qualify within a tenth of his Danish teammate.

"Finally, I can drive the car again, [it] feels normal," Palmer said. "In FP3, immediately, I pushed and there wasn't anything strange - and qualy, 18th is not exactly fantastic but at least it was actually enjoyable to drive."

Asked what the problem was with the old floor, the Briton responded: "It wasn't working as we'd hoped. We couldn't really see it clearly on the numbers, but something clearly hasn't been working well - yesterday was very bad, China was very bad and we didn't understand it.

"I was struggling with snappiness in the rear. The last couple of weekends, I've had this snappy oversteer as I went in - but now it's back to how it felt before."

According to Palmer, this was the second floor change on his car during the season, the first one having followed right after a strong F1 debut for the Briton in Melbourne.

He continued: "It feels like [the answer]. I could be wrong, but it feels like Melbourne, [when] it was consistent to drive. It wasn't doing anything strange - we're not super quick as a team but at least I'm having the same feedback as Kev now. We're lapping within a tenth. It's normal."

Palmer reckoned his recent pace struggles were especially harsh on him as a rookie, as he suggested F1 wasn't too easy on newcomers.

"Formula 1 is quite a tough world when things are not going well," the Briton said.

"It's harder when you're a rookie and things are not going well.

"I'm a GP2 champion but there's plenty of people who can question me when I come last in a grand prix or... get outqualified by nine tenths by my teammate.

"I think people are quite quick to criticise, because all the sessions are covered and the analysis people do now is huge.

"It's not easy but I just kept faith in myself because I realised I'm not happy with the car and we can sort it - and finally I feel like we have."

An outside shot at points in Russia

Renault is yet to score any points in its return campaign as a manufacturer team in Formula 1 - but Palmer believes the expected one-stop nature of the Sochi race could give it a fighting chance.

"I think on Sunday we'll be moving forward, moving away from the Saubers and the Manors.

"And also last year there was a couple of safety cars, it's a one-stop race, so if you can get a break with the safety car strategy, you can end up in a position to score points. Seems a long way away now, but I think we can move forward anyway."

Bittersweet afternoon for the Silver Arrows in Sochi