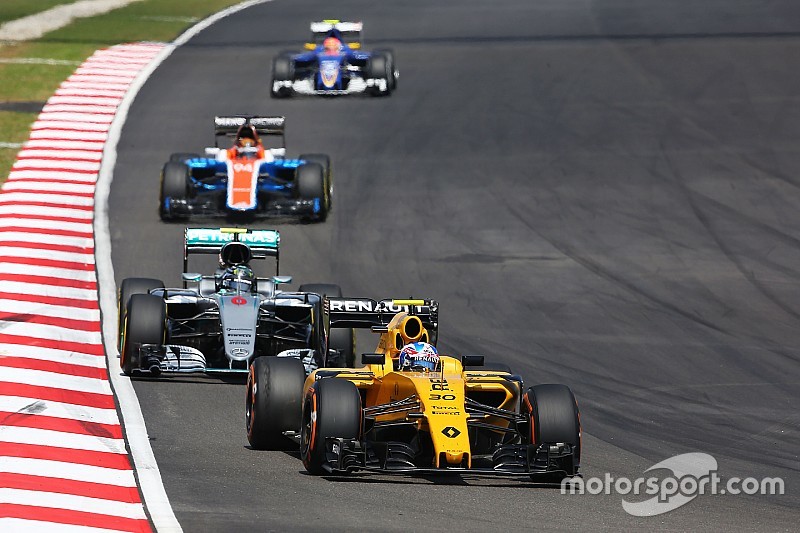 Jolyon Palmer says he is “ecstatic” to have finally scored his first Formula 1 point by finishing 10th in Malaysia, putting a season of frustration behind him.

The Renault driver started 19th after what he had described as a "depressing" performance in qualifying, and pulled off a one-stop strategy, using the hard and then soft tyres.

He managed to fend off Carlos Sainz's Toro Rosso in the closing stages to grab the final point on offer - marking only the third time Renault has scored points all season.

"I'm ecstatic, very happy," said Palmer. "It was such a long race, pushing really hard the whole way, but keeping the tyres alive, which was the key.

"We did a good strategy, the balance was nice, and everything came together.

"The other thing was the Virtual Safety Car, there were a few of them, and you have to make sure you keep the tyres in a good position, not letting them get cold, and getting ready to push again.

"And that was it really, the prize of a point was focussing my mind.

"Ten or 15 laps from the end with Carlos [Sainz] right behind, I just kept consistent, kept a good pace, and brought it home."

Palmer admitted there was an element of luck involved in scoring his point, as he had been running in 11th at the time of Lewis Hamilton's engine failure.

"We got a slice of luck with the Mercedes dropping out," added the Briton. "Before it hasn't been going our way, but this time it did, and I took advantage."

Kevin Magnussen, meanwhile, retired the sister Renault due to overheating brakes, having already dropped to the rear of the field after making contact with Esteban Gutierrez at the first corner.

Tech analysis: How rivals took Toro Rosso's concept to the next level