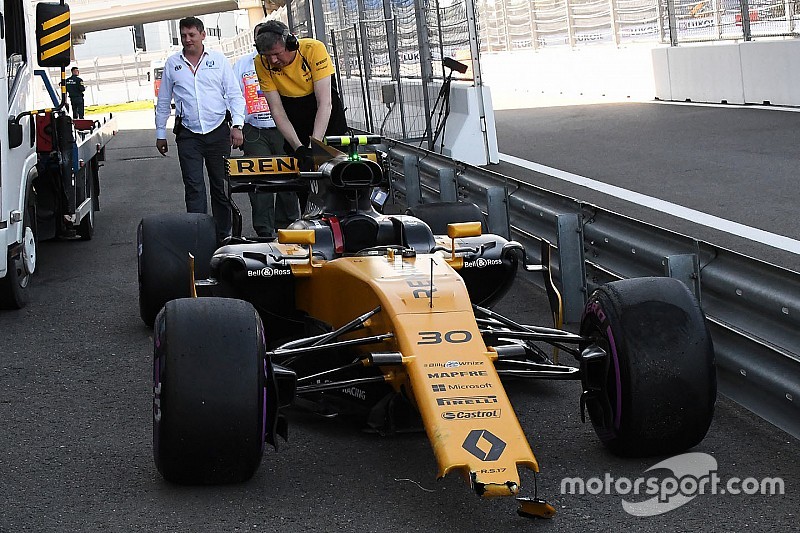 Jolyon Palmer owned up to making a mistake under pressure as he crashed out of Q1 at the Russian Grand Prix, on a weekend blighted by mechanical problems.

The Renault driver has endured a run of issues through the Sochi weekend – with a hot exhaust damaging his car on Friday, his new chassis stopping with an engine failure on Saturday morning and then the shunt in qualifying leaving him 16th fastest.

The Briton had a new engine fitted for qualifying.

"Obviously losing track time this morning is not ideal," explained Palmer, when asked by Motorsport.com about what had happened.

"Qualifying was actually going okay. I was quite happy with the car and then, on the second set of tyres, I had a massive snap on the first lap and I didn't improve.

"So I was down to one lap. And then, under pressure, I just committed hard and took a little bit of kerb, which wasn't ideal."

Although he had had a far from smooth weekend of running so far, and earlier races have been hit by incidents and mechanical problems, he felt that it would be wrong to vent any frustrations at Renault for what was happening.

"No, because I also put it in the wall, so it's quite difficult for me to point too many fingers at the team," he said.

"It's a shame because I think it's a similar case to Melbourne where I lost a lot of track time and then you try to make up for it.

"Probably if I'd dialled it a lot better in P3 then I think we had the pace to be through Q1 quite comfortably. So when you haven't done many laps today, then it becomes a little bit more on the limit and you have to dig deep and explore new limits.

"So, for me, losing the track time certainly contributed. And obviously it's my mistake and it's a simple one, just hitting the kerb on the lap."

Palmer knows that there will be few strategy options to help him make good progress up the order in the race on Sunday, but felt a first lap charge like he pulled off last year could be key to helping him on his way.

"One stop, for sure," he said. "The special tactic is just to get a good start. It's a long run down to turn two.

"Last year Kev qualified 18th and at the end of lap one I was 10th, so if we can do that again there's a chance of points. Starting from 16th, it's possible.

"I think, last year I finished seventh in the race and only started 16th or whatever, so it's the sort of race where anything can happen. Especially at the start."

Red Bull not surprised by gulf to pole time in Sochi