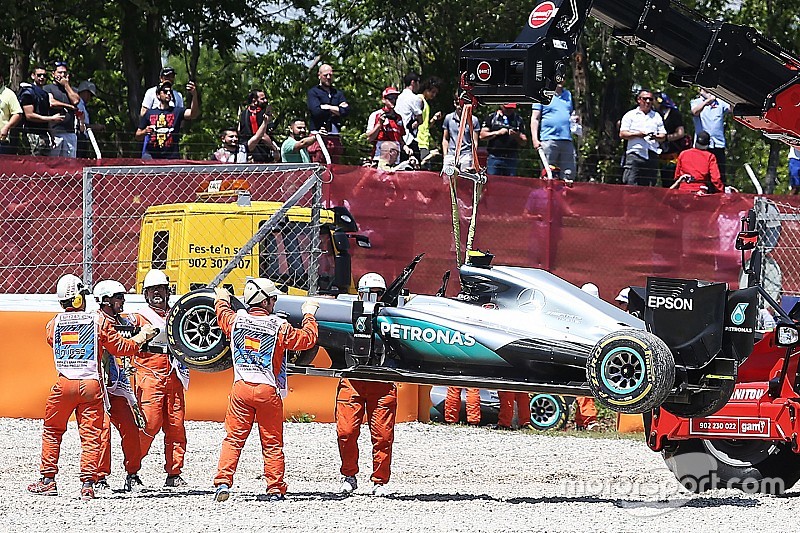 Juan Pablo Montoya has laid the blame for the collision that eliminated both Mercedes drivers from the Spanish Grand Prix on Lewis Hamilton, who the Colombian thinks was too “optimistic” trying to pass Nico Rosberg.

The clash at Turn 4, which resulted in both Hamilton and Rosberg being eliminated on the spot and paved the way for Max Verstappen to take a sensational maiden win, was deemed to be a racing incident by the stewards.

However, former Williams and McLaren F1 star Montoya thinks that Hamilton should have foreseen Rosberg’s move across the track to defend his position.

“Hamilton was really optimistic to be honest,” Montoya told Motorsport.com when asked for his opinion on the incident. “Was he expecting he was gonna get some room?

“After you pull a pass like that the start, there is no way – even if he was in the wrong position – that Rosberg was going to give him an inch.

“You have to see it coming. Being a teammate they should perhaps have been a little fairer [in battle], but from a pure racing perspective… really?”

Asked for his thoughts on the Haas F1 team’s start to the season, Montoya said he was puzzled by the American outfit’s subdued form since Romain Grosjean’s points-scoring finishes in Australia and Bahrain.

“They’ve surprised me how fast they were [in the first two races],” said the Penske IndyCar driver. “Then they surprised me like, ‘what happened? Where did they go?’

“They had it, they made everybody look like a fool, and then a lot of the speed went away.

“I don’t know, it’s weird – in the first two races, they were unbelievable.”

Top-five in NASCAR possible for Grosjean

Grosjean has expressed a desire to try his hand at NASCAR – potentially at Sonoma during the F1 summer break – and former Cup driver Montoya says a top-five finish would be an attainable result for the Frenchman.

“Take your time with the car, because they are so slow on a road course,” said Montoya when asked what advice he would have for Grosjean on his NASCAR debut.

“People think that doing a road course with a Cup car would make you feel really good – but 80 percent of the corners are in first gear, and you’re going so slow.

Aleshin “not pleased” by Kvyat demotion

F1 drivers asked to keep tear-offs to a minimum