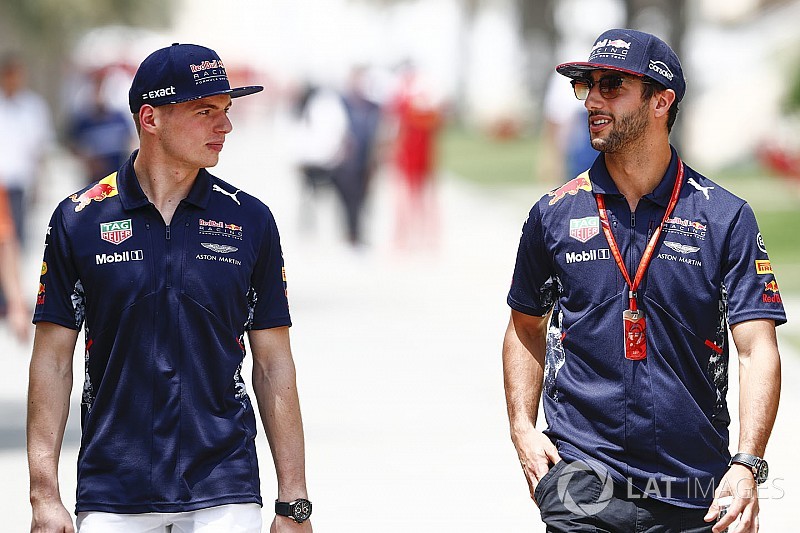 Daniel Ricciardo might have brought Red Bull its first Formula 1 win of 2017 in Azerbaijan, but that doesn't change the fact that Max Verstappen has been the outfit's stronger driver this year, argues Valentin Khorounzhiy.

Red Bull Racing's 2016 campaign took a bit to kick on, but come the fifth race the team finally had its first victory. Max Verstappen was the author, putting on a stellar drive after a controversial collision between the two leaders put him in position to benefit.

Despite the Austrian team's triumph, the outfit's other driver Daniel Ricciardo cut a rather dejected figure then, as a three-stop strategy left him off the podium just a day after he'd handily outqualified Verstappen.

Fast-forward a year and a bit. Red Bull Racing's 2017 campaign takes even longer to kick on, the team waiting until the eighth grand prix before its first win. Ricciardo gets it this time, his triumph made possible by a stellar drive and a controversial collision between two leaders (also a loose headrest).

His teammate Verstappen cuts a dejected figure, deciding against speaking to media in the immediate aftermath of the race and telling Dutch TV afterwards: “I was disappointed. If you look at the positions, then you can easily imagine [winning the races] yourself.”

All of this is not to draw some all-too-convenient parallel between Barcelona 2016 and Baku 2017, which are two races that really didn't have all that much in common apart from a couple of surface details.

Rather, this is to illustrate how the team dynamic at Red Bull has changed. All throughout last year, Ricciardo more than had the measure of his teammate and ended the campaign with a rather convincing qualifying head-to-head score, even as the Dutchman courted all the headlines with equal parts controversy and brilliance.

Yet – and this admittedly feels a bizarre point to be making amid a four-podium streak for Ricciardo, F1's most recent race winner – the balance of power has shifted.

Verstappen, through a combination of factors among which reliability is key, doesn't even have half the points of the Aussie, but most other metrics suggest it is he who has been the quicker Red Bull driver this year. 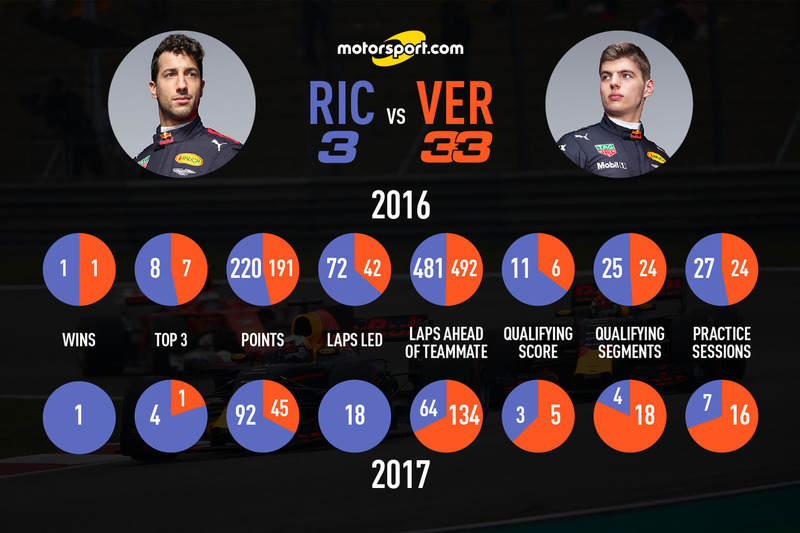 Head to head, Ricciardo vs Verstappen

Points are, of course, the one metric in F1 that matters above all the other ones, but any suggestion that they are the ultimate reflection of performance should be waved away.

Ask, for instance, the Daniel Ricciardo of 2015, who finished behind teammate Daniil Kvyat in the standings in a year where the Aussie lost a fair chunk of points to luck and unreliability. Kvyat is no slouch, of course, but it would be seriously bold to suggest he was the quicker Red Bull in '15.

Ironically enough, Verstappen really seems to have kicked on since Russia in particular – the last race that he'd been ahead of Ricciardo in the standings. He was trailing 1-3 in head-to-head qualifying at that moment, and now he's 5-3 ahead.

“What you'll see with Max is there's a big result just around the corner. The way he's driving at the moment, he's really stepped it up a gear,” was team boss Christian Horner's assessment after Baku.

“He's had a run of bad luck, that will turn. It always does. And I'm confident that will turn soon. I think you'll see, there's a big result not too far away for him.”

That Horner said Verstappen was “massively impressive” in Baku and would've “no doubt” won the race is telling. It is, of course, man management as Red Bull should probably be a little worried about the Dutchman's spirits - but the data makes it obvious Horner's words are not empty praise. 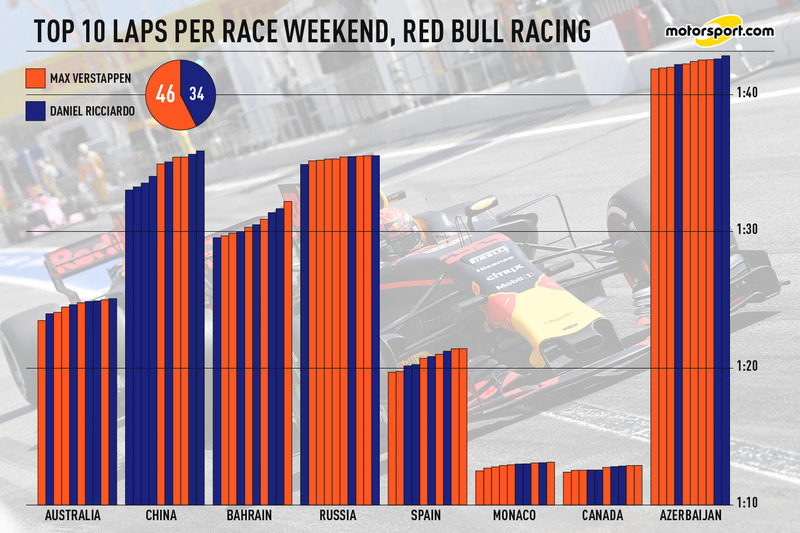 Ricciardo's star-making 2014 campaign and status-confirming 2016 campaign have cemented him not only as a wonderfully bold overtaker and an extremely consistent performer, but also as a driver who saves his best flying lap Q3.

Arguably there's no greater example of that than that very weekend of Spain 2016, where Verstappen looked every bit the match for the Aussie on his RBR debut, only to drop four tenths in the final segment as Ricciardo produced a moment of magic.

Not counting the China qualifying where Verstappen had a car problem, there were two one-lap head-to-heads where Ricciardo beat the Dutchman in 2017 – Bahrain and Russia. On both occasions Verstappen had been quicker in Q1 and Q2.

Since Russia, Verstappen has finished ahead of his teammate in all 12 qualifying segments, and all but two of the 12 practice sessions. Many of these results won't have been representative, sure, and there have been significant mitigating circumstances for Ricciardo, such as a Q3 traffic mishap in Monaco and an FP2 problem that complicated his Canada weekend – but the picture as a whole is not to be dismissed.

From that data, Q3 in Spain makes for a particularly stark contrast – having lost by four tenths against Ricciardo the year before, Verstappen was almost five tenths clear this time around, with no obvious explanation besides the Dutchman just being quicker.

You could argue, of course, that Ricciardo has been stronger in race trim, as his four straight podium finishes are clearly an indication he's doing something right. But it's really hard to gauge one way or another how he's stacked up to Verstappen in grand prix running, given Red Bull's reliability woes.

Verstappen's had the lion's share of those but not all of them, with Ricciardo's Melbourne race undone by recurring electrical issues. The Aussie was noticeably slower than Verstappen in the race, but he was also two laps down, running among midfielders, so it's a little difficult to read into that.

In China, Verstappen was markedly the quicker Red Bull on a drying track (his advantage somewhat undersold by a late-stint error), but Ricciardo clearly had the edge in the final laps, hassling his teammate for a podium spot.

Bahrain was inconclusive, as both ran within the five-car Valtteri Bottas-led lead train before Verstappen's brake failure. And Monaco was, really, no different, with Ricciardo's better late-race pace likely a consequence of clean-air running while Verstappen was stuck behind Bottas.

In the most recent race where they could be at all compared – Canada - Verstappen clearly did have the better race pace on ultrasofts, managing to run comfortably between the two Mercedes cars as Ricciardo was dropping off.

Of course, whatever difference there is between the pair is not down to pace alone. For instance, in that very same race Verstappen was also “lucky” - according to Sebastian Vettel – to escape a puncture after opening-lap contact with the German's front wing.

The Dutchman does seem to be the more aggressive of the two in the opening laps, which sometimes pays off (like in Canada) and sometimes doesn't (like in Spain, where he made it a three-wide move on the outside of Turn 1 and was taken out). 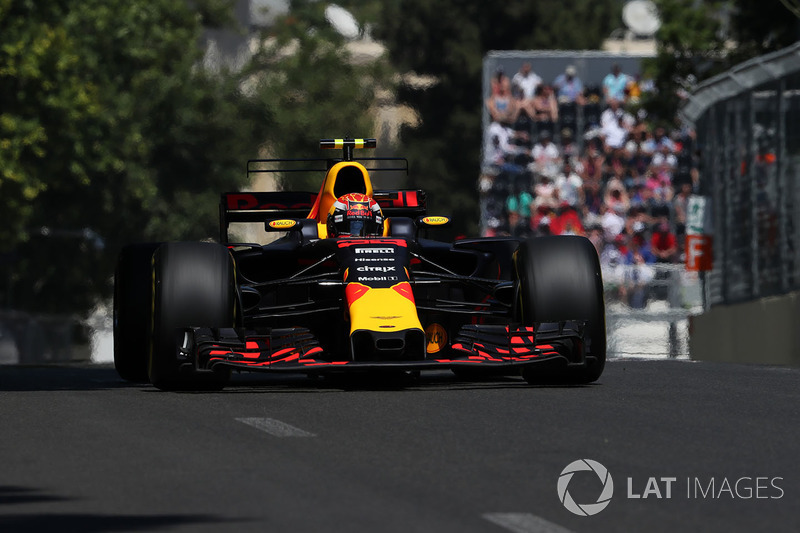 Verstappen's current form, and the fact that he's not been getting the points that his speed has warranted, will likely make for interesting implications all around the Red Bull camp.

The team itself has every reason to hold its head high, having seemingly turned around a truly difficult start to the season with a fantastic run on one side of the garage, helped by it having exceeded expectations at low-downforce venues Montreal and Baku.

At the same time, Verstappen will be keenly aware that he could've had around 100 points by now – which, truth be told, wouldn't be that far off of the increasingly volatile Lewis Hamilton / Sebastian Vettel title battle - if the three mechanical failures hadn't occurred.

Going by his assessment of the season as “completely crap” and his public voicing of concerns over engine supplier Renault's prospects for 2018, Verstappen's morale is probably not at an all-time high, which should be a worry for his employer. He's signed through next year, but we can only speculate how airtight that deal is – and going by his continuous progress, Red Bull should probably be thinking a bit longer-term at the moment.

But what of Ricciardo? This is a driver whose reputation within F1 is much better than his five grand prix wins suggest, and one who's not had all that much trouble with teammates at RBR – overshadowing four-time champion Vettel, the team's favourite son, in 2014 and then clearly contributing to Kvyat's demotion with his imperious 2016 form.

The subsequent arrival of the Dutch wonderkid did not seem to faze him much at all, but – despite the Baku win and despite the other podiums – the trend seems to be going the other way as far as pure pace is concerned.

Verstappen's progress should leave Ricciardo somewhat worried, given that, unless some contracts are ended early, they have another season and the half together at the very least.

As it stands, however, Verstappen's new-found advantage is far from conclusive. And Red Bull's upcoming home race would be as good a time as any for Ricciardo to re-assert himself in the intra-team battle. 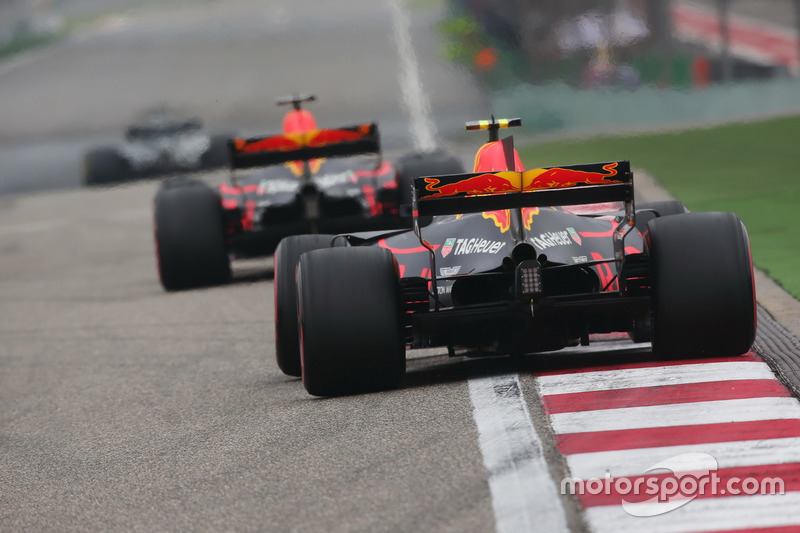