Opinion: If Vettel is right, who can save 'lost' F1? 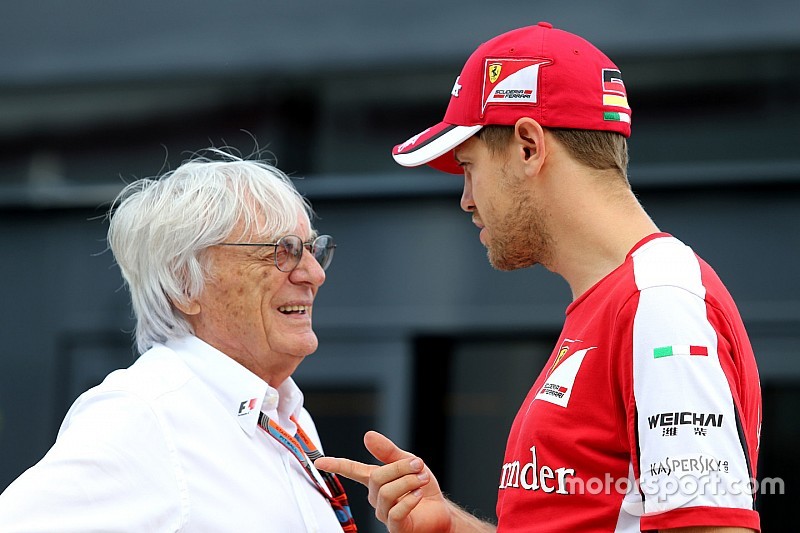 Can we trust the future of F1 with the current decision-makers, or do we need to turn to someone new? Charles Bradley says hark to the past to move forwards.

When it comes to Formula 1 drivers with perspective, Sebastian Vettel has a wider view than most. He's very aware of racing history, and certainly his own eminent position within it.

Which is why we should take heed when he says that F1 is "too complex" and "we have to be careful not to lose the roots of motor racing".

I quite agree with him when he says the spotlight of the sport should be on which driver is quickest. After all, who looks at the constructors' championship before the drivers' points – apart from the team bosses and their accountants?

That said, motor racing at the pinnacle isn't just about the drivers, or even drivers plus teams with equal cars, or we'd all be fixated on single-make series like GP2 and GP3. It's about drivers, teams and cars. Man (or woman), brains and machine.

Is F1 a broken product, a busted flush, a lost cause? I don't think so, a lot of that is down to a negative perception, but…

That's a cry I hear regularly from F1 fans, and it's important we should listen to them. So why do they feel disillusioned?

I can't speak for all, but my personal beef with the direction that F1 has taken is twofold: high-degradation tyres and DRS. I will readily admit that both of those have served a purpose in making the on-track action – specifically overtaking – more prevalent. But they succeeded in doing that with a veneer that served a purpose for its time, but has since worn away.

With DRS, what we've been left with is unsatisfying, straight-line passing, or as I like to call it "Coldplay overtaking". Hardly rock and roll: it's passing, sure, but feels soulless and mainstream somehow.

We don't rave about a DRS move in the same way we would a Max Verstappen or Daniel Ricciardo lunge under brakes, do we?

And teams certainly seem to have got their heads around high-deg tyres. As a method for artificial unpredictability, I think they've had their day.

And why have artifice for its own sake in a sport that's meant to be pure?

Finding the right blend of racing

I think what Vettel's getting at, and it comes down to his "we have to be careful not to lose the roots" comment, is that F1 needs the right kind of racing.

It mustn't be solely the engine or aero or tyre usage that decides which driver wins, but a better blend of these factors – giving off a 'may the best driver/team/car on any given day win' vibe.

At the moment, we only seem to truly get this when weather conditions are mixed, or there's been a lack of practice running.

It's not only the right kind of racing, but the fans also crave a return to engineering ingenuity. That isn't a lost art, but a consequence of ever-tighter regulations.

A renowned engineer once told me of his metaphorical space to manoeuvre: "Back in the day, the room we were allowed to operate in was like those big containers you see on ocean ships; these days we're forced to work in shoeboxes."

But how to mix all those variables to a satisfactory outcome? First of all you need to know exactly what you're trying to achieve.

If this were a pair of shoes, a range of sofas or even a feature-film ending you'd have market researchers organizing focus groups to find some common consensus.

A panel of experts would gauge the reaction – positive and negative – and come up with an action plan of how to improve it. What worked, what stunk it up?

In fact, we know what the sport's consumers think, the GPDA's huge fan survey told us that. What we actually need now is for someone to listen to them and take some action.

And that's the hardest part (drat, a Coldplay earworm).

Who should we turn to for expertise?

One thing is for sure, we can't allow any strategy working group made up of current team members decide what's best for the sport any longer. We're repeating the same mistakes.

They will just argue amongst themselves until the loudest voice gets their way, and that's just not what we want right now.

So whom do we need?

1) We need someone whose credentials are impeccable.

3) We need somebody who's run a team on both a shoestring and a manufacturer budget.

4) We need someone who's been out of the limelight for some time, long enough for their perceived old ties to lapse.

5) We need somebody with the vision to set out a new stall; one that harks back to a glorious past but promises a new future.

And it's Vettel's old mate and team boss Christian Horner who hit the nail on the head last year: we need Ross Brawn. A man who's won 16 F1 world titles with three different teams (Benetton, Ferrari and Brawn), and was the architect with a fourth (Mercedes).

And if we must have a committee, and perhaps we should with Brawn at the helm, then let's have bright sparks like veteran technical chiefs Patrick Head, John Barnard and Gordon Murray on it too. Been there, seen it, retired on their proceeds from the sport.

We need razor-sharp brains that understand the sport, that comprehend its true essence and have displayed visionary thinking to get the engineering fundamentals right.

After all, if we are going to have the seismic F1 shift of closed or 'Halo' cockpits (and that's not if but when) then we've got to counter that with something to keep the core fanbase on board.

We can't afford to risk turning off any more of the sport's followers unless there's the promise of racing that will get them excited again.