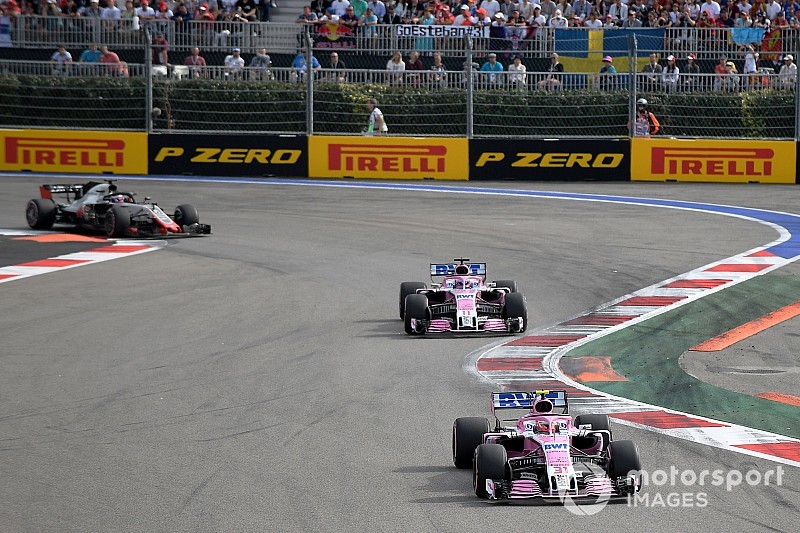 Esteban Ocon believes Force India needs to review the way it approached Formula 1’s Russian Grand Prix, after a decision to swap its cars around failed to gain it any places.

Ocon and teammate Sergio Perez were stuck behind the Haas of Kevin Magnussen when Perez asked to be let through to attack the Dane, with Force India giving Ocon a set number of laps to make a pass before he had to move over.

The Frenchman couldn't make the overtake and allowed Perez ahead, but the latter could make no progress either - so eventually the cars swapped back, coming home ninth and 10th to both pick up points.

“Ninth is third for us, so it’s not too bad, but it’s not the best,” said Ocon, referencing that the midfield cars are in their own race so he effectively claimed an unofficial ‘class B’ podium.

“We tried to swap to see if someone could get the car in front, but we probably have to review this because I don’t think it worked that time.”

Both drivers accepted that there was little else the team could have done to improve its result, finishing behind Magnussen and the ‘class B’ winning Sauber of Charles Leclerc.

“We have to review [the tactics], but I think it would have been very tough for both of us,” said Ocon.

“I understand the team’s point, and to be able to try, but it didn’t work out, so let’s see what we can do better.

“When Sergio was behind he wasn’t close to me, and when I was behind it was the opposite, I couldn’t get close as well. The race was fixed from there.”

Perez added: “It was a day where we had to follow each other.

“The team tried to maximise the day, they gave me the chance to push onto Magnussen, because at the time we thought that I was a bit quicker, which didn’t happen.

“Fair enough, Esteban got the position, it was just what we could do today.

“The Sauber [Leclerc] came from nowhere and beat us massively. They have done an incredible job.

“I just saw him on the first lap and then he disappeared. Massive surprise.”

Verstappen called off race charge to save engine