Esteban Ocon says his Alpine Formula 1 team is going in the right direction with its latest upgrade package, but cautioned that it still has to “bring more stuff”.

The A522 upgrade package looked promising on Friday in Barcelona but the team had a troubled qualifying session, with Ocon earning only 12th and Fernando Alonso down in 17th after a radio miscommunication compromised his final run in Q1.

In the race, Ocon put in an impressive charge to seventh, while Alonso started last after banking a fresh power unit and yet still managed to climb through the field to ninth.

Ocon was pleased with the progress that the team made over the course of the weekend with the upgrades.

"I am confident that we are going in the right direction with any upgrades that we put on the car, it seems to be working,” he said when asked by Motorsport.com. “We know that the other teams are also progressing, and that's what we need to keep an eye on.

“But we definitely need to bring more stuff, because P7 is good, but we're not where we want to be. And we need to push harder to catch on the Alfas which are in front of us, and the other ones.

“We think there's a lot for us to review this weekend. We had very good talks with the team, with Fernando, very good debates.

“And we have quite a few directions that we are quite clear on, and that the team and us need to identify exactly, because it's tricky at the moment with this new car to understand everything. But today feels like a victory." 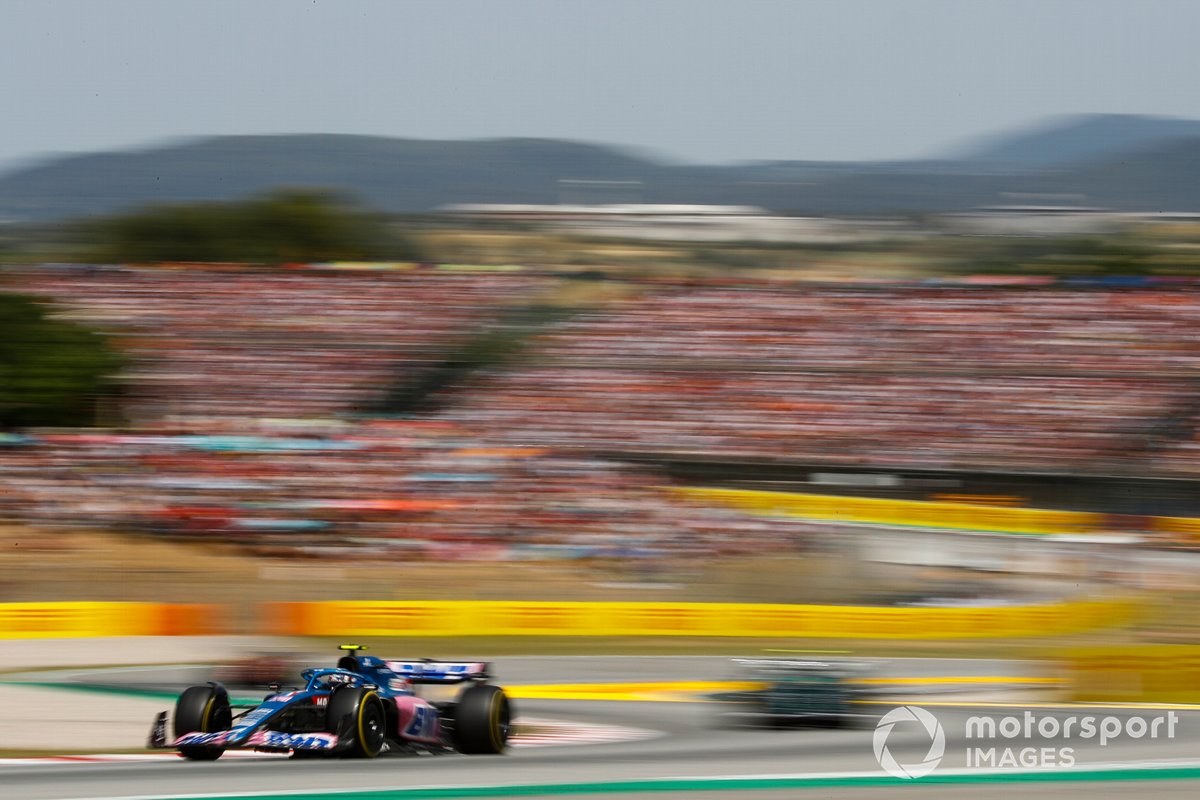 Regarding the value of the data gathered in the race he added: “We completed everything, basically. And there was a difference between the strategies as well, because Fernando had new tyres in the end. So we can also compare that. It's all good stuff."

Ocon noted after qualifying in Spain that he expected to have a better race car on Sunday, and that proved to be the case.

"It was, so that's very good,” he said. “I'm very pleased with today's result. I think to get both cars back in the points from where we started was a bit unexpected, but the rhythm in the first stint was fantastic.

“I overtook two or three cars from the first lap to the first pitstop, and there was nothing else that we could have done better, because Valtteri [Bottas] had too much speed.

“And from there we were fighting with Lando [Norris], who was quite a lot behind, but he was fast as well. So I'm very pleased, and a double points finish for the team. They deserve it.”

Ocon admitted that he was surprised to be able to make such good progress in the first stint, as others seemed to struggle more with their soft tyres.

“I was not expecting that. Usually they're all looking after the tyres and stuff. And I was like on the first lap, I'm going to take it easy, because maybe that's what they are doing, and they are going to have more rhythm after that.

“But they still didn't have, they were sliding quite a lot. So I thought, Okay, let's go. And we made easy moves. And then I thought, let's try on Valtteri. But Valtteri had too much pace.”