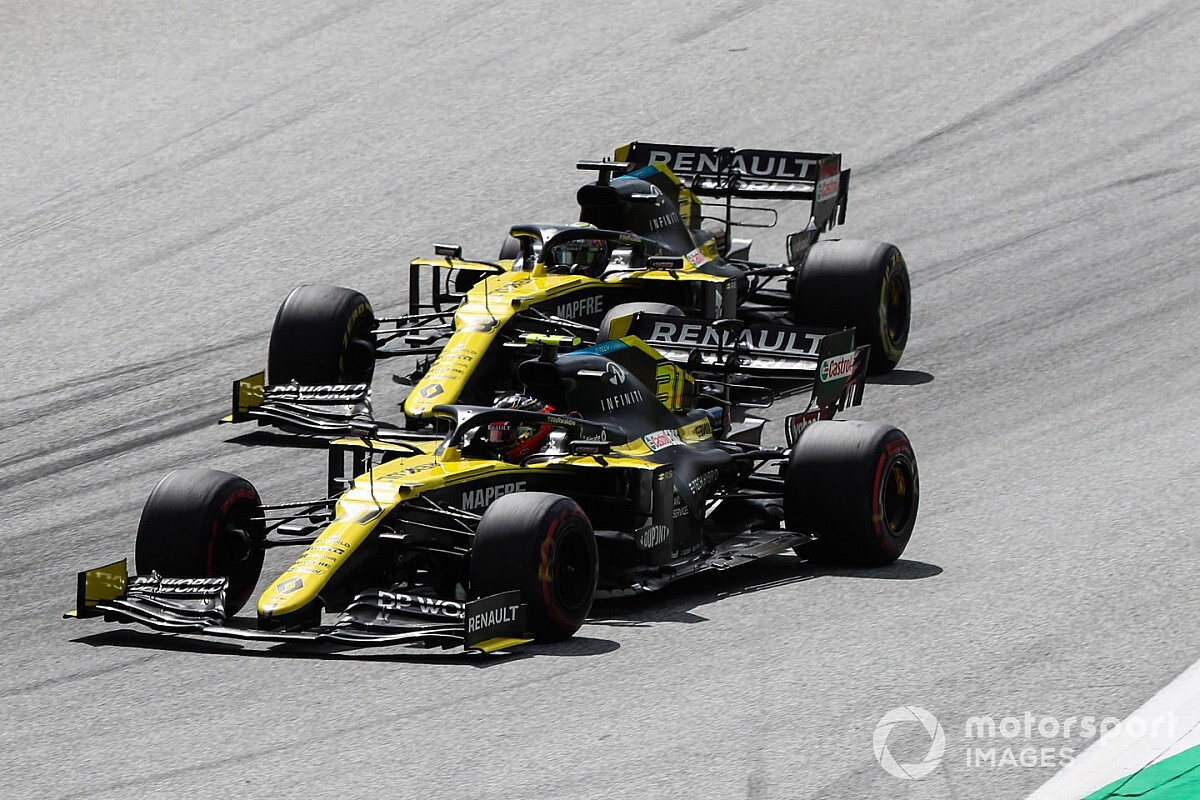 Daniel Ricciardo believes that his Renault Formula 1 team would have asked teammate Esteban Ocon to let him by in the Styrian GP, had the Australian not managed to pull off an overtaking move.

Ricciardo was the highest-placed driver on the grid to start on the medium tyres last weekend, and he soon came up behind Ocon, whose softs were past their best.

After several laps behind his teammate, he was heard telling his engineer that he was faster than the cars ahead, but no attempt was made to ask the Renault drivers to swap, and Ricciardo eventually had to make his own move.

"I asked a bit of a general question," said Ricciardo. "As I was, I felt, being held up by by that group. So I just said, 'Look, guys, I'm quite a bit quicker at the moment.' So I guess that's, it's really me asking the question. 'Okay, are we going to swap?'

"Obviously, we were on different strategies. I was on the medium and Esteban was on the soft, so I think typically early in the race I don't think it's that wise to fight and lose time, especially on on a split strategy.

"So I asked the question, and then I got past, but I believe the call was coming. If it wasn't that lap, it was going to come. So it was being discussed on pit wall. I think obviously they could see we were both losing time trying to fight each other. So it was certainly being addressed."

Ricciardo and Ocon had not previously fought on track as teammates.

"It's the first time we've gone I guess wheel to wheel," Ricciardo added. "Obviously I was obviously never gonna do anything too crazy, especially that early in the race, and I think because we were on different strategies.

"So if I didn't get by in that lap, I honestly was expecting to get a call to swap cars. I think I would have been a little bit surprised if I hadn't got that, but it was leaning that way anyways.

"I was obviously, especially after [retiring] last week and just wanting to try and get a race on board. I wasn't too interested in throwing any dive bombs too early in the race on on a teammate."

Ocon, who famously had several incidents with his former teammate Sergio Perez at Racing Point, said he enjoyed the fight.

"It's been good to race with Daniel," he said when asked by Motorsport.com. "I have to say, it was a very fair fight. We left other space. It was not too aggressive. And that's that's the way I want to race against I guess my teammate, really.

"So yeah, it was a good fight. I was happy with how everything has been there. So looking forward to many more. I think the policy of the team so far was to let each other race but race cleanly. And that's what we did."