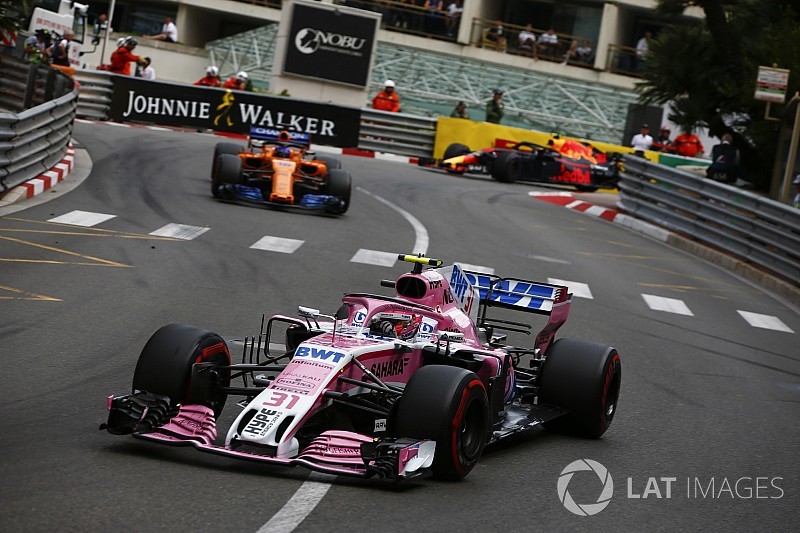 Esteban Ocon had to overcome a brake-by-wire failure in the closing laps of the Monaco Grand Prix as he held off Pierre Gasly, Nico Hulkenberg and Max Verstappen to secure sixth place.

Ocon crossed the line just 0.6s clear of countryman Gasly, and only 23 seconds behind winner Daniel Ricciardo at the finish.

That earned Force India best of the rest honours behind the drivers from the top three teams for the second time this season, following Sergio Perez's third place in Baku.

"How he managed to drive it was remarkable, a great effort from him.

"From our side we were only looking for mistakes and reliability issues to move up, and there weren't any, so we are where we are.

"But it was a great result for Esteban, especially with the braking problems he had in the last couple of laps.

"He's had a couple of difficult races, so it's nice to come back with a good one.

"It was just disappointing that we didn't get them both in the points, which is what we would have liked. Overall a very good result."

Ocon's teammate Sergio Perez failed to make the points after an issue with the right rear wheel at his pitstop, and he came home 12th after running ninth before the stops.

Fernley said: "We had an unfortunate pitstop with Checo, and that just set him back.

"The nose on the hub gave a problem, so the wheel doesn't go on properly."

Ocon's result moved Force India up to sixth in the constructors' championship, at the expense of Haas, which came away from Monaco without any points after a difficult weekend where it struggled for pace.