Ocon: I needed one more metre to lead race 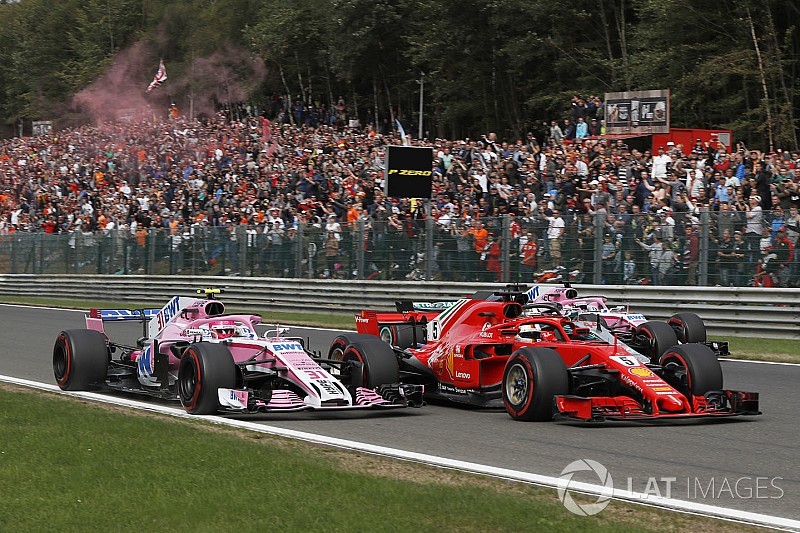 Esteban Ocon believes he was one metre away from putting Racing Point Force India into the lead of its first Formula 1 race at the Belgian Grand Prix.

On the weekend that the renamed and rescued team started its new era, Ocon and teammate Sergio Perez grabbed the second row of the Spa grid and ended up four-abreast with Sebastian Vettel and Lewis Hamilton in a lead battle on the opening lap.

As Vettel got a run on poleman Hamilton for the lead on the Kemmel Straight, Ocon drew alongside both on the inside approaching Les Combes.

The Force India driver ultimately had to back out and was passed around the outside by Perez as he did so.

"I had a good start, got on the inside at Turn 1 [La Source], next to Seb," Ocon told Sky Sports F1. "He had better traction then. Maybe I was a bit overconfident there.

"With taking the lead, I don't know, we'll never know. I had a good run down though, a good slipstream. I was lacking a metre, probably,

"I will review what I could have done differently. But it was good and fair racing. Good fun.

"We were not going to all fit there. I braked early just to be safe and Sergio had the perfect spot."

Perez and Ocon were ultimately pushed down to fifth and sixth by Max Verstappen's Red Bull and Valtteri Bottas's Mercedes.

"You see them really close and you kind of think that you might you have a chance," said Perez of fighting the faster cars.

"But realistically you are thinking about where your race is so it doesn't really matter what they do, but it's important to position well with them."

Ocon added that the final result was "where the car's pace was, definitely".

Having to start from scratch as a new entry in the championship meant Force India - which had been sixth in the constructors' standings before Spa - lost all its points from 2018 so far.

But the double top-six finish in Belgium means it has already passed Williams in the constructors' championship and is within one point of eighth-placed Sauber.

"It is definitely a great start, especially after all the trouble that we had in the last couple of months," said Perez.

"A really fresh start for the team and I want everyone involved in the past team to feel very proud of what we have achieved today.

"I think there are great things coming for this team."