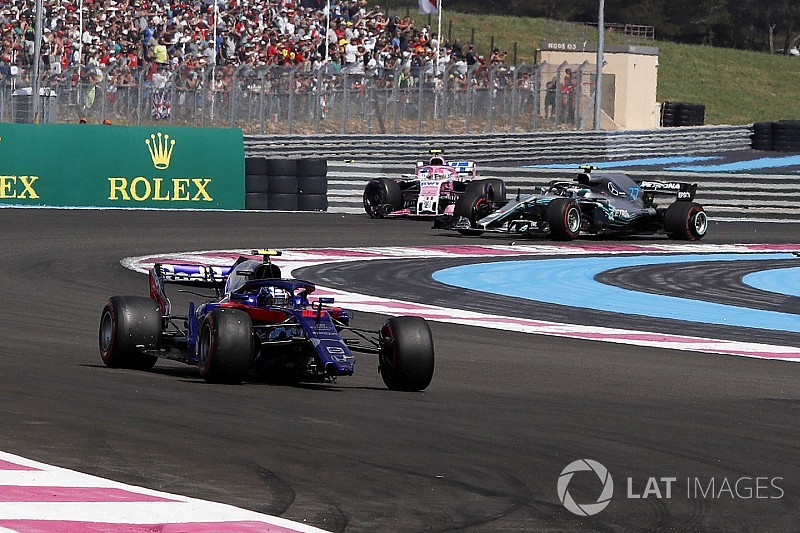 Esteban Ocon and Pierre Gasly have both been reprimanded for their accident on the opening lap of Formula 1's French Grand Prix.

Toro Rosso driver Gasly looked to challenge down the inside of Ocon at the Turn 3 right-hander but lost the car under braking when the Force India driver darted to the right.

Sideways on corner entry, Gasly hit the right rear of Ocon's VJM11, both cars retiring after the incident.

Both Gasly and Ocon were summoned to the stewards in the aftermath and were subsequently handed their first respective reprimands of the season.

"The driver of car 31 was optimistic in his move from the left of the track across to the apex of the corner.

"The driver of car 10 was also overly optimistic in his late braking into the corner.

"The Stewards are of the view that both drivers made errors which contributed to the collision."

Speaking after the race, Gasly suggested his compatriot didn't notice him going for the overtake at Turn 3.

"He came completely from the left, he didn’t see me, and he came across the track to take the apex. I didn’t have anywhere to go so I couldn’t avoid a collision.

"I saw that he hadn’t seen me and he was going to cross completely to the inside, so I tried to brake even more - I could see already what was going to happen.

"I tried to cut as much on the inside as possible but I couldn’t disappear."

Ocon, meanwhile, reckoned that the hit from Gasly was not the decisive moment in his short race, as his car had already been damaged in a clash with Romain Grosjean on the run down to Turn 1.

Haas driver Grosjean squeezed Ocon to the left side of the track, and was assessed a five-second time penalty and two penalty points on his license for making "a sudden and significant move to the left" that led to the collision.

"I took a good start, I was alongside Romain, I had one wheel already over the white line so I was already on the edge of the track," Ocon recalled.

"There was nothing, nobody on the [other] side of Romain and I got a massive hit, so from that I think I would've retired already, the hit was so big that all my side and probably the radiator were damaged.

"And after that, Pierre lost it on the brake and hit me from the back."