Ocon “one degree” away from having same F1 crash as Schumacher

Alpine’s Esteban Ocon says he nearly had an identical crash to Mick Schumacher's in qualifying for the Formula 1 Saudi Grand Prix, saying he was one degree of slip angle away from going into the same wall.

In Q2 on Saturday Schumacher suffered a massive accident on the exit of Turn 10 after going over the kerbs and losing control over his car.

Schumacher then veered into the inside concrete wall at high speed, which destroyed his Haas, but he was fortunate to escape the dramatic wreck without injuries.

Later in Q3, after a lengthy clean-up and Schumacher taken to the medical centre and then hospital for check-ups, Ocon nearly suffered the same fate as the German.

At exactly the same spot the Frenchman also took too much kerb, which made his Alpine bottom out and sent the car heading straight for the same wall that Schumacher hit, the impact marks clearly visible.

But Ocon just managed to save it and keep the car out of the barriers, admitting afterwards that he was one degree of slip angle away from emulating Schumacher's shunt.

“I think one more degree and I would have been gone [into the wall],” Ocon admitted. “I would have had exactly the same thing that happened to Mick.

“Not nice. Not nice at all. I pushed hard; I didn't get the tyre up to temperature as much as I wanted. And yeah, I tried to get the lap time.” 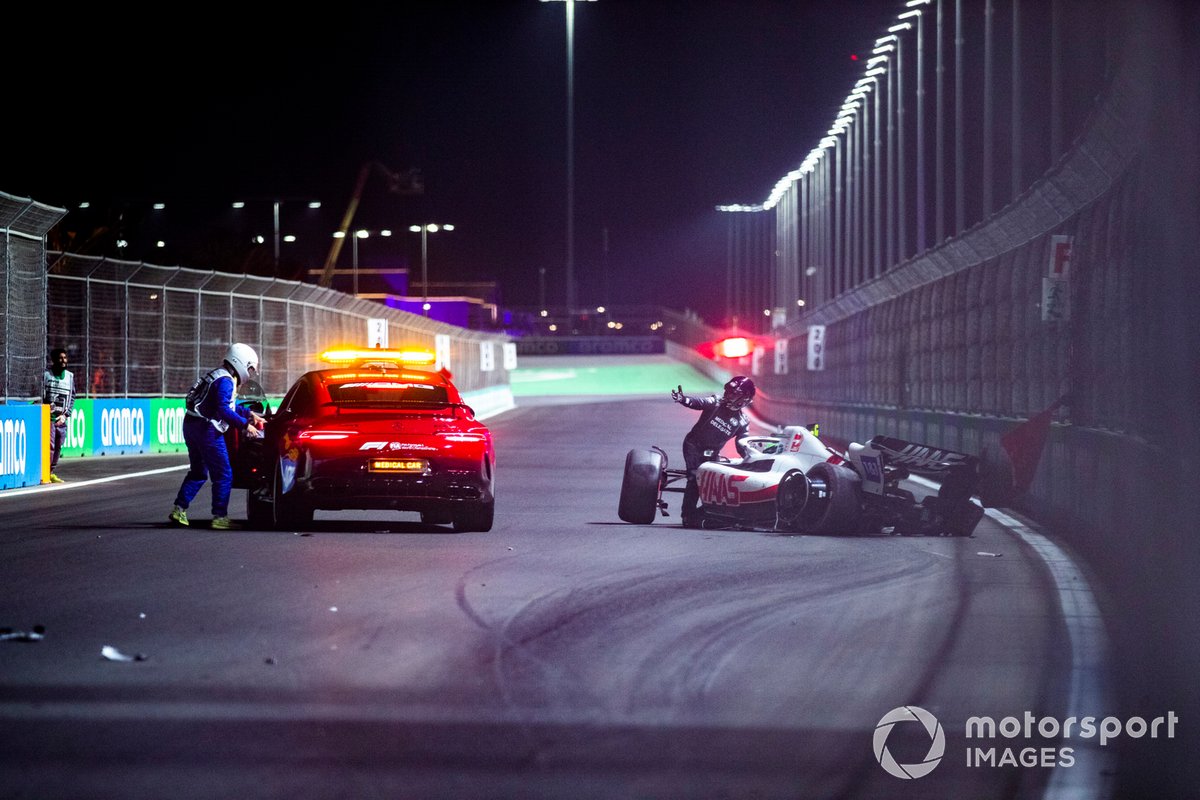 The medical team attend the crash of Mick Schumacher, Haas VF-22, in Q2

Ocon said that after his hair-raising near miss, which was caught on the TV broadcast, he decided enough was enough and aborted his lap.

Despite his “scary moments” Ocon starred by qualifying fifth for Sunday's race behind the dominant Red Bull and Ferrari cars, outqualifying teammate Fernando Alonso in seventh by a tenth.

“There's not much runoff, we know it – we know it's a risk and reward track, you need to push in quali,” he explained. “We've seen not all the drivers being aware of that, because there was no incident in practice. And once you push the limit very hard, you are very near them.

“Of course, there's a few scary moments but we know it's risk and reward, especially in that place.”

On Saturday night Haas confirmed Schumacher would sit out Sunday's race, preferring not to take risks with either its driver or with its spare parts situation, having to fly out its cars from Jeddah to Melbourne for the Australian Grand Prix in a fortnight.

Schumacher was released from hospital later that evening without any physical injuries.