Esteban Ocon paid tribute to Fernando Alonso for his role in helping him take a shock maiden Formula 1 victory for Alpine in Sunday’s Hungarian Grand Prix.

Ocon scored a surprise win for Alpine in a chaotic Hungarian Grand Prix, benefitting from the first-lap chaos before pitting for slicks instead of taking the standing start.

It meant he moved into the lead of the race when Lewis Hamilton pitted one lap later to make the switch, before holding his nerve to keep Sebastian Vettel at bay through the remainder of the race.

Ocon took victory by 1.8 seconds, aided by teammate Alonso, whose efforts to keep the recovering Hamilton back for 10 laps stalled the Mercedes driver's charge after he was running three seconds per lap faster than the leaders at points.

Hamilton eventually cleared Alonso for fourth place before passing Carlos Sainz Jr two laps later, but could not make up any more places, eventually crossing the line 2.7 seconds down on Ocon in third.

It marked the first victory for the Enstone-based team since Alonso won the Japanese Grand Prix at Fuji in 2008, and the first for a Renault-powered car since 2018.

Speaking after the race, Ocon paid tribute to the team and made note of Alonso's assistance in helping him win the race as he soaked up a standing ovation from the grandstands.

"What a moment, what a moment!" Ocon said. "It feels so good. It's the first victory obviously since the Renault group came back into Formula 1.

"We had some difficult moments this season that we overcame together with the team. We've come back to a fantastic place in Silverstone.

"And today, what can I say? it's fantastic. Congrats to Fernando as well, because I think the win is also thanks to him with the fights that he did. It's teamwork, all that. I think it's been a fantastic day." 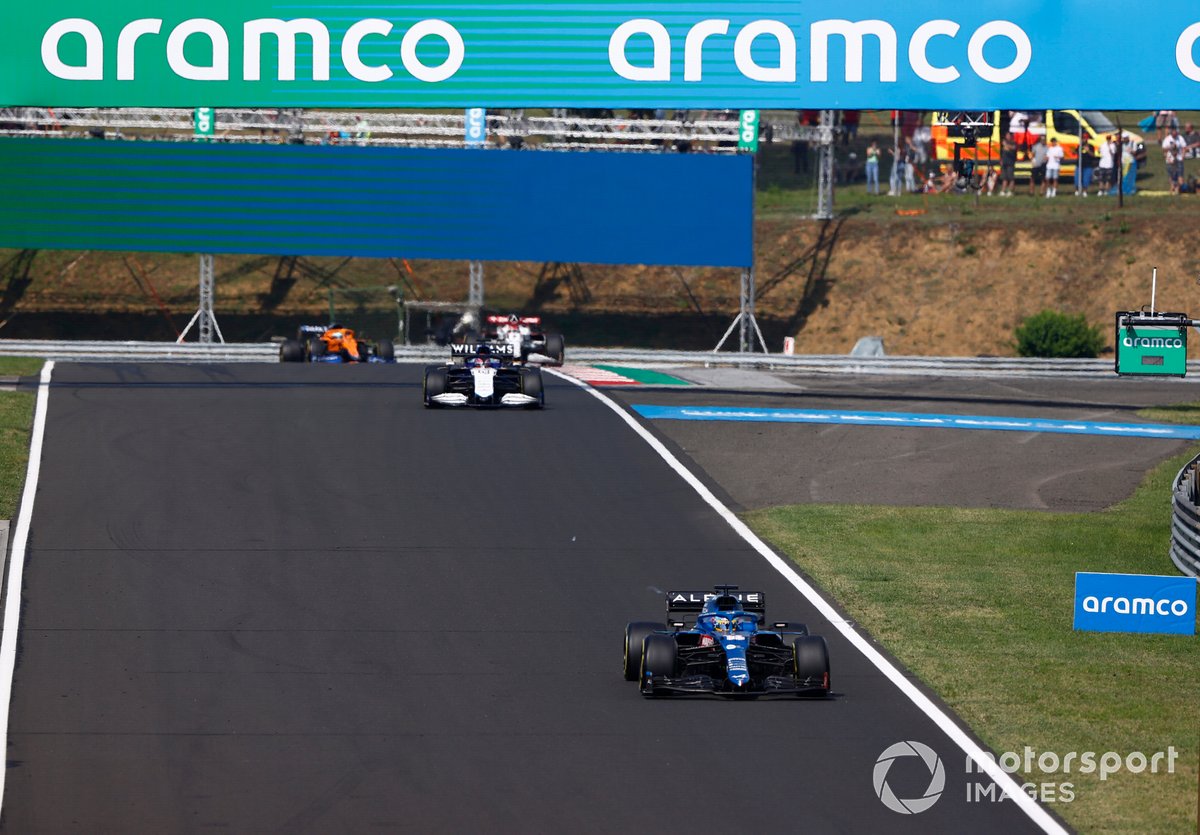 Alonso waited to meet Ocon in parc ferme before congratulating him, with Ocon saying they had formed a "sharp duo" together.

"We are working together, we are pushing the team to try and improve and get closer to the pack in front," Ocon said. "Everyone told me a lot of things about Fernando before I came, but, everything is wrong. I can tell you he is a fantastic guy inside working, and I'm really enjoying the collaboration we have together."

The result marked Ocon's second F1 podium after his second-place finish in last year's Sakhir Grand Prix, and came after a tricky run of form that had seen him suffer Q1 knockouts and go four races without scoring any points.

Ocon thanked the Alpine team for the trust it has placed in him and for helping through "difficult moments".

"When you are out in Q1, when you are P17, you don't know where you are exactly, but the team kept the big trust," Ocon said.

"We're back where we belong, so that's fantastic. Seb was mega quick the whole race, put me under big pressure. But yeah, we managed to hold him off so that was a great effort."