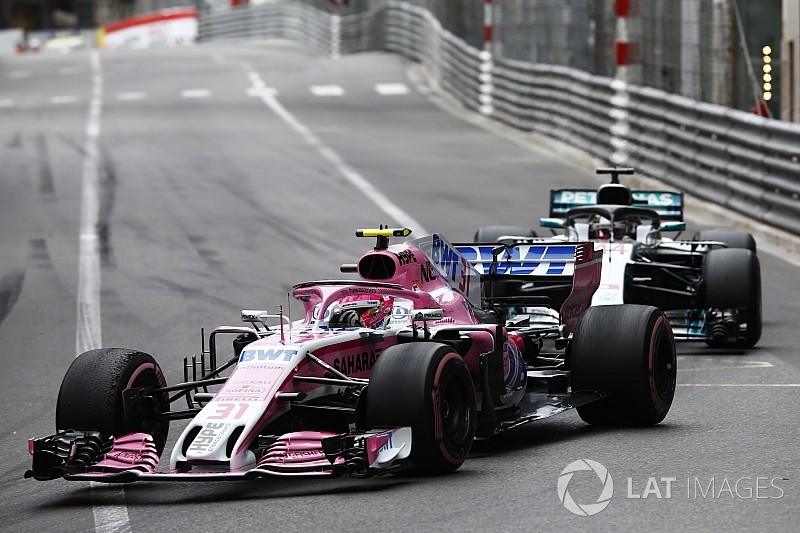 Force India has denied that Esteban Ocon was asked to let Lewis Hamilton by during the Monaco Grand Prix as a favour to Mercedes, after rival teams complained to the FIA.

Hamilton dropped behind Ocon after his early pit stop in Monaco, and when he caught up the Frenchman offered no resistance, the Force India driver letting him past coming out of the tunnel and heading into the chicane.

After the race Mercedes boss Toto Wolff reportedly suggested to a Belgian newspaper that he’d asked Force India for Ocon – a Mercedes junior driver – to let Hamilton by.

Subsequently it has emerged that a number of teams contacted the FIA, suggesting that there had been collusion between Mercedes and its customer team.

Following an investigation into the circumstances of the matter, however, the governing body decided that there was no merit in pursuing it further.

Force India COO Otmar Szafnauer denied that his team was helping Mercedes, and was simply focussed on its own strategy.

“The reason for that, I don’t care what Toto says, was we were running our own race, not against Lewis at the time,” said Szafnauer. “And we didn’t want to lose any time whatsoever.

"And it was Alonso who pitted just before and tried to undercut us, and what we didn’t want to do was lose any time at all with Lewis such that Alonso would have a chance to get us, which is why we told Esteban not to lose any time to Lewis.

"Because if you’re racing in your mirrors, you don’t go as fast. Even if it’s a couple of tenths a lap, it’s too much. And when you’re really close with some guy trying to undercut you, you can’t do it.

"What you can do is hold him back for five, six, seven laps, he gets you anyway, but now you’ve lost out to Lewis, and you’ve lost out to the guy you’re really racing. You’re not racing him on track because he’s pitted already, and you haven’t.”

Technical director Andy Green insisted that it was a regular practice for Force India driver not to fight faster cars in such circumstances.

“We do it all the time,” said Green. “When a fast car is coming through, we recognise that we’re not racing with them, and we don’t. We lose the minimum amount of time.

"Sometimes you can lose two seconds a lap when you’re trying to defend."

Ocon himself stressed that he knew there was no point in fighting with Hamilton.

“I was surprised that it became that much of a story, probably because there was no proper explanation after the race,” he told Motorsport.com.

“I think you now heard it from Andy and Otmar. It was not my race, Lewis had a 20 seconds advantage over me, had pitted already, fresh tyres.

“I didn’t want to lose time over Gasly and Fernando behind. That was my race at that moment.

Live: Follow qualifying for the Canadian GP as it happens