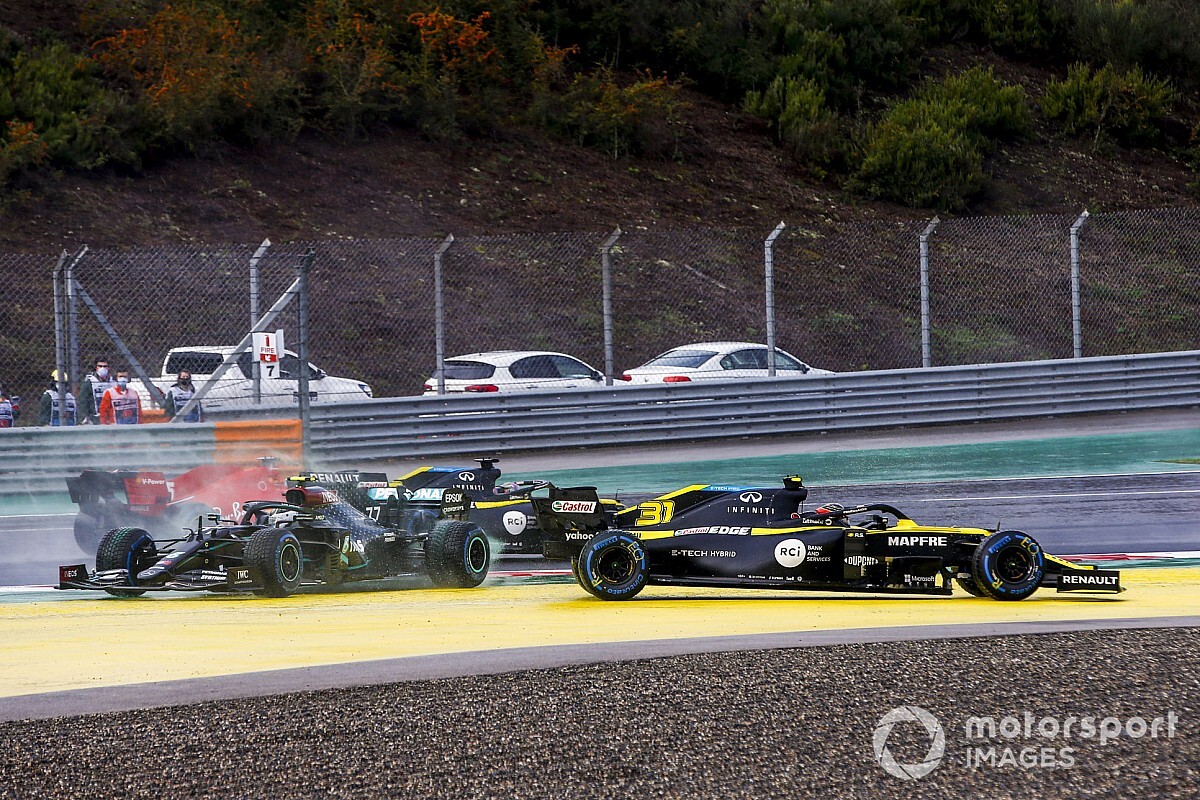 Esteban Ocon says that he made the best start of his Formula 1 season at the Turkish Grand Prix, prior to the tangle that wrecked his hopes of a good result.

The Renault driver made a good getaway at Istanbul from seventh on the grid to haul himself past a number of cars in front of him.

But despite the potential opening up for him to grab third place, it all went wrong when he got tagged and spun by teammate Daniel Ricciardo, who had had to move to the right to avoid a collision with Lewis Hamilton.

Ocon was able to recover and get going again, but then suffered further drama further around the lap when he was hit by Valtteri Bottas, who had made a mistake and slid into the back of him.

That impact gave Ocon a puncture, and a subsequent tyre change effectively derailed any hope he had of a points-scoring finish.

Reflecting about what had happened, Ocon said he was unlucky that his brilliant getaway put him in exactly the wrong place when Ricciardo had to avoid Hamilton.

"Unfortunately, we got a flying start and that was a brilliant thing, it was probably the best I've had in the year," said the Frenchman.

"Obviously I went to third, and I've had time to re-watch the video a little bit, and it's just a very unfortunate incident obviously in Turn 1.

"Lewis was on the inside of Daniel and Daniel opens the steering. Then he touched me on the rear, and that what makes us spin

"I got going again, and I was still in pretty good shape, but then I got hit by Valtteri into Turn 9, who missed the braking point again. So twice the same! But that time, I had to pit because of the puncture."

Ocon said the double blow of the opening lap was especially frustrating because the pace of his car afterwards had been so good.

"Even though no safety car, we still came back to P11. We were a long way off [after the first lap] so the pace was very solid.

"And I think there were was some good points on the table for us. It's just I seem to have a lot of bad luck recently. I hope that will turn around."

Asked what he felt would have been possible if he had made it through the first corner without drama, Ocon reckoned that a top five finish was on the cards.

"I don't think we could have held third place for very long, but at least we were looking good from there," he said.

"Probably, yeah P5 or P6 was a realistic target. I think with the pace that we had, it would have been good to end up there."