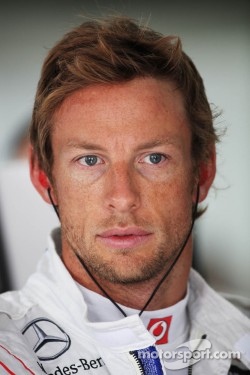 Jul.22 (GMM) Jenson Button has joined his teammate Lewis Hamilton in hinting McLaren should rethink the basics of its car's aerodynamic concept.

After a poor British Grand Prix, 2008 world champion Hamilton intimated the foundation of the struggling MP4-27 is flawed.

"You've got to look at the cars in detail -- just look at them and ours looks different from the others," he had said.

Hamilton was undoubtedly referring to the 'stepped noses' that are seen throughout the 2012 grid, except on the McLaren and the McLaren-linked backmarker Marussia.

McLaren then seemed to take a step forward at Hockenheim with a major upgrade, before both Hamilton and Button struggled for pace in the wet qualifying.

Button was then asked about McLaren's visibly different approach to its 2012 car.

"I'm sure you can make it work with a drop nose like other people or else every other team wouldn't be running it," he is quoted by Express newspaper.

"Our guys at the time thought this was the right direction. Whether they think so now or not I don't know. I'm not sure they would tell me anyway," he added.

Team boss Martin Whitmarsh, however, warned that even McLaren's German Grand Prix hopes can't be written off yet.

"They tell me tomorrow (Sunday) will be dry, so I think we can be competitive," he said.