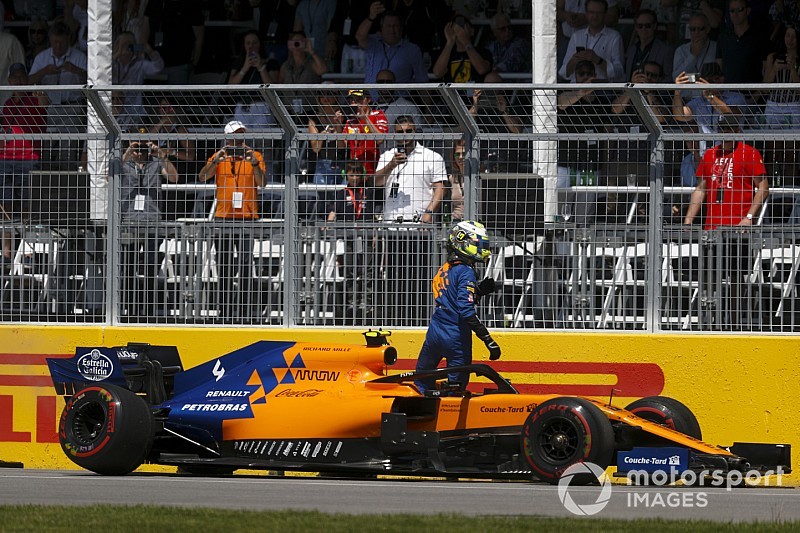 Overheating brakes set in motion a chain of events that led to the suspension breakage for Lando Norris in the Canadian GP, his McLaren team has said.

Norris retired when his right rear suspension collapsed as he crossed the line at the end of his eighth lap.

He stopped just past the pits with a small fire visible around that area of the car after running wide at the final corner.

He had gone straight across the Turn 3-4 chicane earlier in the lap, an event that the team believes signalled the start of the brake issues.

After a detailed investigation, the team has concluded that high brake temperatures ultimately triggered the fire that created the suspension breakage.

"We had high temperatures in the brakes," a team spokesman told Motorsport.com. "That caused a component failure, which basically created a localised fire.

"Because it was in an area where there isn't any air flow, it didn't get extinguished, and basically we exceeded the temperatures that carbon can withstand, and effectively that led to the suspension giving way.

"We're clear about what happened, so it's not an ongoing issue – it was a singular event."

Norris's problems were not connected to a brake temperature issue that caused an early stop for teammate Carlos Sainz.

"Carlos had brake overheating caused by a tear-off, so it wasn't related at all. We removed that and it returned to normal," the spokesman added.

Schumacher's Ferrari F2002 to be auctioned in Abu Dhabi