At Monza Ricciardo snatched the lead away from Red Bull's polesitter Max Verstappen at the start and managed to keep the Dutchman at bay during the first stint.

After Verstappen and Lewis Hamilton collided, Norris made it a McLaren 1-2, which the pair defended from Mercedes' Valtteri Bottas and Red Bull's Sergio Perez until the finish.

Ricciardo's win is McLaren's first since the 2012 Brazilian Grand Prix, and the team's first 1-2 victory since Canada 2010.

Norris, who is a long-time McLaren protege and made his debut with the team in 2019 after it came out of a difficult period, said the result was even more meaningful after the journey the Woking team has been on over the past decade.

"I don’t know where to start, I think it is incredible," Norris said.

"A bit lost for words in a way but I’m happy for myself, to be here again, to have executed the race the way we did, with the overtakes and the strategy and the defending. But yeah, happy for Daniel and the whole team because it’s a pretty awesome achievement for all of us.

"I’ve been part of McLaren for a bit longer, so to be on this little journey we’ve had together already to go from one podium a few years ago to a few more this season and now a 1-2, it’s pretty insane to think of." 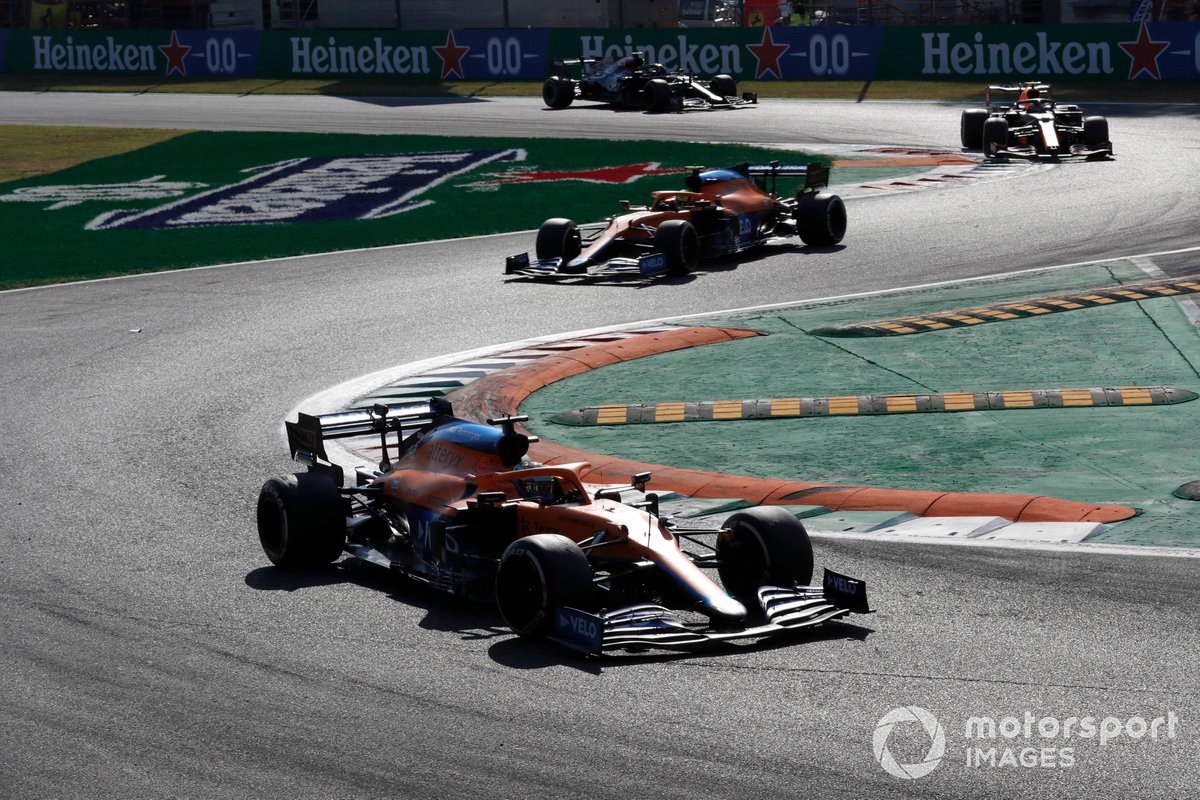 McLaren is not the first midfield team to win a race over the past 12 months, with AlphaTauri's Pierre Gasly taking a shock win at the same track last year, and Esteban Ocon grabbing his maiden win in Budapest this season.

But while luck played a significant role in those wins, Norris feels McLaren was good value for its record 45-point haul given it had already been on the front foot in Friday qualifying, after which both Norris and Ricciardo made progress in Saturday's 18-lap sprint.

"I think a lot of times you’ve seen other people win, it’s because of a bit of luck here and there but I think all weekend we’ve just done a very good job," he argued.

"We were in the right place at the right times, we’ve done a good job of the strategies. Yesterday we put ourselves in a better position and with my side getting ahead of Lewis, with Daniel getting past two cars he put himself in that position.

"We had a fast car and we maximised everything we had, so I don’t think there was any luck with what we did this weekend.

"We bounced back well from Zandvoort, from one of our worst races of the season and we just did a perfect job this weekend.

"There was no luck with it, which I think makes it definitely a bit sweeter because it’s just deserved."

McLaren confident Norris will be fit for F1 Brazilian GP