Lando Norris says his third-place finish at Imola still "blows my mind" given McLaren's pace compared to its Formula 1 rivals, calling it "one of my best podiums."

Norris recorded McLaren's sole podium of the season so far at the Emilia Romagna Grand Prix back in April, crossing the line third behind the Red Bull duo of Max Verstappen and Sergio Perez.

Norris had qualified third on Friday in wet conditions, less than two-tenths off pole, and finished the Saturday sprint race fifth behind the Red Bull and Ferrari cars.

Looking back on his season so far in an interview with Motorsport.com, Norris admitted that he still found it hard to believe he managed to finish third given the performance level with the McLaren MCL36 car.

"I still don't know how I got a podium with the car that we had!" said Norris.

"It still blows my mind, considering how much quicker a lot of the other cars were. Like now, when I think of it, I think it's probably one of my best podiums.

"[In] wet qualifying, it was a pretty awesome lap in quali, but when you see the speed of the Alfa Romeo, it was like, half a second a lap quicker than me in the race. If we did a race of just pure pace, I'd probably be like 15th or something! But I finished on the podium.

"It makes it that bit better. It was good to see that we made some improvements, we were going in the right direction, and that always gives you more motivation, more hope, and it's something you look forward to in the future.

"That was definitely a good thing, and just good to see that we could turn things around fairly quickly."

The result came just three races after both McLarens finished outside of the points in the Bahrain season opener, flaring concerns the team could be in for a long season playing catch-up against its midfield rivals. 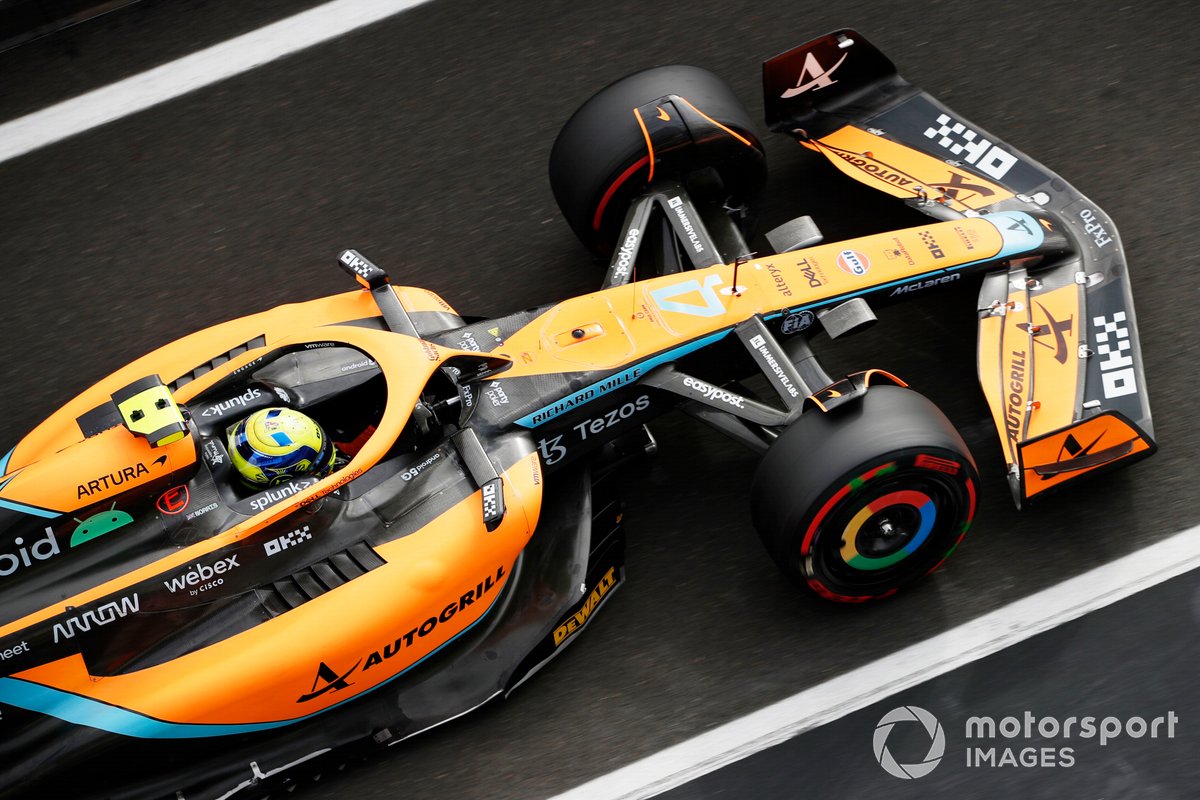 Norris has been open about his need to adjust his driving style to accommodate the MCL36, which has also proven difficult for teammate Daniel Ricciardo to get to grips with.

McLaren sits fifth in the constructors' championship heading into the final nine races of the season, trailing Alpine by just four points.

Although Norris conceded McLaren had been "a bit up and down" so far this year, its form varying from track to track, he was impressed the team had managed to hang on in the fight against Alpine for so long.

"Considering we're just down to fifth in the championship, that surprises me that somehow we were fourth, with Alpine - I remember Fernando was almost going for pole in Australia," Norris said.

"Early on in the season, they had a very strong car. Just a lot of people made a lot of mistakes with crashing, [Alonso] had a failure or whatever with the power steering.

"We've also done a very good job, disregarding the car. Everything else has been a good step this season, in how everyone is working, with strategy, pitstops. We had three fastest pitstops in the first four races or something. In other areas where we can continue to improve, I think we've done a very good job.

"That also makes me happy and gives me good belief that as a team, we're heading in the right direction. It's just the very, very tricky bit which is the car that is not going as quickly as what we'd want."