Villeneuve says Vettel's run of titles is over.

"He's not going to win this year for sure," the French Canadian, who is set to return to the Indy 500 this year at the age of 42, is quoted by Italian publications including Autosprint and La Repubblica.

"To me, Renault seems completely lost and unable even to finish a Grand Prix.

"Even if they (Red Bull) are making a new car for the European races it won't change anything -- maybe they'll do 30 laps instead of 15. It's not the car but the engine.

"I'm joking, but why bother going to Australia? They can't do half a Grand Prix and are slower than most.

"Williams now has the Mercedes and it's only because of that they're doing so well.

"It's good for (Felipe) Massa, because he was finished and for a few years didn't even seem like an F1 driver. I think that shows just how good his car is. 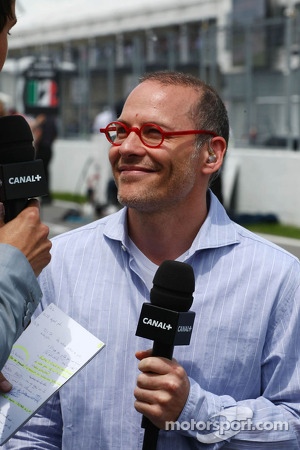 "We'll have to see if they also have the money to develop."

Beyond that, however - and Mercedes' obvious advantage - the former Williams and Honda driver is not entirely sure what will happen in 2014, as F1 undergoes its technological revolution.

"I don't know if it will be a great championship. It could even be funny," said Villeneuve, "because in Australia we could see a Marussia on the podium."

He thinks Kimi Raikkonen's move from Lotus to Ferrari for this year, even though he will be partnered by the excellent Fernando Alonso, was a good one.

"For the first time, I see him working seriously. Maybe his year without pay was good for him," said Villeneuve.

"Alonso is a fighter from the first lap and so he might use too much fuel," he explained. "It also depends on the attitude that he (Alonso) has.

Villeneuve also predicted a tough season for confused spectators, and thinks F1 has missed some obvious opportunities to spice up the action.

"The fuel limit is a good idea," he is quoted by La Repubblica, "but it should be the drivers saving fuel and not the electronics."

Villeneuve admits Mercedes is the obvious 2014 favourite, but said the Brackley squad's weakness is the driver lineup.

"Hamilton and Rosberg are not friends," he said, "but to me it seems entirely too flat, without a spark. It has to be tougher than that between teammates."

And unlike Red Bull, Villeneuve says Ferrari cannot be written off yet.

"At the moment it's not the best car, but it's not so far back," said Villeneuve. "They can recover. We'll know much more after five races."

A reinvigorated Williams starts the season in Australia