No one better on market to replace me - Massa

Sep.8 (GMM) With Ferrari still yet to re-sign him for 2013, Felipe Massa insists he sees no better alternative to him on the market.

Rumours say Nico Hulkenberg and Sergio Perez are the frontrunners to replace Massa next season, but the Brazilian thinks he is the best choice. 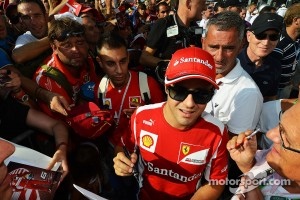 "Many people want my seat," he is quoted by Spain's Mundo Deportivo newspaper, "but I do not see anyone better on the market.

"In my place I only see people like Hamilton or Vettel, but they're not available," Massa added.

Meanwhile, the 31-year-old said he will do everything to help his teammate Fernando Alonso win the 2012 title, even if he acknowledged he might be racing elsewhere next year.

"I am a professional and will behave like that."

Massa hailed the performance this year of Spaniard Alonso, who at the wheel of the same Ferrari model has scored a massive 129 more points, and is leading the championship.