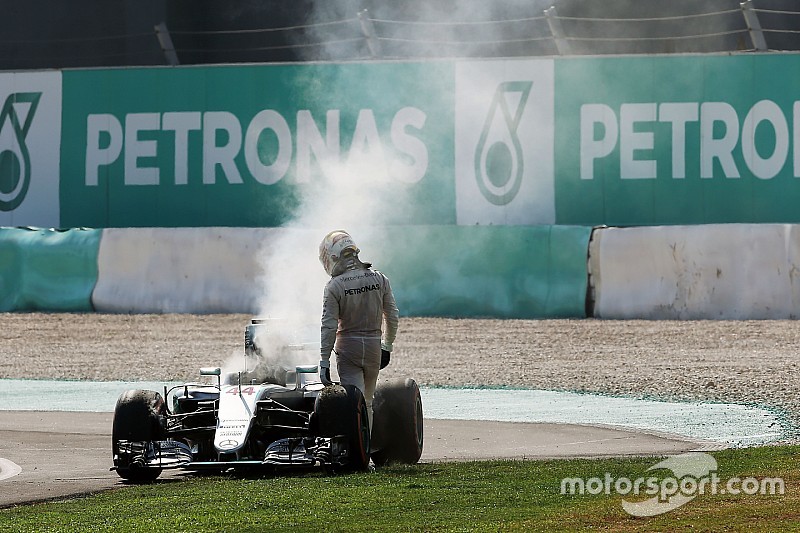 Mercedes says it cannot find a link between the engine failures that Lewis Hamilton has suffered this year, as the world champion seeks answers for his latest disaster.

Hamilton's world championship hopes suffered a setback at the Malaysian Grand Prix as he retired from the lead of the race with engine failure, as rival Nico Rosberg scored more points to extend his lead in the title chase.

Following some hard-hitting comments after the race, as he suggested something 'odd' was going as to why he was the only Mercedes-powered driver to have experienced such trouble, Toto Wolff says the German car manufacturer is at a loss to explain what is happening.

"It's interesting, as most of the failures were not linked to each other," said Wolff when asked by Motorsport.com about the outcome of previous investigations into Hamilton's reliability dramas.

"They were different failures - and it was failures that were either in the supply chain, or they were material problems, or assembly problems or just a mistake in the design or fatigue, below the mileage where it should have been. There's no pattern in those failures that we can identify."

As well as the Malaysian GP blow-up, Hamilton's title campaign has suffered setbacks with a spate of MGU-H failures earlier in the campaign which hurt his qualifying efforts in China and Russia.

Another impact of those failures was that Hamilton had to take extra engines on board in Belgium, which forced him to start from the back of the grid.

Wolff confirmed that Hamilton's engine blew up during a phase of the race where the British driver was pushing flat out to extend his margin over the pursuing Red Bull drivers.

It could be that the extra demands being place on the power unit by doing that pushed it over the edge.

"He was flat out back then," explained Wolff. "We needed to build the 23-second gap to allow a free pitstop.

"Red Bull did everything right today, pitting Verstappen when they did. They had two cars to play the gamble with the virtual safety car period - and then there was the risk at the end that they would leave one out on the hard to try to make the one-stop - which would've been extremely difficult.

"They still could have tried it with one of the two, and pit the other one. So we were trying to extend our stint and it was going in the right direction because we were building that gap.

"But just before it was enough, just before we were about to pit him, the engine blew up."

Wolff admits that the mechanical problem for Hamilton – coming at such a crucial time in the world championship battle – was a hugely frustrating thing for the team.

However, he had no concerns that the title battle would be tainted by Rosberg being gifted points through the mechanical dramas that Hamilton has had.

"It is a mechanical sport, and these things happen," he said. "I remember in 2014 when Nico had the failure at the start of the last race, and it's frustrating that it comes at the crucial moment in the championship and we are letting him [Lewis] down this year - it's him this year.

"But I don't think it would have put any shadow on the championship. Of course, people will want to say he [Rosberg] was the luckier driver in terms of mechanical reliability, but then he had some great drives - like in Singapore last weekend.

"But, you know - the championship isn't over yet, it's five races to go. Lewis had a massive blow to his campaign, that's clear - but let's see how it finishes.

"Let them battle it out on track, hopefully without any reliability problems in the next five races, and when we'll see where we are."