No issues with Halo visibility at Eau Rouge - Rosberg 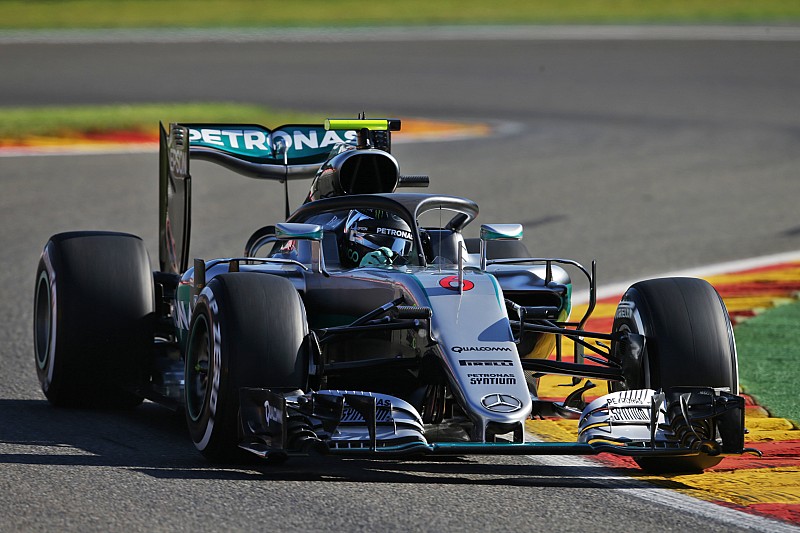 Eau Rouge's unique undulation produces 'no problem' in visibility terms for drivers using the Halo, says Nico Rosberg after testing the device on Friday at Spa.

The FIA was keen to see what sort of impact it had on visibility at a track with undulations, and specifically Eau Rouge.

All drivers who ran with it have been given a questionnaire compiled by Charlie Whiting to fill with their impressions of the device.

Most experiments with the Halo have been simple installation laps, due in part to concerns about overheating caused by it impacting airflow.

However, Nico Rosberg ran several flying laps over two runs, and even set his best time of the session with it fitted.

"It was good to try it and they have done a good job with it because it doesn't disturb me at all when I am driving," Rosberg told Motorsport.com.

"It just increases the safety a lot. I know it is not nice looking from outside of course, because it doesn't make the cars prettier, but in terms of safety I think it is a good thing."

Rosberg said there was no issue at Eau Rouge: "No problem at all. It is easy. You don't even notice the top part. I think they can come down with that, because LMP1 is lower anyway – so for sure we can see. No problem."

Daniel Ricciardo, who had previously tried Red Bull's own Aeroscreen alternative, had no concerns.

"I think it is not too bad," said the Australian. "It is definitely a work in progress. It was the first time I have run it, as I ran the Aeroscreen, so it is definitely different again.

"But it was definitely good to test it here. I think it is good we can test until the end of the season and give feedback.

"I will give some feedback tonight, we have been given a sheet, so a bit of homework! First impressions were not too bad, there are still some things to work on, it is not unexpected for now. Generally speaking not too bad."

Force India's Nico Hulkenberg said he would like more laps with it.

"It was a weird feeling, and to have something there which limits you was obviously a new experience. I have to say visibility wasn't too bad, I don't think that was an issue.

"It will take time to get used to, and also I did an installation lap, so that's nowhere near enough to properly understand.

"For sure we need more time and more testing to get a better picture."

Carlos Sainz was the fourth driver to try it today, and he too reported no visibility problems at Eau Rouge.

Pirelli plans to use safer construction from Malaysian GP