Nick Fry steps down as CEO of Mercedes AMG Patronas

The MERCEDES AMG PETRONAS Formula One team today announced that Nick Fry, the team's Chief Executive Officer, will step down from his current position at the beginning of April. He will continue to assist the team's commercial operations as a consultant until at least the end of 2014. 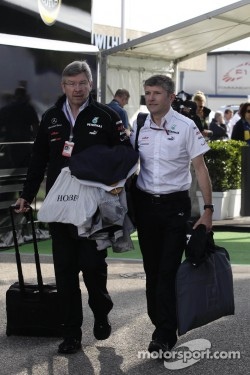 Toto Wolff, the team's new Executive Director and 30 per cent shareholder, will therefore take a greater role in the day-to-day running of the team alongside Team Principal Ross Brawn, assuming the areas of responsibility previously held by Nick.

"I feel very privileged to have had the opportunity to work with our team for the last 11 years and remain extremely proud of the fact that we took the team to its first race win and especially the double World Championship in 2009.

Equally important is the success of our commercial activities as we have managed to gain the support of some of the most important companies in the world, thereby building a strong foundation for the future success of the team," said Nick Fry. "I believe that MERCEDES AMG PETRONAS offers the best sponsorship proposition in Formula One and I look forward to continuing to assist the team and its partners over the coming years."

"I would like to thank Nick for more than ten years of service to the team in Brackley," commented Toto Wolff. "MERCEDES AMG PETRONAS enjoys a strong network of global, blue-chip partners who want to be associated with Mercedes-Benz in Formula One and we will work hard to retain our loyal partners while also attracting new names to the sport in the future. I am pleased that Nick will remain close to the team to support us in achieving these targets."