Next challenge is fatherhood for F1's Horner

Christian Horner and his partner Beverley are expecting to be parents.

It emerged on Wednesday that the 39-year-old Briton and his partner Beverley are expecting to be parents.

"I'm not the first one this has happened to," he smiled to Germany's Auto Motor und Sport.

"I'm very happy about it -- it's going to mix things up!" added Horner. 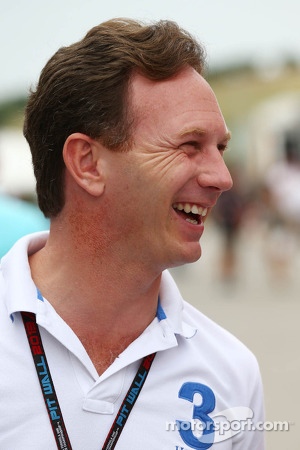 The German publication on Wednesday said Horner was also caught by surprise when, whilst attending the premiere of the movie 'Rush' recently, he received a telephone call.

The call was to let him know that Red Bull's Dr Helmut Marko had just begun an appearance on Austrian television to announce Daniel Ricciardo's 2014 signing.

13 minutes later, Horner had arranged the distribution of an official press release -- with quotes attributed only to himself and British countryman Adrian Newey.

Lotus, meanwhile, had a bizarre reaction to Wednesday's news that it has lost Kimi Raikkonen to Ferrari.

On its official Twitter account, the team posted a photo of two rabbits having forceful sex, with the caption: "So Kimi is off to Ferrari for 2014; it hurts a little bit".

Elsewhere in F1, beating Horner to fatherhood was Williams driver Pastor Maldonado, who has been back-and-forth between Europe and his native Venezuela in past weeks to check on his heavily pregnant partner Gaby.

Baby Victoria was born early on Friday, while 2012 Spanish Grand Prix winner Maldonado was readying for Friday practice at Monza. 'Victoria' is the Spanish word for victory.

Meanwhile, it is believed New Jersey, although absent from the draft calendar that did the rounds in the Monza paddock, could find its way onto the next iteration of the 2014 schedule.

F1 chief executive Bernie Ecclestone denied distributing the 21-race calendar that found its way into the hands of team bosses and journalists at Monza.

"We have 22 (races) actually now," he told the broadcaster Sky.

Germany's Auto Motor und Sport believes the 22nd is New Jersey, which would take its place either immediately before or after the Canadian Grand Prix.