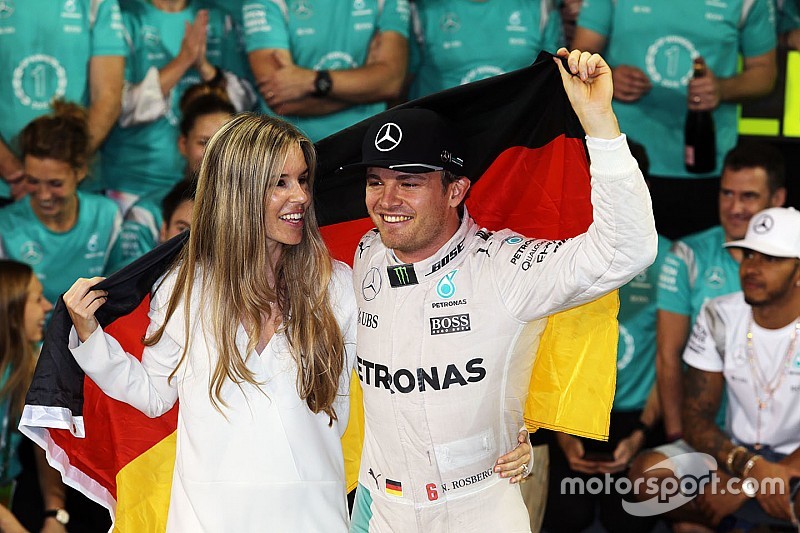 Nico Rosberg has announced he will retire from Formula 1 after securing this year's world championship.

The Mercedes driver made his announcement during the FIA world champions gala on Friday in Vienna, just five days after securing his title.

The German said that, having achieved his childhood dream, he felt it was the right time to stop.

"For me it is a very special day to receive the trophy. This evening is going to be amazing but for another reason: I want to take the opportunity to announce the end of my F1 career," said Rosberg.

"Since I was six years old I had a clear dream, that was to become F1 world champion and it was very clear in my mind, whatever I could think, I have achieved it. I will remember forever.

"I have achieved this childhood dream now, so I'm not willing to do more commitment. I don't want to do it again. I have decided to follow my heart.

"I want to call it a day and go on to other things and it feels right to me.

"I feel excited, my wife is excited. Thank you very much for the support these years."

Rosberg said that his only regret regarding the announcement was that it put his Mercedes team in a "difficult situation" - the German having originally been signed through to 2018.

"For me personally [the decision] is not that difficult, it feels right," Rosberg said.

"The only thing that makes it [difficult], I am putting my racing family into a challenging situation and that is the hardest part for me."

Elaborating on how the idea to retire came about, Rosberg said: "It was after Suzuka. In Suzuka, it became my title to lose - and that is when the pressure really started also, and when I started to think about this: 'If I do achieve my childhood dream, then it would be great to end there.'

"This year was the best I can be, definitely. In the preparation and anything, I put everything into it.

"I achieved what I set out for. It is clear from six years old, starting off in go-kart, it was dream already, inspired by my dad, and all the way through. There it was more a childhood thing, going for that – I have done it and I am so happy.

"At the same time, it was a very, very tough year and I don't want to do that again."

His retirement means Mercedes will have an opening alongside the Briton next year.

"This is a brave decision by Nico and testament to the strength of his character," said team boss Toto Wolf.

"He has chosen to leave at the pinnacle of his career, as world champion, having achieved his childhood dream. The clarity of his judgement meant I accepted his decision straight away when he told me.

"For the team, this is an unexpected situation but also an exciting one. We are going into a new era of technical regulations and there is a free Mercedes cockpit for the seasons ahead.

"We will take the necessary time to evaluate our options and then find the right path for our future."

Massa column: A goodbye to F1, but not to racing