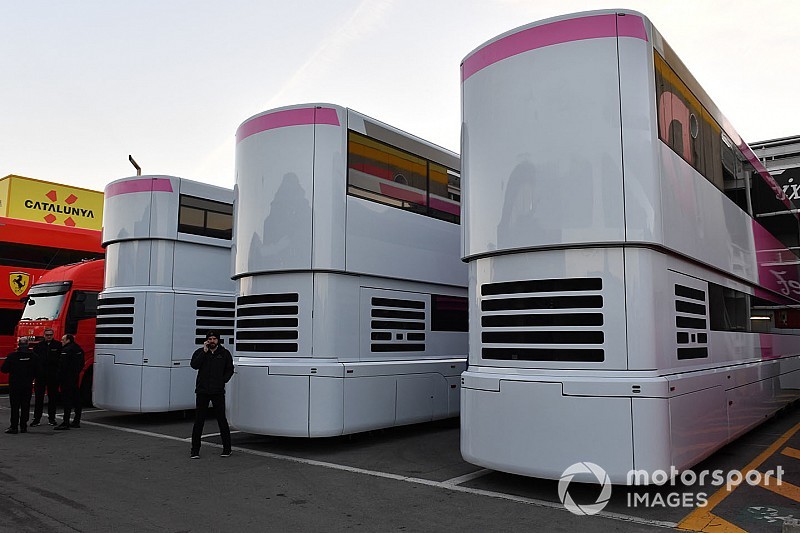 Racing Point had expanded its Silverstone site ten fold after acquiring land on which to build its new factory.

The team recently purchased 27 acres of farmland that encompasses the current three-acre site where the team has been located since the summer of 1991, and its early days as Jordan Grand Prix.

Construction will start after planning permission has been confirmed, with the front of the factory facing the Dadford Road that leads to the Silverstone Circuit's main gate.

Land on the other side of the current factory, which now features some industrial units, is still owned by Eddie Jordan.

"It's just next door," said team principal Otmar Szafnauer of the expanded site. "We don't have planning permission yet, but we hope that's forthcoming.

"We're working on the plans now, to apply. There's a six months process to go through all the necessary steps, and we're probably three to four months into that process before we apply for planning. Once we have permission, then we'll start.

"I think it will take about two or two and a half years, probably two years from now, for us to finish the new factory, and then we're going to move in.

"We have three acres of land, and we bought the 27 acres that go around it. So now we have 30 acres."

One of the key goals is to have the entire team on one site, because the aerodynamics department is currently based at the team's Brackley wind tunnel, some seven miles away.

One complication that the team faces is that it is planning a new base just as F1 heads into the era of cost caps post-2021, and thus it's not easy to specify exactly what type of facility it will need.

"We've got to right-size it, but I don't know what that is. Unless you know the regulations, it's hard to know.

"How do we know how big to make the factory, how little to make it, what to include, what not to include?

"What we do know is that the building we're in, with the people we have, is too small. That we know for sure. What we don't know is do we need a new wind tunnel?, for example.

"So we bought enough land so that we can expand or contract as needed, based on the regulations."

Szafnauer says that even the team has some way to go to reach the level that a cost cap is likely to be pitched at.

"We have some insight as to what 2021 will look like, even with a cost cap. And even with the cost cap that's been talked about, we will need more space. Right now we are about 300 people on one site, and another 100 on another.

"We can't really fit many more than 350 in the site where we're at, and we're already 425. Even if we stayed the same size we'd need a new building to get everybody together. But I think we're going to grow. So wherever the cost cap comes out, I think we'll be way under it, and we'll start growing.

"Somebody told me today that from a human resource perspective we are the second smallest team. I think Haas has less people, but they spend more money. So from a budget perspective we're probably still the lowest, and from people we're the second lowest."