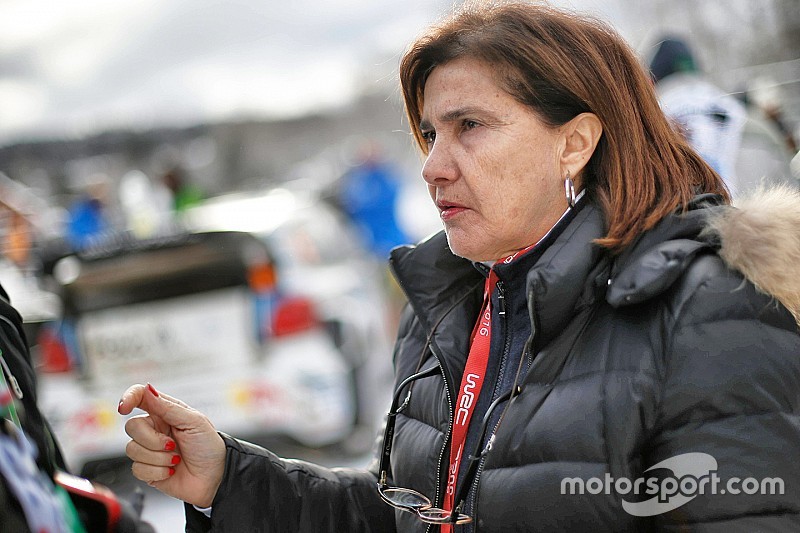 There are few more qualified to talk about women in racing than Michele Mouton, but the former WRC runner-up admits she isn't fully certain a girl will ever be able to make it to the very top in Formula 1.

Mouton has a very strong claim to being the most successful female participant ever in top-level motorsport. Besides winning four WRC rounds with Audi in 1981-82, she was a class winner in the Le Mans 24 Hours in 1975 and the winner of the Pikes Peak hillclimb a decade on from that.

These days, she is best known for being the President of the FIA Women in Motorsport Commission, which had its most recent seminar in Lisbon in October.

There, she spoke exclusively to Motorsport.com about her thoughts on the girls currently chasing their F1 dreams - and why she thinks there may never be a woman at the very top of Grand Prix racing.

What do you think of the existing crop of female drivers racing in junior single-seaters?

"They are improving a lot, but just like the boys, they need budget and equal material to succeed, and it’s not easy. Single-seaters isn’t the discipline where we have the most women, but I am very confident that Marta Garcia, who has started now in Formula 4, can go much further.

"She has been very successful in karting, she’s still very young, and I think she’s promising."

Can Garcia go all the way?

"It’s difficult to say, but she has started very well. We ran three CIK [karting] events last year, and she finished second in the third one, which isn’t bad. It’s a good start, now we’ll see how she does in Formula 4."

What about some of the more experienced girls?

"And for women it’s even harder, because the base is so narrow. But there are more women and girls who want to get involved, and I think this is the best way – more volume."

Are you satisfied by the number of girls that have reached the single-seater ladder in recent years?

"It has increased, but it’s mainly the girls who are suffering for budget. We have Lucile Cypriano for example, who won in the SEAT Leon Eurocup last year against 34 boys. This year she didn’t manage to find the budget for the season. She has the potential, but what can you do?"

"No. We are here to promote them and support then, but we can’t sponsor them. We can help with [them finding] money, but from a different angle – by talking to manufacturers, with media coverage. But we cannot support every girl financially."

Susie Wolff recently said there’ll be a female driver in F1 within 10 years. Do you agree?

"We have to be ambitious and hope it will be like that. But I personally think it’s difficult to give a date. You have to start at the grass-roots, and what Susie is working on with Dare To Be Different is really fantastic, opening the minds of young girls.

"But they have to have the same possibilities as the men, and this depends on budget as well as finding the right person [to reach F1]. It’s not easy.

"We’ve seen women in F1 a long time ago, but personally I’ve never been absolutely sure we’ll see a woman at the top in F1. I think we will see women in the middle of the field, but not at the very front.

"We are different to men, and there is a difference when you feel the speed. So I am not convinced yet. And that’s nothing to do with taking risks – it’s just, for me, a different sensitivity. Physiologically we are different, and this difference comes in when you are talking about top speeds.

"If you had four boys and one girl testing an F1 car on a certain track, and you told them all that a certain corner is taken flat out, I’m sure the four boys would go flat out straight away. The girl would try and work out for herself if it can be taken flat out.

"It doesn’t mean she can’t do it, it just means there is a little difference [between the sexes] when it comes to driving at top speed."

Do you think this applies to rallying as well?

"The top speed you reach in rallying is about 200km/h, which is not what I would call real top speed. When you talk about 320, 330km/h, then it’s a little bit different.

"I say this because I experienced Le Mans, and in my time [before the chicanes were added] the Mulsanne Straight was nearly 7km.

"I was never so scared as when I was going in a straight line – because you can feel it when you go at those speeds; you know there is nothing you can do [to prevent a crash] if something happened.

"That year, it rained, and in the corners I loved it. But in a straight line, just doing nothing except for waiting, I didn’t like it. It’s not a question of the type of car, just the top speed."

If a team boss in F1 said they were desperate to run a female driver, how would you respond?

"I would say: give me time! Because I would need to find the right person, and you can’t just put a girl in F1 for the sake of it. She has to start from the bottom and prove herself in single-seaters, just like for the boys. They have to show they are capable."

Would a female-only series like Bernie Ecclestone has suggested be a help?

"For me, no. When you have the possibility to be at the same level [as boys], I don’t see the point. When you are behind the wheel, who can tell if you are a man or a woman anyway, unless you wear a pink helmet? I don’t see any reason to segregate girls.

"At the end of the day, you are racing on the same track, and even if you have a female-only series, people will still compare the laptimes with those of the men."

Analysis: Is Lewis Hamilton right to say that Mercedes F1 team "disrespected him"?